Words of Solidarity and Leadership Stir the Women’s March

So, there was this march the other day. Nothing major. Just held in 18 cities across the globe. No big deal. Just millions of focused, determined and fed-up women and the people who love them, all showing up in solidarity acres deep. The marchers were inspired by the caliber of women – both on stage and a shoulder away – who showed up to support. Organizers were galvanized by the numbers of women present and the fortitude of their spirit.

Yes, Tarana Burke’s #MeToo movement certainly supplied the magnetism and the electricity that made this year’s anti-Trump action irresistible to those now seeing how urgent the need for change is. No longer can women and girls be harassed and victimized with impunity, for sure. But many women are mothers, and they worry about their DACA children or their neighbor’s children. People are angry about the lack – still – of equal pay for women, the rolling back of voting rights and panels of men making decisions about women’s bodies. So yes, they came, they stayed, they spoke and they also listened. And wise words from three wise women, Sen. Kamala Harris, Rep. Maxine waters and actor Viola Davis were among the remarkable things they heard.

“When I look out at this incredible crowd today, I know one thing: Even if you’re not sitting in the White House, even if you are not a member of the United States Congress, even if you don’t run a big corporate Super PAC, you have the power. And we, the people, have the power. There is nothing more powerful than a group of determined sisters marching alongside their partners, and with their determined sons, brothers and fathers, standing up for what we know is right. Here’s the thing: We know that it is right for this nation to prioritize women’s issues.

“In the words of my fellow American, Malcolm X, I’m going to make it plain: In 1877, America, the greatest country on this planet, put laws in place called the ‘Jim Crow laws’. And the Jim Crow laws restricted the rights to quadroons, octoroons, and there were Blacks, Hispanics, Indians, Malays… restricted medical, restricted relationships, restricted education, restricted life! It told us that we were less than and it came on the heels of the 13th Amendment. It came on the heels of 55 individuals, great Americans, writing the greatest document called The Constitution of the United States, saying, ‘We the people.’

“Now the reason why those destructive [Jim Crow] laws came into place, I think can be greatly described by Martin Luther King. What he said about time is, ‘I’m not ready to wait 100 or 200 years for things to change. Actually, I think time itself is neutral. It can either be used destructively or constructively. Human progress never rolls in on wheels of inevitability’.

“It is through human dedication and effort that we move forward. And when we don’t, ,what happens is that time actually becomes an ally to the primitive forces of social stagnation and the guardians of the status quo who are in their oxygen tanks keeping the old order alive. So the time needs to be helped by – every single moment, doingright. The reason why these Jim Crow laws are in place [and] have stifled my rights and   is because we fell asleep. We fall asleep when we’re moving ahead and we all look to the left and right and see that we’re not including people in this move ahead. Because reallyAt the end of the day, we only move forward and it doesn’t cost us. anything. But II’m here today saying that no one and nothing can be great unless it costs you something.

“One out of every five women will be sexually assaulted and raped before she reachesreaches the age of 18. One out of six boys. If you’re a woman of color and you wwere raped before you reach the age of 18, then you are 66% more likely to be sexually assaulted again. 70% of girls who are sex-trafficked are girls of color. They are arecoming out of the foster care system; they are coming out of poverty. It is a billion-ddollar industry. When they go into the sex-trafficking business – and they call it a abusiness, trust me. More than likely they are gang-raped. I am speaking today not just justfor the #MeToos, because I was a #Metoo. But when I raise my hand, I am aware of all the women who are still in silence, the women who are faceless. The women who whodon’t have the money, and don’t have the constitution, and who don’t have the theconfidence, and who don’t have the images in our media that give them a sense of ofself-worth enough to break their silence that’s rooted in the shame of assault. That’sThat’s rooted in the stigma of assault.

“Written on the Statue of Liberty is, *‘Come. Come you tireless, poor, yearning to be breathe free.’ To breathe free.* The quote on the statue reads: Every single day, your yourjob as an American citizen is not just to fight for your rights, it’s to fight for the right rightof every individual that is taking a breath. Whose heart is pumping and breathing oon this earth. Like the originators of the #MeToos, the Fanny Lou Hamers, the Recy RecyTaylors of 1944. She was gang-raped by six white men, and she spoke up! Rosa PParks fought for her rights. She was silenced. To the Tarana Burkes, to the originators, first women to speak out. it cost them something. Nothing and no one can be greatgreat wwithout a cost.

“Listen, I am always introduced as an award-winning actor, but my testimony is one ofpoverty, my testimony of one of being sexually assaulted, and very much seeing achildhood that was robbed from me. And I know that every single day when I think of that, I know that the trauma of those events are still with me today. And that’s what drives me into the voting booth. That’s what allows me to listen to the women who are still in silence. That’s what allows me even to become a citizen on this planet – is the fact that we are here to connect. That we are here as 324 million people living on this earth to know that every day that we breathe and we live, that we have to bring upeveryone with us. I stand in solidarity with all women who raise their hands because I Iknow that it was not easy and my hope for the future – my hope, and I do hope – that we never go back. That it’s not just about clapping your hands and screaming and shouting every time someone says something that sounds good, it’s about keeping it itrolling once you go home.” 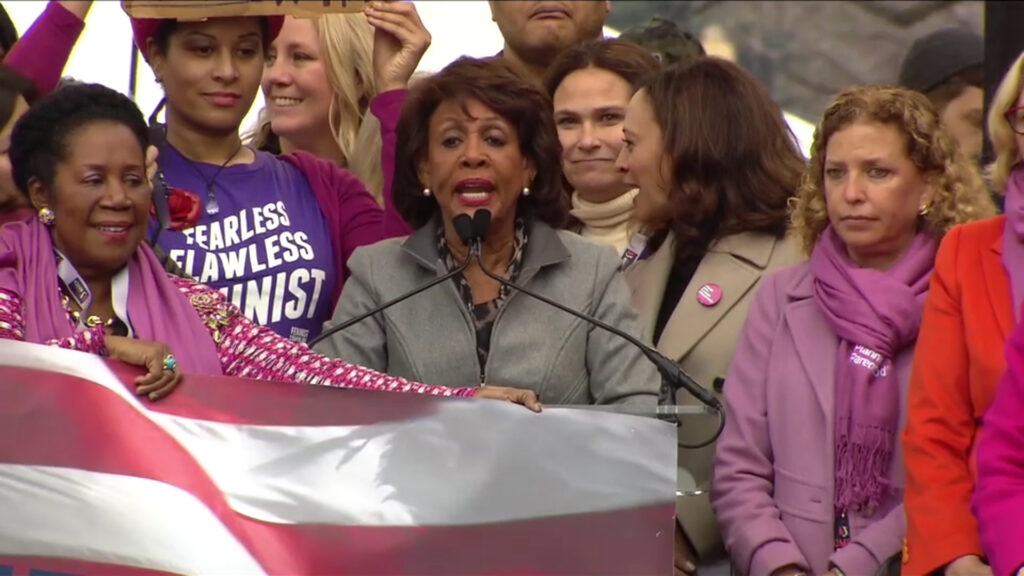 “Anna asked (Anna who?) Donald John Trump, are you disturbed that over 250,000 people – mostly women, led by women – are here in Washington today? And you know knowthat we’re here, rallying and protesting against your presidency. Let me tell you further why we are here: Your words, your actions, have shown us that you don’t, respect us; that both you and all of your nominees for your cabinet posts are dangerous for us and for all our families. I want to talk to you about those nominees and why they aare dangerous. First of all, you have Jeff Sessions. He has a history of racism. He votedvoted against the Violence Against Women Act. He threatened civil rights workersworkers who were just trying to register people to vote. And what about thatBetsy DeVos? A billionaire he’s picking to head education, who’s never seen theinside of a classroom! She has no experience; she has no background, that’sdangerous for our children! And what about that ex-CEO of Exxon? Tell me, something! Oh he’s a big friend of Putin and the Kremlin. And we know that he hid thereports on climate change so that we would not know what Exxon was doing to us andand our families.

“Oh, we know about your nominees Mr. Trump! And then there is Steve Mnuchin, thking predatory lender. He foreclosed on over 36,000 families and he put them out onon the street. Well, Donald. We’re here to tell you that we want you and Bannon tostop sending those dog-whistles to white supremacists. We have a lot that we need totell you today. We’re here because we want equal pay for equal women. And, Donald,in the final analysis, you’d better keep your hands off of Planned Parenthood!

“And so Donald, while we’re concerned, we’re rallying and we’re protesting, you don’t intimidate us. scare us. We’re going to fight against you and your policies. We’re going to struggle; we’re going to do everything necessary tto show you – you cannot take thisthis country down the path that you think you’re going to take it down. We are notnot going to allow you to do it. And so I wanna thank all of you for being here today.today. Are you ready for the fight? Are you up to the fight? Are you gonna continue fight? Thank you all so very much.

“Now you have all of these members of Congress here and all of us work together, so very well. But I’I’d like to introduce you to the Black women of Congress who belong to the Black Caucus. Who are struggling every day for justice and equality. First, our oorganizer Yvette Clarke, that powerful woman from Oakland, Barbra Lee, Gwen Moore, You just heard from Kamala Harris, Lisa Black Rochester, Sheila Jackson Lee, Terri Sewell, Val Demings and Brenda Lawrence. Give them all a big round of applause!”

*The quote on the Statue of Liberty referenced by Viola Davis, reads: “Give me yourtired, your poor, your huddled masses yearning to breathe free.”