In the last issue of Our Time Press, we offered an overview of Senator Velmanette Montgomery’s good works on behalf of  the community. In this issue, we bring you an exclusive Q & A with this powerhouse politician who represents the 18th District.

OTP: What led you to a career in politics?
Senator Montgomery: A natural continuum based on my interest in public policy, my work in organizing, and advocacy around community issues.

OTP: Exactly what does your position entail and what does it mean to your constituents?
VM: My primary responsibility is to represent the interests of the people as their voice in state government, and so whatever the needs of the people are, I feel it is my obligation to try and make sure that what we do in state government and legislature, to some extent, meets those needs and addresses those concerns.

OTP: Talk about your biggest triumphs thus far as a Senator.
VM I think one of the important issues that I have been involved in is around HIV and AIDS prevention. I championed at a time when most people didn’t want to talk about specific ways in which preventative measures should become a part of our health system and the needle- exchange program. The other issue that I continue to champion is the whole idea of expanding school-based health clinic programs, especially in middle school and high school so that they have mental and health care at a place that is most accessible to them. It’s very crucial for our young people. The new  situation for HIV cases is young people, specifically young women. I try to get my colleagues to adopt it as their own issue and to hopefully one day see this as a significant part of our self-care delivery system.
OTP: How does it feel to be in a position to positively affect the lives of the people in your district?
VM: It’s a tremendous responsibility because the needs and expectations of the people that I represent are very great, and much more than I or most of my colleagues are able to deliver in a timely fashion. It requires a struggle year in and year out. When we look for ways to break out of the box and create new and more  appropriate ways of responding to certain issues, it’s difficult because we have less and less capacity to do it because of the tax cuts.

OTP: Have you had to overcome gender barriers in office?
VM: There are gender and social barriers. What I mean by social barriers is that if you are a woman and you do not have a circle of wealth that you are associated with and you are not of a particular interest to certain kinds of political contributions, you have much more of a difficult time. It’s more difficult to think and plan movement in politics from one level to another. It’s difficult to be taken more seriously. In New York State, I have found – when I first entered and now – that the expectation that women and men legislatures have the same path to power and decision- making doesn’t exist. It still is not an automatic assumption and you’re certainly not groomed in that way. There’s not always a support system in the same way that men support each other. I use a restroom analogy: Men have urinals that stand side by side and where they make decisions and come to agreements. Women have stalls that are separated by stalls and doors. So it’s harder to come to an agreement with your sister. 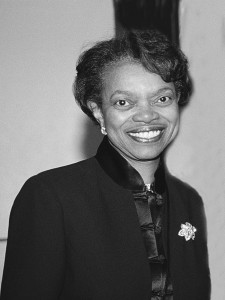 OTP: How do you combat the barriers?
VM: I work very hard. I try to keep up as much as I can with all of the information I have access to on legislation.

OTP: What women do you look up to and draw your strength and support from?
VM: I look to women who use their position to advance their people and to advance issues that they are important. Regent Adaelaide Sandler has been a tremendous inspiration politically in how she frames the issue in a way that’s very clear and that you understand. She takes the time to talk to legislatures and to help us understand what we need to do in order to help our children in the educational system.  A lot of support that I receive on issues comes from women who are not in the legislature but who are out in the community and who want to make a difference.

OTP: How do you balance family with the demands of your position?
VM: It is very difficult and the hardest part of the job because your time is not your own. It’s difficult to plan to go to the theater and vacations because at any given moment, something comes up in your district that’s crucial to your district. But I’ve been very blessed to have a family that has been able to adapt to this kind of irregular life that I have to live. I have one son. His dad has been his primary parent. For him, it was extremely important because he has the security there. It worked out very well for him and me. He’s off in college now and I’m very proud of him. I worked hard and struggled to make sure that I was there as much as possible. The times when I was in Albany and I had to be away from home, his dad was there for him. You have to really work at it.

OTP: What advice do you have for young ladies interested in political careers?
VM: First, the electoral political process is only one aspect of being involved in government and politics. An extremely crucial part is the staff that I rely on to be the technical advisors to do outreach to communities, organizing, and generally giving me support and guidance. There’s also a need for women to look for leadership positions as administrators where they become in control of what happens in communities.

OTP: What’s next for you?
VM: I’m seriously considering a run for borough president. I think it would be a wonderful opportunity for me that I haven’t been able to do here in this position. I think there is a lot of potential for what could happen in Brooklyn.
You can keep up with Senator Velmanette Montgomery by logging onto www.nyssenate18.com.