Why Are NYC Public Schools Still Separate and Unequal? 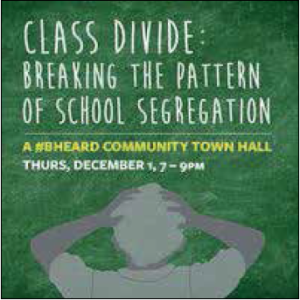 Brian Vines opened the discussion by explaining New York City has wrestled with the racial and economic segregation that exists within K-12 public schools, with some exceptions in the high schools. The NYC Department of Education is years behind in creating a plan to put New York’s racially diverse school-age children together in the same classrooms. What was not brought out was that back in the 70s school busing occurred where pupils of color left their neighborhoods to be taught in Euro-American neighborhoods. This reporter had one charter school management administrator recount his experience of daily fights after school with neighborhood youths who opposed Central Brooklyn teens being taught in their South Brooklyn high school.

Vines asked each panel member to choose between the words “desegregation”, “integration” and “diversity” for what needed to be achieved or was it something else that was at stake.

Nikole Hannah-Jones responded, “The Black kids are the most segregated of New York City’s ethnic and racial groups”. Lazar Treschan noted “72% of the public school population is Black and Latino…the word for me is desegregation in a way that is fair”. Clarence Taylor explained that “New York City has been struggling with the racial composition of classrooms since the 1950s”. Taylor leaned toward the word “integration”– “integration where no one felt superior or inferior to anyone.”

Lurie Daniel-Favors did not select a word, rather she asked, “How to get Black and Brown youth to operate in white spaces?” Daniel-Favors opined, “Race continues to be the determining factor in economic status”. Daniel-Favors seemed more concerned with access to a high quality and useful education over students of color seated in the same rooms with Caucasians. In her words, “[It needs to be a] translation into an education that allows us to transcend our present socioeconomic conditions”. She pointed to “many of her Harvard-educated friends who have no idea how to improve the economics in the Black community”. Later into the panel proceedings, Daniel-Favors contended “New York City lacked a transformative education” and called for “a culturally responsive education”.

Integration is occurring in many neighborhoods but not in the way some policymakers have considered. There is the movement of Caucasian families into Black communities, which impacts public schools’ funding. For example, PS 705 in Crown Heights is in transition from being a predominantly Black and lower-income student body to a Caucasian and higher-income student body. PS 705’s Principal Sandra Beauvoir-Soto explains in a documentary that the school is in transition where, “We are just meeting the eligibility requirements for Title I funding”.

Deputy Chancellor Josh Wallack was finally pulled into the discussion when Brian Vines asked about the progress the Department of Education has made in forming a plan to redress school segregation. Wallack said in a rapid-fire manner, “Policy was in development to improve schools to achieve diversity and school quality, Pre-K for all; AP classes and Algebra taught in all high schools; ensuring public high schools are getting kids ready for college and career”. When pressed by Vines for more specifics Wallack explained, “We’re putting together a plan that explains why diversity is needed and propose new systems. We’re still engaged in discussion and have a long way to go before getting policy concretized and then initiated”.

WNYC’s Yasmeen Khan’s time as the Education Reporter had her recognize that “Parents focus on school quality over diversity. Parents are buying into neighborhoods that are zoned to the elite public schools”. Later in the conversation Khan stressed, “Desegregation or integration could be achieved when policymakers and the public study the school district lines”.

K-8 students’ school choices are relegated to those within a given school district zone. However, high schools are part of a citywide system. Khan champions having middle schools operate within a borough-wide system. It appears Khan sees a transition from the nest (K-5 grade school district zones) to the tree limb (6-8 grade borough-wide options), to a full flight off the tree limb (9-12 grade citywide options).

CM Lander, chair for the Committee on Rules, presented his usual cheery demeanor upon arrival to the panel. Lander pointed to “Park Slope College and the Brooklyn New School as models of multiculturalism”. He stated, “Three years ago, there was no dialogue about segregation and the work required to desegregate the schools. We are farther along due to organizing”. The organizing he referred to was what Lander called “the means to counter tribalism which requires a whole lot of steps at once”.

For Hannah-Jones, the pressing issue was race and racism. “Race and racism need to be dealt with. It doesn’t matter whether you have citywide or district school options. Race is the deciding factor.” Hannah-Jones pointed to the racial and economic oppression that exists for New York’s Black and Brown residents. She went as far as to say, “There’s a need to blow up the system and build it up from the ground in order to offer equitable education”. There were audible sounds of approval by the audience.