Where the Atlantic Yards CBA Stands 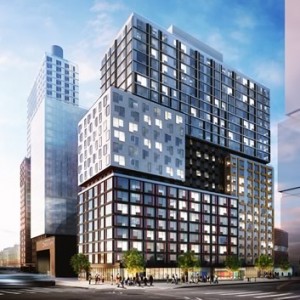 There is dedicated space on the first four lower floors at 664 Pacific Street for a 616-seat middle school. 38 Sixth Avenue is being outfitted with a health center.  This work occurs due to the skill of prime contractors, subcontractors, and their constructions crews.  What do the quarterly reports from the Independent Compliance Officer reveal about the contract awards to minority business enterprises and women business enterprises in pre-construction services and total construction expenditures?  What percentage of all construction workers are minorities and what is the percentage of women hired as construction workers? It took foresight for the crafters of the Atlantic Yards Community Benefits Agreement (CBA) to consider these keys to a win-win situation for the developer and community.

Devotion NYC leader Michael West met with Ms. Cotton, February 18, 2016 to ask these questions.  “Ms. Cotton cited some numbers—1,700 construction workers, 50% are minorities, 10% are women, 20% are Brooklyn residents—but there was no document to support her words.  We asked that she send the document to us by February 29.  Rather than the report, she emailed a letter to him, February 29, 2016 containing the same numbers she had stated in the meeting.”  Mr. West had been associated with BUILD. By 2008, he left the organization “due to other responsibilities and had a job.”

Without the report neither the CBA Executive Committee nor the public can study the many statistics to know the project’s progress in realizing the CBA.  CBA Coalition Chair Delia Hunley-Adossa was contacted by telephone March 1, 2016 in order to obtain the M/WBE and construction workers statistics; however, the voice mail for Brooklyn Endeavor Experience from where Ms. Hunley-Adossa operates was not activated and contacting her via info@beegreennow.org which is listed on the website resulted in the return message: “Remote SMTP server has rejected the address…it does not exist”

What of the Independent Compliance Officer (ICO)?  Who is this person and where are the quarterly reports? According to Michael West and Norman Oder, Atlantic Yards/Pacific Park Report steadfast blogger, no one is in that position.  “Enforcement of the CBA is pretty much dependent on the Independent Compliance Monitor.  [This person] is supposed to report to the community; however, no one has ever been assigned to the position,” explained Mr. West.

According to the CBA agreement:

The ICO shall be responsible for oversight of the Project Developer’s, Arena Developer’s and Coalition members’ obligations under this Agreement, investigation of any complaints brought against the Developers or a Coalition member regarding implementation of this Agreement and review of the Developers reports required under Article X (the “Developer Reports”).  After review of the Developer Reports, the ICM shall provide a report to the Executive Committee and the DBOAC, as defined below, on the status of the implementation of all initiatives.

Mr. West advances Devotion NYC to serve in this capacity. Rather than one person receive an annual salary of up to $100,000, for $149,000 the organization Devotion NYC would perform the same duties.  Another organization he suggests is a multiservice organization called HigherSelf Lifestyle.

The crucial item to examine is the change in the project’s name from Atlantic Yards/FCR to Pacific Park.  Pacific Park is being constructed by Greenland Forest City.  This is a joint venture between Greenland, USA, the developer of record which is a Chinese real estate developer and Forest City Ratner which is responsible for property management.  Greenland, USA controls 70% of the project.  Scott Solish is Greenland’s Director of Design and Development.  Solish left NYC Economic Development Corp. to assume this post.  NYS chapter President of the National Association of Minority Contractors Joseph Coello opines, “Greenland ought to be part of discussions and [learn whether] they are prepared to follow the mandate of the CBA.”

This joint venture initiated changes for the project by the Empire State Development Corp.  “The General Project Plan was modified June 2014 to accelerate construction and the creation of the Atlantic Yards Community Development Corporation (AYCDC) which gives input on development, housing, and community impact.”  One of the 14 board members is Bertha Lewis, Black Institute Executive Director