NY STATE: There was a meeting of disparate minds and temperaments. The new “three men in the room” configuration—African-American Assembly Speaker Carl Heastie, African-American Senate Majority Leader Andrea Stewart-Cousins and Governor Andrew Cuomo, all Democrats who were able to agree on a $175 billion NYS budget by April 1. According to Governor Cuomo, who is monopolizing media coverage of the budget, it is the most progressive budget in the nation. Incremental salary increases for the legislators and the governor was a part of the deal.

Some of the budget highlights like congestion pricing, a revenue enhancement for the Metropolitan Transit Authority; criminal justice reform, ending cash bail for nonviolent misdemeanors and felonies; new commission on campaign financing; a 2% property tax cap; a plastic bag ban; education budget increase to $27.9 billion; and environmental safeguards will attract as many advocates as detractors. Alas, recreational marijuana and its distribution failed to make the budgetary deadline cut. There has got to be some equitable access to “cannabis” business for people of color. In the 10 states where cannabis is legal, few Blacks are engaged as entrepreneurs. The legislative session is not over for a few months.

NYC Reminder: Participatory Budgeting Vote Week NYC is March 30-April 7. It is an opportunity for most NYC residents to identify and cast a vote for funds flowing to their City Council District totaling up to $1 million, which will be included in the 2020 NYC fiscal city budget. Vote online: pbnyc.org/vote or call your Council member.

USA: Congrats to Chicago, Illinois Democratic Mayor-elect Lori Lightfoot, who will be the city’s first Black woman mayor and its first openly gay mayor. A former prosecutor, a political outsider, an avowed progressive who once headed the Chicago Police Board, Lightfoot has a platter full of problems with which to deal: violent crime stats, pension funds, decades-long government corruption, and local police department/ Black community relations.

I first wrote about the former Congressman J.C. Watts, Jr.’s idea, “The Black Television News,” in 2008 during the Obama/McCain presidential campaign season. TBTN was hyped as a Black-owned cable channel which would be devoted to Black people with a Black perspective. The demographics today are 43 million people with $1.2 trillion buying power, or two out of every three minority dollars spent. It was an idea whose time had come. Its gestation period was long. It has been renamed the “Black News Channel,” which will be based at Florida A&M University, with an official November 18 launch date. [Visit: blacknewschannel.com]

Addicted to business pages? You don’t want to miss this April 1 NY Times OP-ED, “The Roots of Black Capitalism,” by Mehrsa Baradaran, were not firmly planted in any federal government investment into sound Black economic reform. Black capitalism began with Nixon’s free market and American private enterprise, the cure-all. That morphed into Reagan’s “enterprise zones,” Clinton’s new markets’ tax credits and Obama’s “prime zones.” Baradaran says those programs failed because “the benefits of capitalism always accrue to the owners of the capital,” who are not Black. Baradaran adds, “Trump’s tax cuts reform of 2017 and the ‘opportunity zones,’ a program which dangles tax cuts to the same class of private equity funds of ‘opportunity’ from other people’s distress…. Using capitalization to fix the racial wealth gap will work only if there is a means to trans capital, assets, wealth or housing.”

The 4/1 NY Times cover story, “Moscow Gains Clout in Africa,” details a new Russian strategy on the Continent designed to bolster its military and political goals, which has been in evidence since 2017. Russia is a major weapons supplier to autocratic African heads of state and to weaker governments. Russia has renewed ties with former USSR friends in Mozambique and Angola. Its military ties with the Central African Republic are disconcerting. Russian clout is ascending while American influence in Africa – humanitarian, military and economic aid – is descending. The Russian presence and interference in Africa is making America reassess its disengagement with Africa. 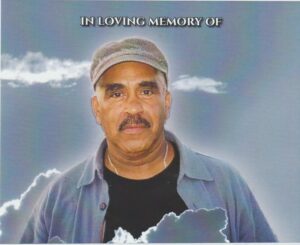 RIP: New Yorker William Francis Gaulman, Jr., 74, died on March 22. Billy joined the US Marine Corps and completed a 13-month tour in Vietnam in 1965. That indelible experience was the subject of his quasi memoir, “DANAAN POSTSCRIPTS,” a poignant page-turner, antiwar book, self-published a few years ago. Back to NY, Billy got married, had children and earned a BS in biology, coincidental with his long and productive career as a NYC fireman, then as a fire marshal. His 40-year love affair with sailing resulted in owning boats, navigating destinations along the Atlantic, the Gulf of Mexico, the Caribbean. William Gaulman is survived by his wife, Saundra, two children, Dara and LeShan, two grandchildren, Jahi-Aamir and Kijani-Ali, his sister Joan, and one stepson, Donnie.