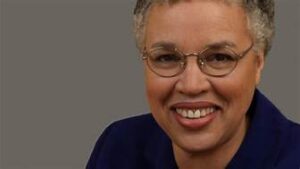 Windy City politics: Two African-American women, Lori Lightfoot and Toni Preckwinkle, meet again in an April 2 runoff to determine who will become Chicago’s next mayor. The women competed in a field of 14 candidates in a nonpartisan race on February 26.    Lori Lightfoot is a career civil servant who has worked in many government offices. She was President of the Chicago Police Board for three years. Toni Preckwinkle was Cook County Board President. She’d like to raise the Chicago minimum wage to $15. Chicago is a tough city to govern. However, the next mayor makes history as the first Black woman to man the office.

The mayor succeeds Rahm Emmanuel, former congressman and Chief of Staff to President Barack Obama.  His reign as Chicago mayor has concluded.

THEATER: Woodie King’s New Federal Theatre, in association with the Castillo Theatre, presents “LOOKING FOR LEROY.” The two-character play is a debate between a young theater intern and a great playwright, ostensibly Leroi Jones and Amiri Baraka, who is working on his final play, “Most Dangerous Man in America: W.E.B. DuBois.” Directed by Petronia Paley and written by Larry Muhammad, the “Looking for Leroy” protagonists are locked in an engaging battle about art, artistic expression and the role of artists of color. The play runs through March 31 at the Castillo Theatre, located at 543 West 42nd Street, Manhattan. [Visit newfederaltheatre.com]

LITERATURE:  Writer/poet Morgan Parker’s new book,“MAGICAL NEGRO,” is a poetry collection which challenges Black stereotypes that was recently published and is getting good reviews. Time magazine says that it is a riveting testimony to everyday Blackness.  A Cave Canem graduate fellow, she is likened to Gwendolyn Brooks. Her 2017 poetry collection, “There Are More Beautiful Things than Beyonce,” uses politics and pop culture to reference 21st century Black women in their myriad complexities. Her debut YA novel, “Who Put This Song On?,” will be published later this year.

HIGHER ED:  Bennett College, the all-women’s college, an HBCU (Historically Black College and University) in Greensboro, NC, which faced loss of accreditation a few weeks ago if it failed to raise $5 million, has donations that topped $8.2 million by deadline.

RIP: Beloved family patriarch Donald Herbert Eaton, Jr., 85, died on February 23. A Korean War Veteran and a 369th Harlem Hellfighter, he was a father and grandfather. Geoffrey Eaton, Congressman Charles Rangel’s former Chief of Staff, is one of Eaton’s sons. The Eaton family plans a Harlem Military Homegoing Celebration for him, which begins with a wake/viewing at Benta’s Funeral Home at 630 St. Nicholas Avenue, Harlem, on March 8, 4-8 pm. A military funeral will be held at the Salem United Methodist Church, located at 2190 Seventh Avenue, Harlem, on March 9 at 11am.

The 6th Annual Harlem Haberdashery 2019 Masquerade Benefit Ball, “A Night in Harlem Glamour,” will be presented by the Harlem Haberdashery Boutique with its 5001 Flavors for the Boys and Girls Club of Harlem on March 9 at the Riverside Church from 7-11 pm.   Moreover, the masquerade ball will honor Harlem prominences like fashionista extraordinaire Audrey Smaltz, the Ground Crew, a NY Fashion Week staple; Terrell Stowers, Marching Cobras; and Jamel Wright, Harlem Jets Football. For more info about the glamour, bling and Harlem Renaissance patina, visit harlemhaberdashery.com. Ball,   A Night of Harlem Glamour like no other, will be presented by Harlem Haberdashery Boutique, and  its ny,  5001 Flavors, which will  be housed at The Riverside Church, 490 Riverside Drive

Tamron Hall, 48, recently disclosed that she has it all.  She is married to a man named Steve, is 32 weeks pregnant and ready to go before the cameras for a new daytime TV talk show for Disney, which premieres in national syndication on September 9, 2019.  She will serve as the show’s executive producer along with veteran producer Bill Geddie, who was executive producer of ABC-TV’s “The View.” What a life!

The June Kelly Gallery, a member of the Art Dealers Association of America, mounts the exhibit, “ELIZABETH CATLETT: An Ardent Feminist, Sculpture and Prints,” which opens on March 8 with a reception and runs through April 16 at 166 Mercer Street, SoHo, Manhattan (212.226.1660).

The Billie Holiday Theatre presents, “50 IN 50: Letters to Our Daughters,” a seminal monologue showcase of 50 stories by many women from around the world of the African Diaspora, which will be read by theater, film and TV eminences like LaChanze, Paulette Washington, Jasmine Cephas Jones, Phyllis Stickney and others. The Billie Holiday Showcase premieres on March 9 at the Kumble Theatre, Long Island University, Brooklyn, and it will debut a week later at the WACO Theatre Center in Los Angeles. [Visit thebillieholiday.org]

A Harlem-based brand consultant, Victoria can be reached at Victoria.horsford@gmail.com.