OPINION: I no longer listen to the TV political pundits babbling from dusk to dawn about midterm outcomes after their miserable performance and forecasting in 2018. We all know more than is necessary about POTUS 45 and his base, whose numbers are about 30%. How will Americans vote on November 6 is anyone’s guess? These midterms are highly important if there is any hope of saving the Republic of the United States of America. Start by getting out to vote.   New Yorkers should have info about their polling sites.   It is important to monitor actions in other states as well.

Voter purges are useful tools and weapons for GOP-dominated states which have sizeable populations of color. Since the US Supreme Court took the muscle out of the Voting Rights Act, the South is working assiduously to purge voters. Georgia and the gubernatorial race is a case in point. There has been a surge in voter registration in Georgia this year. Brian Kemp, the Georgia Secretary of State, is running for Governor opposite a Black woman, Stacey Abrams. He has invalidated lots of write-in votes, tilting the scales in his favor.  A number of civil rights groups are urging Kemp to vacate his office until after Election Day. The GOP must not be allowed to steal any more American elections from Black people.    Other tactics employed in the American South, vis-à-vis elections, is closing polling places in predominantly Black, Latino and Asian-American neighborhoods.  Abrams is “destiny’s child” and history-maker. When she wins next month, she becomes the first Black woman governor in America’s 50 states.   Send money to her campaign and help petition legal eagles to remove Kemp from his Secretary of State chores.

We must continue to financially support the gubernatorial candidacies of Ben Jealous in Maryland and Tallahassee Mayor Andrew Gillum in Florida. November 6 will determine if the widespread American anger expresses itself at the polls….and that America is more blue/purple than it is red/autocracy.

NYC Public Advocate Letitia James seems destined to become New York’s first African-American and woman to be the state’s top lawyer. Her Republican opponent, Keith Wofford, 49, a Harvard Law School alum, pro-Trumpian, made $4+ million last year at Ropes and Gray, a law firm.   He is the first Black to get the GOP nomination for Attorney General.

The City University of New York established a new school, the School of Labor and Urban Studies, dedicated to public service and social justice. It will be the nation’s only college program committed to the interdisciplinary study of work and workers in the urban environment.   Learn more about the school, its Labor Studies and Urban Studies programs at an open house on November 15 at 6 pm at 25 West 43rd Street, Manhattan.   [Call 212.827.0200]

Read the Essence.com essay about Harlem-based mom/wife/entrepreneur Alyah Horsford-Sidberry titled “She Built a Thriving Lounge in the Center of Harlem’s Food Scene.”

The Apollo Theater presents, “SAY IT LOUD, I’M BLACK AND I’M PROUD at 50!”, a concert celebration of James Brown’s music and the Black pride it instilled and inspired among artists like the Temptations, Sly & the Family Stone and countless others since the summer of 1968. Concert is set for October 20 at 8 pm at the Apollo with Christian McBride as the musical director and Nona Hendryx as a special guest. [Visit Apollotheater.org] 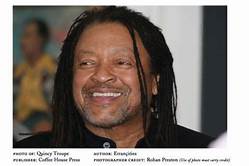 Margaret Troupe’s Harlem Arts Salon (HAS) hosts a special event coincidental with the publication of a new edition of the Quincy Troupe book, “MILES AND ME,” which includes a foreword by Rudy Langlais, producer of the soon-to-be-released motion picture, “MILES AND ME.” The book documents Quincy’s friendship with the acclaimed music virtuoso Miles Davis and his own awakening, artistic and personal. The “MILES AND ME” festivities on October 28, from 2-6 pm, begins with a special conversation with Quincy Troupe, moderated by Hakim Hasan followed by musical performances by Will Calhoun and Keyon Harrold.    Housed at 1925 Seventh Avenue, Suite 7L, between 116-117th Streets in Harlem. The HAS party offers food, wine and a copy of the book. Reservations necessary. [Visit harlemartssalone.com or call 212.749.7771]    Proceeds benefit the Gloster Arts Project.

Silicon Harlem hosts its 5th Annual Next Generation Tech Conference, themed “RETHINK EVERYTHING,” on October 26 at the National Black Theatre, located at 2031-33 Fifth Avenue in Harlem from 8am to 5pm. Some of the conference agenda items include Artificial Intelligence, Internet of Things, Blockchain and Virtual Experiences. Registration necessary. [Visit      Siliconharlem.net]