The prestigious Nobel Peace Prize was awarded last week to Iraqi Nadia Murad, 25, and to Congolese Dr. Denis Mukwege, MD, 63, two soldiers in the front line of battle against sex abuse of women. A few days later, the US Senate confirmed Judge Brett Kavanaugh, an individual with clouds over his character, to the US Supreme Court.

Kavanaugh, it is alleged, has a history of sex assault. Despite Professor Christine Blasey Ford’s compelling testimony about a traumatic teen encounter with Kavanaugh before the Senate Judiciary Committee, the senators were tone-deaf and voted consistent with the will of Senate Majority Leader McConnell and POTUS 45, who wants to staff the court with conservatives. Professor Ford was later demonized by Trump, who suggested that she was guilty of falsehoods.    The GOP has won the SCOTUS war for now.  Will that Senate vote have midterm consequences next month? How will American women process the Kavanaugh confirmation.   Remember Anita Hill at the Clarence Thomas SCOTUS hearings. Thomas was confirmed. Hill influenced women voters to start sending more women to the US Senate. By 1995, their Senate members included Diane Feinstein, Barbara Boxer, Carol Moseley Braun and Olympia Snow   Today, 23 of the 100 US Senators are women.

The Trump GOP base is energized. The Democrats, progressives, independents, women and millennials are also energized, bolstered by the outcome of the Supreme Court circus to which we were subjected last week.   The November elections will be revelatory.   Impeachment of a Supreme Court judge is a possibility. Americans have a long list of Trump-era grievances, draconian immigration policy which separates parents from their children at the US southern border, gun violence, Obamacare withdrawal, white nationalism, the US criminal justice system, the tax cuts and climate change.   The November elections are less than a month away.   America’s anger and division are palpable. Now to get out the vote!

US Senate and former Secretary of Agriculture Mike Espy, Mississippi.

State races: Deputy Chair of the Democratic National Committee and Minnesota Congressman Keith Ellison is running for state Attorney General……. African-American Lori Lightfoot has tossed her hat into the Chicago mayoral ring since Rahm Emmanuel has announced that he will not run for reelection.

NB: You don’t have to reside in a state to support candidates listed above. Money has been key to GOP victories nationwide!! The time is now for African-Americans to influence the US electoral map.   Midterm elections are imperative. The Republicans and the US Supreme Court have taken the muscle out of the hard-fought-for Voting Rights Act. Further erosion of rights for people of color are forthcoming in statehouses if we do not alter the course of local and national GOP dominance.

Read about Fortune magazine’s “The 50 Most Powerful Women list in the USA.” Three African-American women made the list, well sorta/kinda. They are Ann Marie Campbell, EVP, Home Depot, #16 and Roz Brewer, COO/Group President/Board Trustee, Starbucks, #33. Oprah Winfrey is the bonus pick #51. She was a staple on the list until 2012. In 2015, she invested in Weight Watchers and became its unofficial spokesperson. Its stock jumped from $6.79 to $103 today.

The Harlem Business Alliance hosts another event under the umbrella of its “Disrupt Harlem Innovation Series: Black Economic Empowerment Breakfast,” including an “insightful discussion with Shawn D. Rochester, author of “THE BLACK TAX, The Cost of Being Black in America,” on October 17, 8:30 am to 10 am at Mist Harlem, located at 46 West 116th Street.   [Visit HBANY.ORG to register] #BLACKTAXED

The Terrie Williams Agency opened in 1988 and has been known as the premiere Black-owned public relations firm in the nation is closing. Terrie is retiring to focus on personal wellness, travel and the next chapter of her extraordinary life.  Author of four successful books, including “Black Pain,” a primer about Black America and depression–her memoir must be a “work in progress.”

This is a year for American cultural and historical centennial celebrations. 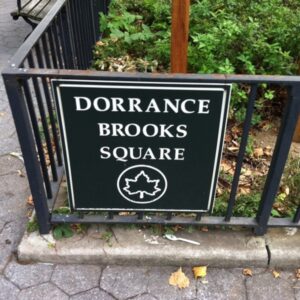 2) This year is the centennial of the WWI Armistice dated 11/11/18. The 369th Regiment composed of Black American men, aka Hellfighters who were assigned to fight with the French during WWI and who fought with distinction. The Dorrance Brooks Property Owners and Residents Association observes the WWI Armistice at Dorrance Brooks Square Park, Edgecombe and St. Nicholas Avenues at 136-137th Streets, Harlem on November 11 at? am.  A 369th Hellfighter, Dorrance Brooks, fought and died in France, a few days before the Armistice was signed. [Call 646.820.1476]

BOOK/EXHIBITION: “Gordon Parks: The New Tide Early Work 1940-1950” is a book and traveling exhibition which is a co-venture of the National Gallery of Art in Washington, the Gordon Parks Foundation and Steidl, the book publisher.   The exhibition is on view at the National Gallery of Art on November 4 to February 18.   Debra Willis is one of the exhibition catalogue co-authors. Debra Willis is a university professor and Chair of the Department of Photography and Imaging at the Tisch School of the Arts at NYU. She is also the Director of the Institute of African-American Affairs Center for Black Visual Culture at NYU.

A Harlem-based management consultant, Victoria is reachable at Victoria.horsford@gmail.com.