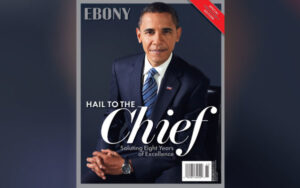 Last weekend was the last one for normalcy in America, especially with regard to the White House and the media.   Last weekend was President Barack Obama’s last one in the White House.  Last Sunday, the NY Times published six Obama stories, all required reading for students of American history. The story titles are 1)“Jolted by Deaths, Obama Found His Voice On Race” ; 2)“No Racial Barriers Left To Break (Except All of Them)” by Khalil Gibran Muhammad; 3)“What It Was Like To Fight His Agenda” by former Congressman Eric Cantor; 4)“How Black America Saw Him” by Michael Eric Dyson; 5)“Eight Was Enough” by Peter Wehner; and 6)“Barack and Michelle Find A Place of Honor On The Wall”. The CBS-TV “60 Minutes” show did just that with POTUS on 1/15. The Ebony magazine special issue, “HAIL TO THE CHIEF: Saluting Eight Years of Excellence”, is available at newsstands and online, and is must-read Obama library material.

Americans cautiously watch the Trump Presidency unfold. A “Women’s March On Washington”, an anti-Trump protest, will dominate headlines this weekend following Trump’s inauguration. During the Martin Luther King Holiday Weekend, the President-elect was engaged in a “war of words” with civil rights icon and Congressman John Lewis. Ouch!!   Lewis will not attend the 1/20 Trump inauguration. We learned about the demise of the Ringling Brothers Barnum & Bailey Circus coming this May after a 146-year run. Hope that it does not reincarnate at 1600 Pennsylvania Avenue, NW. I continue to pray that Providence continues to Bless America in ways large and small!

Members of the Black Lives Matter Movement were among demonstrators at Trump Tower on Fifth Avenue at 56th Street who wanted an audience with him(Trump) about African-American rights. Black Lives Matter spokespersons said that they would be totally immersed in NYC politics and its members will run for 5 of the 51 NYC Council seats this year.

NY Governor Andrew Cuomo nominated African-American lawyer Rowan Wilson to the NY Court of Appeals, the state’s highest court. If confirmed by the NYS Senate, African-Americans would represent two out of a seven-member court, a first! A Harvard Law School grad, attorney Wilson is a partner at Cravath, Swaine and Moore, one of the nation’s most prestigious law firms, which was founded in 1819.

The Congressional Black Caucus Foundation announced “study abroad” opportunities in Japan and China this year for African-American students who live in or attend a college in a CBC member’s district.  The Japan trip is scheduled during Spring Break, March 12-24. Application deadline is January 23. …..The China trip is June 1-18; application deadline is 2/26. The China trip targets African-American STEM, business and international affairs majors who live in a Black Congressperson’s district. [Visit cbcfinc.academicworks.com]

The Morehouse College Board of Directors will not renew the contract of President Dr. John Wilson, who was hired in 2012. A Morehouse alum who earned graduate degrees at Harvard, Dr. Wilson helped raise close to $3 billion for capital programs at MIT. Wilson was a member of the White House HBCU Initiative. It seems that Morehouse alum were not pleased with his performance.

Playwright extraordinaire August Wilson is very much in vogue. His Pulitzer-winning play FENCES, now a movie starring Denzel Washington and Viola Davis, is the subject of lots of Oscar buzz. Wilson’s JITNEY, the only one of his 10 plays about Blacks in 20th century America which never played on Broadway, opens in a Manhattan Theatre Club production on the Great White Way on January 13. Directed by award-winning actor-director Ruben Santiago-Hudson, JITNEY is a story set in the 70s about a group of men who earn a living driving unlicensed cabs known as jitneys.

The Complexions Contemporary Ballet Company begins its 23rd season on January 24th at the Joyce Theater in Manhattan. The ambitious two-week program will reprise many signature Complexion works and will feature two new programs which employs music genres from Bach and Handel to rock legend David Bowie. The new season ushers in “The Collage Series”, which extends the visual format into dance form. Co-founded by African-American dance masters Dwight Rhoden and Desmond Richardson, who are also the company’s co-artistic directors, Complexions is a multicultural ballet company which “reinvents dance through an admixture of methods, styles and culture”.

The first lady of the flute Bobbi Humphrey, who recorded Billboard chart-topper “Harlem River Drive”, returns with her band to perform at Ginny’s Supper Club in the Red Rooster, located at 310 Malcolm X Boulevard, on Saturday, January 21 at 9:30 pm. Composer/writer Humphrey has her own record label called Paradise Sounds Records. [Call 212.421.3821]

A Harlem-based business consultant, Victoria Horsford can be reached at victoria.horsford@gmail.com.