We Are Inspo: Reintroducing Collective Work and Responsibility to a New Generation

A Mechanical Engineer, a Fashion Designer and a Comedian walk into an event space. 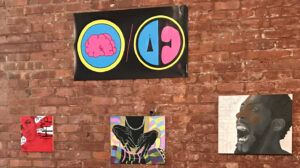 That isn’t the start of some campy joke; instead, it just may be the start of a new model of entrepreneurship. On Saturday, July 22nd We Are Inspo presented the Inspo Expo at Sanders Studio NYC in Clinton Hill. Over 250 guests came to experience an amalgam of creative expression. Patrons got to experience the latest 3-D printing technology and a fashion show introducing a new clothing line. There was an interactive photo booth, a full-art installation and a comedian, all while a publicist was broadcasting live on her own podcast. A graphic artist showcased his T-shirt and hat collection, and a local musician premiered his new tracks, all while the Inspo Profile Video introduced the crowd to the people who moved this idea into action. And while the execution and the intentional variety of this event might lead one to assume that the organizers were all seasoned veterans of their particular industries, that assumption would be completely wrong. Not only are they not industry vets, but not one of them are even older than 22.

Keith Taylor is a 21-year-old from Crown Heights, Brooklyn. He is a junior at Drexel University in Philadelphia, majoring in Mechanical Engineering with a minor in Product Design. He is also the founder of We Are Inspo. Inspo is short for Inspiration. We Are Inspo is a collective. Keith explains the idea: “I find that my inspiration comes from being around like-minded individuals, people who are traveling on similar paths. We Are Inspo is a collective of friends that support one another’s individual endeavors and entrepreneurial ideas.”

Every member of We Are Inspo is either a recent college graduate or will be in the next year. Sade Lewis and Shaniya Charles are co-founders of the fashion line Sade/Shaniya. Jai Bailey is an illustrator, visual artist and the founder of a brand called Difi, which is short for Disfictional Art. Kaleb Stewart is a comedian and screenwriter. Shenell Renwick is a publicist and the host of her own podcast, titled “Rookie Season”. Together, they launched We Are Inspo to collectively support each other’s budding brands. In this age of social media, kids Keith’s age have 10,000 IG followers just for posting duck-faced selfies all day. As Keith put it, “We Are Inspo provides a platform for our work collectively, using our combined influence to breathe life into our individual ideas”. He explained that he got the idea for the collective over a year ago, but spending a semester in Hong Kong motivated him to speak the idea into existence. “It was something I was thinking about for a while. I had ideas about it last year, but it wasn’t until I came back from abroad that I felt really inspired to do it. So I invited my friends over to the house. We talked and people understood what I was thinking and we made it happen.”

The group worked together on every aspect of the launch of the Inspo Expo. From marketing and promotion, to event logistics and securing a venue, every person played a role in making the launch a success. They used Facebook and Instagram for the bulk of their promotions, and Shenell utilized her skills as a publicist to create brand relationships. They captured the attention of their audience in the exact place that their audience goes for information. And the outcome was amazing. 250 RSVP’s the first time out for a group that has never done an event before, individually or collectively. That accomplishment speaks not just to their work, but also to a generation that sees entrepreneurship and ownership not just as a dream or a wish, but as a natural extension of the education process.

Millennials are the largest generation in Western history. They are becoming the most educated generation in Western history. And they are civic-oriented global citizens. We Are Inspo is a prime example of Millennials taking the idea of business development into their own hands. The idea of collective work and responsibility isn’t a new concept, but Keith hopes to explore the potential and the possibilities of working in tandem without the limits of industry or occupation. The collective will continue to produce Inspo Expos, and there will be no limits on participation. All ages and industries are welcome to be a part of the connectivity he hopes to build. For Keith and the members of We Are Inspo, the sky is not the limit, it’s just another step in the right direction.