Vote for the Future Democratic Primary Tuesday, September 10, 2013 Vote for what matters, Vote for who cares! 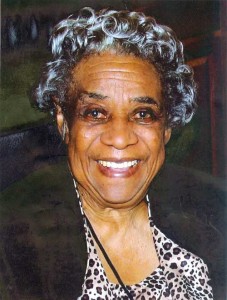 Your vote celebrates the lives of pioneers and strivers who came before us, who loved and empowered us, and filled our world with vision, wisdom and joy.

…Godmother of Central Brooklyn Jazz; grand lady of community activism; tireless warrior for aging populations; in the pantheon of great women visionaries who placed Bedford-Stuyvesant on the global map … departed this life on August 29, 2013.

The Celebration and Memorium

The sun rose on December 16, 1925 when Alma was born to Macon and Gertrude Roseboro in Asheville, North Carolina.  Raised in Harlem, New York, Alma began community organizing at an early age by marching with Adam Clayton Powell Jr., while attending Sunday School at Abyssinian Baptist Church.

Alma later moved to Brooklyn where she resided for over 55 years.    During those years Alma would continue her civic activism by founding the Pulaski/Nostrand Block Association and the Jazzpazazz Preservation Society. Alma has served as President of the Bedford Stuyvesant Interagency Council of the Aging, The Bedford Stuyvesant Beautification Association, The Magnolia Tree Earth Center, the Tompkins Park Recreational Cultural Association and the 79th Precinct Council.

Alma was also  a producer who started out producing local shows at P.S. 54 headlining the then unknown Persuasions and later becoming a  founding member of the Central Brooklyn Jazz Consortium, which has been “keeping our music alive” since 1999.

In between all of her civic endeavors, Alma was a dedicated involved mother.  If her children were involved, so was she.  From being a scout leader to running a summer camp, there was nothing that she wouldn’t do for her children. And there were a lot of children, she was always adopting —  just one more sister or brother for her two bio children.  There are so many that we lost count many years ago.

Of course there were her other true loves, Joe Carroll and Jazz.  Together they founded the Jazzpazazz Preservation Society to give tribute to the Jazz greats of yesteryear.  Over the years many were honored at their annual Billie Holiday Jazz festival such as, Ms. Etta Jones, Mr. Houston Person, Ms. Betty Carter and Ms. Flo Kennedy.  Jazzpazazz also spawned the annual Sagittarius Ball that celebrated the birthdays of Alma Carroll, Joe Carroll, Etta Jones, Scoby Stroman, Kitty Chavis and all Sagittarians.

Alma has received honors, tributes and acknowledgements, to numerous to list individually, from every notable office, agency and politician in New York.  From the Governor of New York State, for her work with the Office of the Aging, to local dignitaries for her tireless efforts to empower seniors, youth and family and  while preserving the rich history  of her beloved Central  Brooklyn.

The sun set on Alma on August 29, 2013 and we know she is already organizing, promoting, producing and working to improve her new community.

And be called Thy children, and to dedicate our lives to the service that extends through willing hearts and hands to the betterment of all mankind. We send a cry of Thanksgiving for people of all races, creeds, classes, and colors the world over, and pray that through the instrumentality of our lives the spirit of peace, joy, fellowship, and brotherhood shall circle the world. We know that this world is filled with discordant notes, but help us, Father, to so unite our efforts that we may all join in one harmonious symphony for peace and brotherhood, justice, and equality of opportunity for all men. The tasks performed today with forgiveness for all our errors, we dedicate, dear Lord, to Thee. Grant us strength and courage and faith and humility sufficient for the tasks assigned to us. (Mary McLeod Bethune)

People are unreasonable, illogical and self centered.  Love them anyway!

If you do good, people will accuse of selfish ulterior motives. Do good anyway!

If you are successful, you will win false fiends and true enemies. Succeed anyway!

The good you do today will be forgotten tomorrow.  Do good anyway!

Honesty and frankness makes you vulnerable.  Be honest and frank anyway! Fight for some underdogs anyway!

What you spend years building may be destroyed overnight.  Build anyway!

People really need help but may attack you if you help them.  Help people anyway!