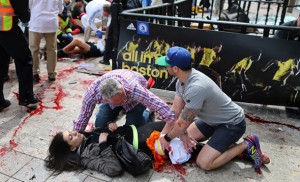 We were making a purchase at a corner store where the television was showing reports of the horrific bombing in Boston, and to my comment of how terrible it was, the owner, a Muslim from one of the Arab states, agreed, saying yes it was terrible. But I also heard a sad tone of “I hope it wasn’t one of us.”

And it’s a feeling African-Americans are particularly attuned to, hoping that it wasn’t one of “us” letting the race down. It is a feeling that must be in people of many nationalities as the hunt for the perpetrator or perpetrators continues, of hoping not to become the target of fingers waiting for something to point at. It would be like winning the lottery in Shirley Clarke’s short story, and being publicly stoned by media and people who call themselves patriots.

But we don’t hear anyone saying they hope it wasn’t a man who did it. There is no thought given to gender responsibility and that’s too bad. Because all of the perpetrators we’ve seen of these heinous acts have been men.

If there were a visceral gender shame and sense of responsibility, then you’d have to ask why men, in this day and age, are allowed in discussions involving the toys of war and terror, the assault rifles or drone attacks that leave civilians in other countries with the same sense of horror and anger that we share over the Boston bombings.

Discussions with those possible outcomes should be left to women who are answerable to a women’s council. Let the men play with the other stuff, infrastructure repair and renewable energy. Sort of do the work around the house and let the women talk between nations. (Also, handle the finances. A few more senators like Elizabeth Warren tanning the hides of the financial regulators and banks would put them on the right track.)

In this age, when an Apple iPad 2 is reported to be as fast as the Cray-2 vector supercomputer out of Cray Research from the 1980’s (to those of us of a certain age, that’s really something), then I think you move beyond the capacity for men, with their gender-specific propensity for violence, to use the information safely and not to make smarter bombs, buy more guns and learn new ways to take something from the other guy.

But the age of conquest is over. Now has to be the time for learning to live together as a family on our home planet. This is why women should run the world. The technology has brought us to the point where the female’s ability to process information (in a way that leads to relationship building rather than violence), makes them more suited to deal with the dangers we’re facing now.
But there’s no turning back the clock on the carnage in Boston. We now live in a world where instead of young men dying on front lines, there are civilian women, children and men being left shredded, maimed and dying, caused not just by drones overseas, but by some angry person or persons unknown close to home. Until that unknown is caught and even beyond, we will have to accept the reality that truly anything is possible and go about our lives trying to make them meaningful and working to change for the better, the things we can.