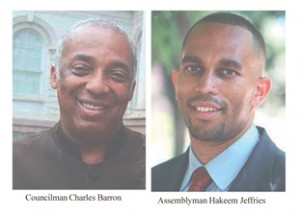 For African-Americans, the contest in the 8th Congressional District Democratic Primary between City Councilman Charles Barron and Assemblyman Hakeem Jeffries, is a classic choice between two paths to the common destination of a sovereignty over ourselves and our culture and equality in the institutions of society.

We haver known Councilman Barron over the years and we know he will give a full-throated expression of the concerns of the bottom 99% in general and African-Americans in particular. He will express views on foreign policy, defense spending and speak about the nature of true homeland security that will challenge the congress and the Black and Progressive caucuses.

He will also be a lightning rod for the Republicans, with each Democrat being asked to take a position on every outside-the-mainstream statement the councilman has ever made.

In that environment, we don’t know how much legislation will get done or how much flexibility there will be on votes that have to be traded in order to bring resources to the district or move political initiatives.

When Assemblyman Hakeem Jeffries first ran for office, we thought him as just an ambitious corporate lawyer. However, over the years he has continually impressed with his stand on issues and his ability to move legislation such as prison gerrymandering and penalties for marijuana possession that directly affect millions of people across the city. We have no doubt that in Congress, Jeffries will continue to prove himself to be an effective legislator and also a member of the Black and Progressive caucuses.

One of the things that Barron has going for him and that is continuing to grow, is the perception of him being on the side of the disenfranchised and those not mentioned in the polite political commentaries on Sunday mornings, and that he is facing a united mainstream establishment and vein-throbbing editorials vehemently decrying his candidacy and all but declaring that all hell will truly break loose if he is elected.

The reason this is attractive, is because if you were one of the poor or one of those about to be pushed off the ledge of a precarious middleclass by a job loss, a medical condition, or some damn fool mayor who says he’s going to take away your daycare and out-of-school programs, the mainstays around which your life revolves and that make everything else possible, when just the thought of it jolts you awake at four in the morning, if you were that person and all of the power centers in the city couldn’t provide safe shelter and learning for your child so you can go to work, but they can agree that Barron must never be in congress, then that might make you decide that “the enemy of my enemy is my friend” and gleefully poke a thumb in the eye of the establishment. And if you are joined by elements of the Occupy Movement, then the race would get even more interesting.

The paradox of this, is that while the councilman would give full voice to the frustrations and pain of the least among us, it is Jeffries, with his proven ability to work with legislative partners on progressive agendas, who could move legislation that directly affected and improved the lives of those same individuals.
It is in international affairs that Barron gets in the most trouble, primarily in the Middle East. He has said that the State of Israel has a right to exist, but he does not believe it should continue to grow settlements and oppress and destroy the lives of millions of Palestinians in a struggle that has occupied the front pages for the last 60 years and shows no sign of ending. He says it’s time to change that.
While speaking this kind of truth to power invigorating, it is only welcomed in Washington by Tea Party Conservatives spoiling for a fight, right-wing pundits rushing to press with their stupid Their Coming to Take America! books and predatory fundraisers waiting to send out apoplectic e-mails raising cash from frightened “patriots”. It also is not helpful in forming the relationships necessary to move agendas of direct concern to African-Americans in the district.

The councilman is right when he says it was the Movement of committed people, not the politicians, that forced the enactment of the Civil and Voting Rights Acts. A million people marching across the Brooklyn Bridge would give whoever’s in office the opportunity and leverage he or she needs to become a great legislator on behalf of the masses.

The people are going to have to make the call on this election and they certainly will get the congressperson they come out and vote for. The political machines and endorsers on both sides will be fully-engaged to get all of their trusted and loyal voters to the polls. This is a traditionally low-turnout election and in the end, it will hinge on who comes out more: Those passionately for the candidates and those passionately against them. Whichever you are, your vote June 26 will make the difference. David Mark Greaves