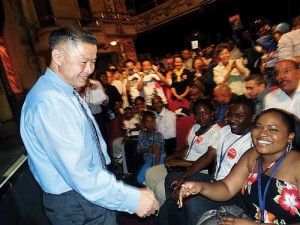 Eighty-nine (89%) of  eligible voters did not vote in the last mayoral primary.  This bit of knowledge is what is driving all of the Political Action Committees (PACs) and election advisors.   Their equations are based upon the 11% of “likely voters”, and if they can sway them, they’re good.   That is why hedge funds back charter school-friendly candidates and real estate interests back candidates who understand their needs.  That is why endorsements are important.  Because the turnout is so low, 20 endorsements generating a few thousand votes can determine an election.   But if the 89% had a reason to come out, everything changes.

There are 4 candidates in the race who will divide the 11% of the eligible voters who voted in the last mayoral primary.  There’s Christine Quinn, the City Council Speaker and Bloomberg surrogate who deserves payback for that and this is a perfect opportunity.   There’s Bill Thompson, who could not compel 89% of the eligible voters to come out for him in the last primary, and he’s done nothing in the intervening four years to make the case for them to come out now.  We have Bill de Blasio and his tale of “two cities approach” which is a co-option of elements of John Liu’s People’s Budget. De Blasio’s universal pre-K, paid for by taxing the wealthy, is only one element of the People’s Budget, which includes an array of revenue-generating proposals necessary to fund the educational and employment aspirations of the 89%.  And if other campaigns answer with a series of “Me to(s)”, then it’s best to go with the original, not the would-be copycat.   As for Anthony “I-have-no-shame” Weiner, we know he’s still in the race, but that doesn’t mean we have to care.

Everything has its time.   During the Bloomberg years, developers and real estate interests had their time and we see the amount of new construction they’ve been able to achieve as they’ve remade the city skyline.  But we also see the financial pain in communities of color,  we see a failed school system that reels from one experiment to the next, taking young people who start out as the best and brightest, and extinguishes their spark as they advance in school years.  We see the draconian policing tactics and the fancy consultants overpaid with tax dollars.

Because Bloomberg thinks fingerprinting everyone in public housing is a good idea, then everyone in public housing eligible to vote in the Democratic Primary on Tuesday, September 10, should come out and vote for the candidate billionaire Mayor Bloomberg can’t stand, John Liu.  If public housing residents did that, it would tell Bloomberg what he could do with his proposal, and no politician would ever again allow words like that to leave their lips.   Also, John Liu would win the election and the human priorities of the city would begin to take a guiding precedent.

Despite his wealth and power, Michael Bloomberg has only one vote.  The same as the housing tenant.  And the tens of thousands of tenants who did not vote in the last primary, each should take their one vote and put it down on the candidate whose name Bloomberg, Wall Street and real estate speculators want forgotten, John Liu.

Many of the 11% who are guaranteed to come out, vote because it’s the right thing to do, and because it is so important, they feel it better to vote for not the worst candidate, rather than risk “wasting” their vote on someone who, in the opinion of pollsters, has no chance of winning.  Another part of the 11% look at politics as an inside game to be played with interested parties able to get out the troops, their portion of the 11%.  These core voters will all come out and make their votes count.

But for the other folks, the 89% who were not inspired to come out and vote in the last primary, this is their chance to cast a meaningful vote.  This is the time to bring collective power to bear and strike like a Black Belt, hitting at a uniquely vulnerable point for the establishment, the Democratic Primary.  Use social media for social action.  Tweet, Facebook and share that voting for John Liu is the only way to go.  Do that and then go watch your vote explode across the screens primary night and see the world change right before your eyes.

On a last note, as we go to press we see that the ugliest kind of campaign literature is being mailed to residents of Council District 36 by Jobs For New York, seemingly on behalf of one candidate while viciously attacking the others.  This Real Estate Board of New York-funded mailing is nothing but an effort by white males to suppress the black vote.  They want to engender negative feelings about all politicians and the process.  The fewer votes the black community casts, the better it is for their candidates in the mayoral race.   The community has an opportunity to tell them that game is old and known by patiently waiting only three weeks  on Tuesday, September 10th. Deal with them decisively by voting for John Liu for Mayor.

(Correction on the Web site for the Election District interactive map.
http://nyc.precinctsreporting.com)