Bad Times and Hard Work to Be Done 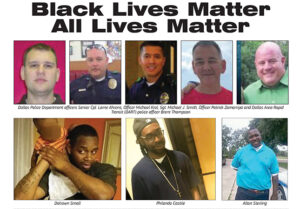 Okay, we know we’re better than this as a nation and we have to hold firm to that thought as we work our way through these increasingly difficult times.

Sniper Micah Johnson was a man who snapped.   He was known to be unstable, and what led him to commit the horrifying and irrational killing of 5 police officers and wounding of 6 more because they were white was that festering instability combined with the police killings of Philando Castile and Alton Sterling and the toxicity of racism that is embedded in America.  All of these deaths have broken the nation’s heart and caused many to wonder where we are headed, particularly now with that Fascist wanna-be Donald Trump trying to manhandle his way into the driver’s seat.

There are so many reasons for the situation we’re in that there is no point in finding some group to blame because there is enough to go around.

The police have a very tough job and they are not the enemy here and neither is the Black Lives Matter movement or those who respond with All Lives Matter.  All lives do matter, but it is Black lives that were bought and sold as products for hundreds of years.  It was Black lives that were lynched by the thousands, some at celebratory events attended by Christian families, none of whom thought Black lives matter at all.   Their descendants are still among us, and because the enemy, that mentality that allows  slavery and lynching, where black people are not seen as fully human, has not been vanquished. and although it is in the core of America, it is not a part of the American curriculum, but should be included as part of the Common Core because the study of that history helps explain where we are today.

When Mr. Castile informed the officer that he had a firearm, was that information taken, even unconsciously, as a reasonable cause to shoot him?   This would not seem possible if not another Black man with a gun in his waistband was killed while on the ground with no provocation.  Without the video, “a gun was recovered” makes any statement by the officers true.  How many times has a weapon on the scene been a “green light” in a race killing?   That is an impossible thought until last week.

But it isn’t just lethal force that is the problem.  A just-released study, “Surprising New Evidence Shows Bias in Police Use of Force but Not in Shootings”, found no discrepancy in the use of lethal force toward Blacks or whites, but it found that less than lethal force, the physical handling of teens,   is where much of the distrust on the street comes from.  And it suggests that swift and sure punishment not be limited to the use of lethal force, and that police training and intense work on community relations, can bring police and communities closer together.

And on the streets there needs to be a decrease in police encountering situations.  Young people have to have their lives crowded with positive activities and opportunities.  They should be too busy to be standing around with idle hands.   It should be becoming very clear in this presidential election year that there has to be new thinking and what was not possible six months ago is what has to be done today.  Public schools with excellent well-paid teachers, year-round extended hours, study hall, music, athletics, all of it poured in as an answer to the national emergency that is the educational disaster taking place in the Black community.  In this most political season, politicians must be made to understand that the condition of the education system is not only a threat to the community, but to their staying in office.

In New York City, blame for the economic conditions that create police encounters and encourages “lifestyles of the poor and hopeless”, extends to the expenditures of the city budget, where only .3% went to certified Black businesses in the last fiscal year.  And the MWBE program, with its roots in the theft of labor from Africans and the theft of land from indigenous people and the slaughter of both, is where Asians and white women receive over 85% of the spending.   This is the kind of thing that has to change.

After the mourning, there is a lot of work to be done.  Register and vote!  Election deadlines are on page 15.