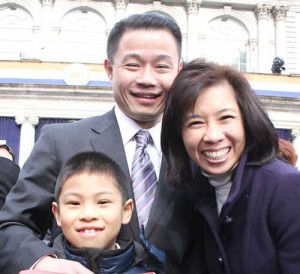 As we mark the 50th Anniversary of the March on Washington for voting rights and jobs we see voter suppression laws going into place across the country and the unemployment rate for African-Americans remaining at twice that of whites.   After slavery, Reconstruction, Jim Crow and the Civil Rights struggles, it is a duty to vote.  To stay at home and not vote is a mortal sin.   Medgar Evers, Andrew Goodman, James Chaney, Michael Schwerner, did not give their lives just so that we can walk around with cell phones and watch politics as though it only takes place on a screen.

Congressman John Lewis of Ga., who had his head bloodied on March 7, 1965 while marching for voting rights across the Edmond Pettus Bridge in Selma, Alabama, spoke of the current assault on voting rights at the Lincoln Memorial marking the anniversary.  He said “I come back here again to say, for the most part, those days are gone but we have another fight. We must stand up and fight the good fight as we march today for there are forces, people trying to take us back. No one’s gonna take us back. We cannot go back. I am not going to stand by and let the Supreme Court take the right to vote away from us. You cannot stand by. You cannot sit down. You got to stand up. Speak up. Speak out, and get in the way. Make some noise!”

And the best way to make some noise in Brooklyn, to demonstrate that you will not be a part of the self-suppression of the black vote, is for registered Democrats to come out and cast a ballot on Tuesday, September 10th.

American revolutionary Thomas Paine wrote “What Archimedes said of the mechanical powers, may be applied to Reason and Liberty: ‘Had we,’ said he, ‘a place to stand upon, we might raise the world.’ The revolution of America presented in politics what was only theory in mechanics”.  And following that same theme, Thomas Jefferson wrote “The good opinion of mankind, like the lever of Archimedes, with the given fulcrum, moves the world”.

The 89% of eligible voters who did not vote in the last primary, those “unlikely” voters, are potentially the most, With the electoral process as the place to stand, the candidacy of John Liu as the fulcrum and the “good opinion” of these voters as the lever, it is possible to change New York City, a world they thought had been fixed in concrete.

Some look at the rising and ever-evolving skyline and say the Bloomberg years have been the best of times.  Others, and please count us among them, look at the closing of day care centers, the failing education system, the wholesale stop-and-frisk of young people, the closing of afterschool programs, the welfare programs in the form of special tax consideration for hedge funds, financial institutions and insurance companies, the privatization and outsourcing of work that can be done by local companies and city workers, the hobbling of a generation of young people, the trampling of the poor and say these are the worst of times and they have to come to a close.

We support John Liu for mayor for only one reason, he’s the best person for the job.  He understands that the core job of a mayor is to care for the human capital and physical infrastructure of the city and to do this by making investments in each that promote resiliency and preparedness for the future.  In his People’s Budget John Liu demonstrates how that is to be done and how it is to be paid for.   Other candidates will try to adopt bits and pieces, but only Liu has the whole package and the ability to carry it out.   And that is why the financial elite are pushing him aside, he’s laid out a plan of how he’s coming to retrieve our money from their pockets and since he’s done it before as comptroller, they know he means it.   This is the guy we need in office.

The good part of about being one of the 89% who did not vote in the last election, is that there are no worries about polls or “wasting” a vote, as it was just thrown away last time.   But now it can be used to make a statement about the city you want to see in the future.  The kind of people who murdered Evers, Goodman, Chaney and Schwerner and the kind of folks pushing through the voter suppression laws, would all be among those hoping African-Americans do not come out and vote.

This is an opportunity to talk back to the screen and make the ancestors proud.   On Tuesday, September 10th, come out and vote for the candidate of your choice.   And if you want your vote to voice your feelings about the direction of the city, then vote for John C. Liu for Mayor.