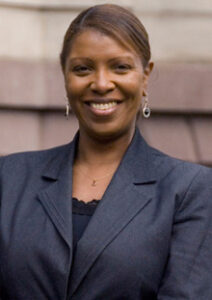 Tish James, who has acted as a public interest lawyer filing multiple lawsuits against city agencies, announced her campaign for New York State Attorney General, last week, saying “For those of you who know me, you know that I am about people – not politics or privilege.

“Whether you’re a teacher in Buffalo, a small business owner on Long Island, a construction worker in the Bronx, or a family-farm owner in Columbia County, I won’t stop working for you.

Our campaign just started but we are only a few short months away from the September Primary. I need your support today!

“We find ourselves in a precarious time in this country – our federal government is using the law as a tool to attack so many groups of people. As the next Attorney General of New York State, I will use the law to FIGHT BACK and protect our most vulnerable citizens. New York State must be a proven example of equality and justice for all under the law.

I hope you will join us as we spread our message of equal justice across the state.

“Together, we will change New York. ”

Hailing from Buffalo, NY, Ms. Eve is a former adviser to Democrats Hillary Clinton and Andrew Cuomo and has announced her candidacy for New York attorney general. AP reports she “serves on the board of the Port Authority of New York and New Jersey and served in the Cuomo administration in a senior economic development position.”

From the NY Times: “In an interview with The New York Times on Monday, Ms. Eve acknowledged the heightened attention to diversity in political leadership but emphasized her own accomplishments. “I am proud to be a woman, and a woman of color in particular,” she said. “But I’m running because I believe I’m the best person to be the attorney general of our state.”

“Ms. Eve, 53, a graduate of Harvard Law School, has worked for former Vice President Joseph R. Biden and Mrs. Clinton when they were in the Senate, and also served as a senior adviser to Mrs. Clinton’s 2008 presidential campaign. From 2011 to 2013, she served as Mr. Cuomo’s deputy economic development secretary.

“Ms. Eve said she planned to attend the state party’s convention this week, where she will seek the requisite 25 percent of delegate votes to ensure a ballot spot for September’s primary. If unsuccessful, she would secure a spot by collecting signatures from enrolled Democrats across the state.

“The level of distrust about government and public service right now is at an all-time high,” she said. “If I don’t get the 25 percent this week, and wind up making my case directly to Democratic voters, that’s really not a bad place to be.”