Trump Win is no mandate 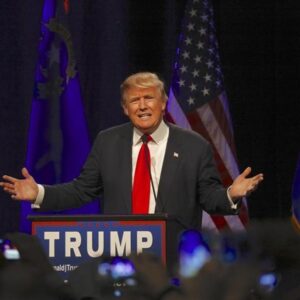 There are those who think Donald Trump somehow won a mandate on Tuesday(Election) night. He did not.

This notion was proffered by House Speaker Paul Ryan, who said that the president-elect had “earned a mandate”, a notion seconded by Kellyanne Conway, Trump’s campaign manager.

In my opinion, a mandate is when one is elected by an overwhelming majority of the voters. In Trump’s case, that did not happen. The voters chose Hillary Clinton over Trump by nearly 1 million votes: Trump 60,371,193, and Clinton 61,039,676. Clinton polled 4,428,022 less voters than Obama pulled in 2012. Trump polled 562,311 less votes than Mitt Romney in 2012. A plus margin of 3.8 million for Trump in 2016. Hillary lost to the Electoral College. These numbers put the lie to the rhetoric that Trump brought out more Republican voters than any other candidate in the history of the party. If that was true at all it had to be true for the primaries only.

Winning the most votes may not get you the White House but it ought to spare you in the court of conventional wisdom from being deemed a scolded loser. Donald Trump is president because of a quirk in the system – that doesn’t undermine his legitimacy but it does demolish the idea of a mandate.

The vote for Trump was a strange one indeed.

Polls were consistently in favor of Clinton.

Donald Trump’s rhetoric was not a popular public one but resonated with many voters. Many voters publicly denounced Trump but secretly supported him. When asked by pollsters if they supported or would vote for Trump, the answer was no but their true preference was Trump.

There seems to be a subtle desire by a faction of the voting public to reset the social, economic and political clock back to 1918. This equates to taking their country back and making America Great again. That is the era when America was ruled by white men of European descent. Minorities, women  and people of  color could not vote and had no say in the US Government.

Trump further emboldened this faction by declaring himself a “law-and-order” candidate, making it clear that as it regards the justice system his sympathies were entirely with the police and not at all with the “Black Lives Matter” movement – but 48% of the voters told exit pollers that the justice system treats Blacks unfairly.

Soon after Obama was elected in 2008, the call went out to “Take our country back”. And that the country, being led by a Black man, was going in the wrong direction. Trump’s remarks about Obama being “weak” and “inept” also resonated with these voters.

After the “Never Trump,” “Dump Trump”,  his racist statements and his brutal view of women was exposed, Trump polled 46% of women voters and 8% of Black voters. This group of voters was crucial to the Clinton campaign.

While Clinton was dependent on the votes from the nation’s big cities where the large electoral votes are, Trump racked up votes among the rural towns and hamlets of the US thereby defeating Clinton in the Electoral College.

So as Trump and his cabinet tries to convince America he is doing the will of the people or he has a mandate from the people to build a wall, or to ban all Muslims, or to repeal Obamacare, or to stack the High Court with conservatives, or to reinstitute “Stop-and-Frisk”, or to deport 11 million immigrants, that  just isn’t how the majority of the people voted.

The mandate dictated by the people is they want change managed and controlled by a bipartisan Congress. They want an end to the obstructionist policies practiced by the party of “NO”. They want legislation that promotes the interest of the taxpayers rather than that of the political party.

The mandate is that Trump has to listen and govern all US citizens equally and fairly.

Trump Is Playing the China Card. Who Believes Him?

President Barack Obama’s Commencement Address to the Class of 2020 HBCU Scholars, Saturday May 16, 2020