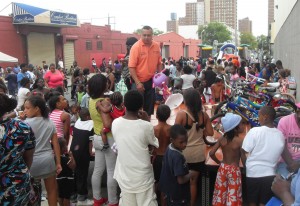 Brownsville can tell the time of year by Trucked Out SUV events. Christmas. Easter. Thanksgiving. Local residents flock to Trucked Out’s back-to-school street party, one of their most popular events. “They know that summer is coming to a close, and we do our back-to-school thing,” said Lance Goodwin, President of Trucked Out SUV. The organization closes off an entire block and provides a day of fun for community children, including rides, food, a raffle to give away dozens of bikes and scooters, and of course, backpacks filled with school supplies.
Freda, mother of a 4-, 5- and 9-year-old, lives in the nearby Junius Street shelter with her children. “I am very glad I came because I work at night. My kids really wanted to come,” Freda said. Happy that all three will attend the same school, Freda said her 5-year-old (Ida) “is really ready. She wants to go to school really bad.”
The proud mom displayed her 9-year-old’s report card filled with 3’s and a good conduct report. “I make sure she is doing her best. She gets good grades and she’s a good girl,” said Freda. “She’s a whiz at math. We did a lot of reading this summer.”
Kesha, mom of Mya, 7, and Hawa, 9, said, “I think it was good for the kids to come. It gets them prepared mentally that it’s time for them to get ready to go back to school. It’s important because they are going to go home, have their books packed, and they are going to be ready.” Every day the girls count down, “It’s almost time for school.” What do they like about school? “I like to listen,” said Mya. “I like math.” Hawa said, “I like that we can write and I like math.”
Tina, President of Trucked Out Social Club, told the secret to their back-to-school event. “We enjoy it. The parents enjoy it, as well as the kids,” Tina said with a smile. “I think it benefits those who are unable to buy school supplies for their kids. It’s a day where their kids get a chance to enjoy rides, food and bike and scooter raffles. It’s something for the kids. But it benefits everybody.”
Trucked Out has been hosting their back-to-school event for six years.
“We were looking for a way to give back to the community. We are an SUV club, so we all have large trucks. We can afford the gas and insurance. So, we consider ourselves blessed. I was always taught to pass that blessing on,” said Lance. Trucked Out consists of four clubs: Trucked Out SUV – the guys, Trucked Out Diva – the women, Trucked Out Social Club and Trucked Out Auto Club. There are approximately 60 members. “There were a lot more… but this is not for everybody,” said Lance. “This is more of a vice than it is anything else because you are constantly giving. There is nothing you get in return except the love of the people.”
The club is located in the heart of Brownsville, surrounded by public housing developments, homeless shelters and a juvenile prison. “We are here in Brownsville, and Brownsville is one of the poorest neighborhoods in Brooklyn,” said Lance.  “I could not see us around here and not give back to these people who support us.” The relationship between Trucked Out and the community is symbiotic. “Whatever we do, they come out. We want to support them,” he said. “Somebody has to take a stand, step up and do something. We can’t depend on anybody to do it but ourselves. So, we do it.”
What started as camaraderie and bonding around their love of cars, trucks and motorcycles morphed into community service because “so many kids looked up to us because of the big trucks.” That was the doorway to talk to kids and try to get them on the straight and narrow. A conversation may start with a little kid saying, “I like that truck, I like that truck.” Lance and his fellow members use the trucks to “open that rapport with them. Now I can sit down and talk to them: ‘Are you in school? Go to school.’”
“Sometimes it works, sometimes it doesn’t,” Lance said philosophically. “It’s about leading by example. I am not going to ask somebody to do what I wouldn’t do myself, from the littlest thing down to the biggest thing. Whatever needs to be done, we’ll get it done. It’s about community service.”
Lance uses the trucks to encourage youth to be responsible. He tells them, “Get a job because in order to be in my club, you have to have a job.” Lance says he doesn’t do “the ‘hustle’ thing. I don’t do the ‘no work and lying on your behind’ thing.” He says members have to have a job “because this is a vice. You don’t get anything in return. We don’t get any money back. All we are about is giving.”
Looking around at the hundreds of children happily showing off their new backpacks and inspecting their contents Tina said, “I think it gives the kids focus and it gives them high hopes that they see grown-ups giving back to the community and it’s not just about seeing people standing on the corner. They see Black people giving back. I do think it gets them focused and ready for school.”