Triumph in the Face of Foreclosure: From the Patricia F. Graham-Robinson Music School, lessons in music, life and more

The 590 Madison Street building has been a music-learning and study center for more than 85 years, serving thousands of students.

It was founded in 1930 by Philadelphia-born, Barbados-raised L. Elsie Cumberbatch Graham to house one of Brooklyn’s first official music instruction schools owned and operated by a person of color.

Ms. Graham’s Girls High School teacher urged Elsie to open her own school and share her extraordinary music gifts. She opened the Stuyvesant School of Music where, as a teen, she taught voice and organ to children and adults. From that space, she also started three choirs: a children’s, men’s and a men’s and women’s choir.

That in itself is historic, but the rooms and walls of that building and that school – now run by Ms. Graham’s daughter as the Patricia F. Robinson Music Studio – also echo a song about gifts, legacy and survival like no other music school in the Borough of Brooklyn.

Ms. Graham-Robinson continues to build on the legacy, turning out world-class musicians like mezzo-soprano Bonita Hyman, who makes her Metropolitan Opera debut this spring performing in Elektra.  But for a while it was a struggle to keep the music going.

Yet, Patricia, a former Nathanial Macon J.H.S. (now Ruggles) classmate of this writer, has tapped into the same “never give up” spirit that compelled her mother to teach through the dirges of the Depression and keep in time with the day-to-day while raising, like her mother, two children.

A few years ago, Ms. Robinson, a classical musician, issued a call to the community for pianos; the response was enormous, and included gifts from music lovers, piano movers, former students from all over the city.

Five years later, she was forced to turn to refinancing to keep the doors open.  Every cent was invested in the music school for concerts, scholarships, travel and more.  When the bank was just about to close her doors, Patricia had no choice but to inform the students and their families.

Edward and Tanya Odom, parents of one of her students, stepped forward.  Edward, a former trumpet player who years before had taken lessons with Ms. Graham, the elder, asked: Why didn’t you tell us sooner? 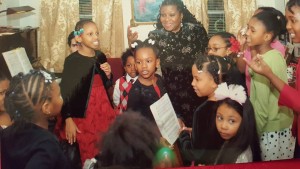 Long story short: the Odoms purchased the property to essentially save the school.  Now Pat pays an affordable rent for a situation that is beyond win-win.

“Ed helped my mom with the music school from the time he was a very young man learning to play the trumpet,” says Patricia.

“When he discovered I was in the process of selling – which was my mom’s instructions in the will in the event the school was lost–he told me he wanted to save what my mother and I had built.”

Pat immediately went into contract with the Odoms. “Since then, the school has grown and progressed in many wonderful ways.  Without Tanya and Ed the school would have been lost.”

Two years ago this month, former students of Elsie Graham came together to celebrate the centennial of her birth year and share personal memories of lessons learned at 590 Madison Street – where the sound of music is alive and well.