Towns Withdraws: The End of an Era 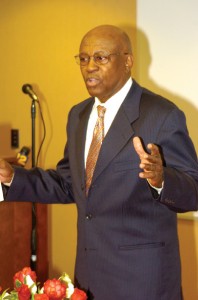 Last year at a Jefferson Avenue (between Tompkins and Throop Avenues) block party, I heartily shouted out my favorite phrase: “Bed-Stuy, do or die!”

Some do not like that term, which has been buried in the archives of Central Brooklyn’s past.
In fact, in some sense, it could be said that the old Bed-Stuy did, in fact, die, given the huge demographic changes of the past two decades.

And now, with Congressman Ed Towns’ announcement that he was retiring after 30 years in office, it’s more clear than ever that a new Bed-Stuy is being born.

At the birthing table these days, eager with scalpels, are Assemblyman Hakeem Jeffries and Councilman Charles Barron, who are vying with eagerness to replace Towns as Central Brooklyn’s Big Daddy in Washington.
Here’s the interesting thing that makes Bed-Stuy so important in this.

Jeffries, a 41-year-old attorney at ease in corporate board rooms (as well as on the street), now represents Fort Greene, a place that has become a Brooklyn version of Chelsea, with snazzy hipster restaurants up and down DeKalb Avenue, a gathering place for countless newcomers from Michigan, Wisconsin, Alaska and beyond.

Barron, a ex-Black Panther who says he sometimes likes to curse out (white people) for emotional release, was elected to the Council from Brownsville and neighboring sections, which have some of the highest crime and poverty rates in the city, and where young black men are stopped-and-frisked by police every day of the week.

Bed-Stuy is the no-man’s-land of the congressional race and all are waiting to see which way she will go.
“It’s neither of their bases,” said political consultant Lupe Tood, now working as a spokesperson with Jeffries.

Bedford-Stuyvesant, you see, was once an archetypical ghetto. I remember well the 1964 riots and the quick departure of Jewish storeowners after that, as they their time was up and they sold their businesses to a new generation of Latinos and Arabs of more recent years; and even black professionals abandoned the community for what they considered prettier pastures.

How different things are now. Everyone wants to come back to Bed-Stuy. There are so many white young women walking from Fulton Street subway stations at night that my grandparents would not believe it, even if they were alive to see it.

So how will Bed-Stuy go in the June 26 election?

Perhaps the most telling indicator is the decision, a few weeks ago, by the Vanguard Independent Democratic Association(VIDA). They invited Towns, Jeffries and Barron to show up and make their cases before the group. Towns didn’t even show up (perhaps an early indication he had little desire for the fury that would blow through this political race).

VIDA chose to support Jeffries, said activist and Bed-Stuy political scholar Dr. John Flateau.
It’s since occurred to me, by the way, that perhaps Barron burned his bridge with VIDA back a few years ago when he supported challenger Mark Winston Griffith over incumbent Bed-Stuy Council member Al Vann.

Then again, burning bridges is Barron’s favorite pastime, said political consultant Hank Sheinkopf.
As for Barron, he says he will spend his coming days and nights on the streets and at meetings, seeking votes of those who, he said, want “a fighter” like him to speak for them in Washington.

Barron told me that Jeffries “has no history in our struggle” and that he is a “go along, get along” politician currying favor with unions and political bigwigs.

Almost any other elected official in the city would take issue with that, pointing out that Jeffries has pushed for state laws controlling aggressive police tactics, for example, and recently sponsored a law making sure prisoners get counted in the communities they come from, rather than the upstate counties that hold them behind bars. This means more political power for Central Brooklyn.

History matters here. The redrawn lines of Towns’ district (now the Eighth Congressional District of New York) leaves it less Black than it was before. But it is still mostly Black. And its history as a Voting Rights District – requiring review by Washington before changes to its makeup – make it especially meaningful to Brooklyn old-timers and others who appreciate Civil Rights history.

Jeffries says it is he who can bond the past with the present, and he is strongly critical of Barron for Barron’s continual complaining about alleged shortcomings of President Barack Obama.

“This is a generational moment,” Jeffries said of the current political contest (in which he has perhaps eight times more than Barron in campaign contributions and far more endorsements from political leaders and unions).

Jeffries said the race is between “someone who has a strong legislative record” and “someone whose focus has been on rhetorical flourish.”

He did not say precisely who was which, but given the tenor of the exchanges so far, no one really has to guess.
Ron Howell is an associate professor of journalism at Brooklyn College.