In perfect timing for what is slated to be the “Year of the Woman,” Angela Hope Weusi graciously gathered African women delegates and interested community members alike in her restaurant business, “For My Sweet.” Attended by lawyers, professors and dignitaries, the purpose of the gathering was to network and shed much-needed light on pressing issues that pertain to women of the Diaspora, and by extension, all women. A key issue that came up on more than one occasion is the atrocity that is human trafficking. 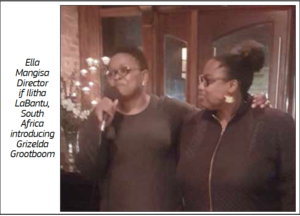 After a filling dinner, the tone of the evening was set, and the event expanded from being merely a dinner into a full-fledged forum geared towards illuminating various topics pertaining to the status of women. The star of the evening was unquestionably a South African woman who shared her equal part-inspiring and equal part-tearjerking story of how she overcame circumstances not for the faint of heart. The courageous survivor recalled having been forced into selling drugs at a young age. What started out as selling drugs tragically spiraled into a series of unfortunate happenings, including her being forced into prostitution on multiple occasions. Despite, or in spite of, such dismal chain of events, this woman survived to tell her story and we are all the more better because of it.

Mirroring this survivor’s story of hope, other African delegates and dignitaries spoke on their work with the United Nations-sponsored “Commission on the Status of Women” and how they have been engaged in a prolonged effort to improve, for lack of better words, the status of women. The host of the event, Angela Hope Weusi, also briefly spoke explaining that “the space [‘For My Sweet’] was created for us to share” in a showcase of her love and unyielding advocacy of her people. She added that, “We’re here to find our commonalities,” in addition to warning against the “ploy to make Black people scared of one another” in detailing one of the pivotal purposes of the gathering.

The, of course female, President of the Pan-African Parliament, who is from Tanzania, also spoke proclaiming, among other empowering affirmations, “This is my second home,” with this being “For My Sweet.” How sweet. Another speaker from South Africa, whose name is Tandi, also delineated her long activism with women’s rights. In fact, she had been so entrenched with her work on the ground to improve the livelihood of women that she recalled some of her son’s earliest words being “African women.”

There was also, as one man who spoke so eloquently pointed out, “Three men in attendance.” To think they had the gall (just kidding). Though the hosts of the evening encouraged all to speak, only two of the three men in attendance spoke. One male speaker was a professor at Fairleigh Dickinson University and addressed all of the, in his own words, “Beautiful Black Queens” in attendance. Understandably so, this professor was particularly in awe of the resilience of the survivor who so bravely and articulately shared her story of triumph from a life of childhood and eventually adult prostitution. The other male speaker was, as he made it a point to mention, a 70 years young man.  This elder gave a history lesson, presumably in an effort to keep with the theme of the night: “The livelihood and well-being of women,” particularly women of the Diaspora. Interestingly enough, this man described a Black woman who saved George Washington’s life in the Battle of Brooklyn/Long Island during the Revolutionary War. Ashamedly, I have never heard this story, but to my consolation, according to the de facto griot telling the story, many people have not. The reason being is that this Black woman, whom his story pivoted, was one who would categorize as an unsung hero. Fittingly, his story closed the evening out and that’s when the dancing ensued.

Priscilla Mensah covers topics related to improving health, wellness and overall community empowerment. She is also a former Health Reporting Fellow at the CUNY Graduate School of Journalism and can be reached at pmensahbrooklyn@gmail.com.