The Tending of the Earth

“I come from a long line of Queen Mothers, Ibaye. So all permissions have been given to me through the system of womanhood, of African-centered ways that Queen Mothers operate in a village. All of my instructions have been taken from there.” 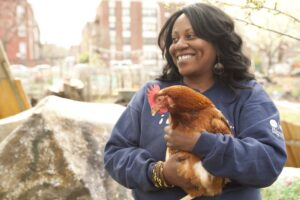 Meeting Yonnette Fleming is an experience unto itself. She appears as a woman, but her energy is like that of a whirlwind, bringing the spirits of our past into the creation of our future while nurturing the community by using her hands, her heart and the Earth. Yonnette is a native of Guyana, she arrived in the US at age 16. She says that she learned much of creation from her grandmother’s life.

“My own grandmother was a person that had an orchard of trees, and she was the matriarch in the family. It was always about the agriculture, and the crops, and culture and dance and music and that sort of movement that we do to reconstitute ourselves. The risks of being a woman that nurtures a community are many. You take great risks, you must operate for the most part without fear, even when there is a lack, or trouble or violence, even then you must have that sense of groundedness. And that groundedness comes from the relationship with the Earth. That level of continuity and infinity and eternity, even understanding that all of what we are experiencing is but a speck of history or time as we know it, and being centered in nurturing in that way; nurturing to humans, nurturing to animals and nurturing to the plants and the trees who are the wisdom keepers of the village.”

Before her name carried titles like “urban farmer” or “community Earth steward” or “food justice educator,” Yonnette was raising a family and working as a “corporate soldier.” The story of how she first connected with the Hattie Carthan Community Garden can be told no better than through her own words.

“I want to speak to you about continuity and the migration of the African spirit. It goes wherever in the Diaspora where it is needed. Universal tensions draw it there. So, I want to state that as the universal template for how people move within the Diaspora. I was walking by the garden in 2003, and at that time I was a corporate soldier, walking by every day to go to work on the G train. But also, at the time, I was very centered in my Africanism. I was drumming intensely in a square called the Congo Square where my great-aunt struggled along with community leaders like Richard Green so that African people would have the freedom to congregate and sort their frequencies and vibrations together in one place in order to allow for some things to happen.

So, I called Green Thumb and they gave me the contact info for Magnolia. I called Magnolia. When I called, the person that answered the phone said, “Well, I really like what you’re saying but I just want you to know that this is a really hard place. No one comes here. No one is interested in the programs that happen here. So, I want you to know that upfront. But I think it’s a great idea if you would join the garden.” So, I joined. But I didn’t join as some officer. For two or three years I spent all my time just picking up trash, tending to the plants, and listening to the plants for the first time. I had never had that opportunity as an African to be in a position to study the plant, from the plants. So, the trees told me a lot about the history of the space. The people told me a lot about what they knew of the space, and then I began to serve more fully.

And serve she has.

Yonnette, or Farmer Yon, as she is affectionately known, has been working tirelessly in the Hattie Carthan Community Garden and Farm for 16 years. She is the President of the Hattie Carthan Community Garden and Farm, but you’ll almost never find her in a business suit or an office. She is with the Earth, listening to it, nurturing it and creating from it. She has created an entire portfolio of sustainability projects, including the food markets that are operated right out of the garden. She teaches community children about healthy cooking and urban farming. She is an educator in the field of herbs and medicinal plants and a Food Justice Educator for Farm School NYC. Through her work, the Hattie Carthan Community Garden and Farm feeds organic, nutrient-rich fruits, vegetables and herbs to thousands of Central Brooklyn residents a year, and her work educates and inspires even more. “Look how fortunate we are by having this whole garden. Gardens are spoken about in every creation theory in history, and here we are, this people with the responsibility of keeping and tending to this beautiful space.”

We are fortunate indeed for Farmer Yon.