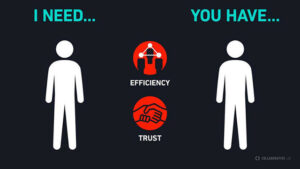 Do you remember being in kindergarten where your teacher would encourage you and your classmates to share?  Sharing is caring was the simple phrase and “Please share your toys” was the teacher’s request.  Today’s sharing economy puts a twist on sharing where financial gain is to be gotten.  The sharing economy is the renting of little used property to another person for financial gain.

Lyft, c. 2012, headquartered in Long Island City, NY; Uber, headquartered in San Francisco, founded in 2009; and Spinlister c. 2011, headquartered in Santa Monica, CA, are ride-sharing operations.  Uber and Lyft share cars where the user hails the driver through the cell phone app.  Spinlister connects bicycle and motorcycle owners with people who rent these vehicles for a stated number of hours.  The real life ridesharing exchanges between drivers and passengers spawned a comedy web series called Ride.

DogVacay, c. 2012, headquartered in Santa Monica, CA, connects dog owners who need to be away from home with dog lovers who are willing to keep the dogs in their homes.  This allows the animal to walk around a home or be taken out for walks similar to being kept by their owners.  This is an alternative to pet kennels. 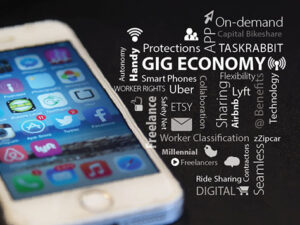 TaskRabbit, c. 2008, headquartered in San Francisco, connects a private individual or business with a person or a group who is willing and capable of completing marketing, household chores, major custodial jobs, event production, shopping, posting and delivery, moving, and even hair braiding assignments.  The Tasker sets up an account that lists the tasks he believes he can accomplish and the hourly charge for the work.  The Tasker is expected to pay for certain purchases up front and be reimbursed later.  So, it can be a situation that a Tasker spends and gets reimbursed $150 to earn $40.

AirBnB, c. 2008, headquartered in San Francisco, CA, is a home-sharing operation.  AirBnB claims householders in 191 nations are ready to welcome travelers.  This traveling experience takes the edge off being in a new town or country.  This is because the householder agrees to explain the lay of the land to the visitor.  Ideally, the householder is present during the stay; however, there are instances when visitors are “home alone”.  AirBnB has a webinar that explains how a host can keep her presence and hospitality felt throughout that guest’s stay.

AirBnB features exotic and unusual domiciles too.  Does the idea of rocking in a gondola or using a ladder to get up a tree to stay in a fully decorated one-bedroom tree house sound like a great get away?  Then, visit AirBnB to peruse these offerings.  This writer met an AirBnB host, Jim, who rents out his solar-powered gondola.  Jim says his gondola stays booked.  He just needs to spend time explaining how to run the power and appliances on the gondola before he leaves his visitors to themselves.

What is human existence without misunderstanding and squabbling?  Probably there is no existence.  One of the major responsibilities of the intermediary is to resolve conflicts and complaints of inadequately described tasks or inadequately equipped service providers.  Both parties can access support via cell phone or email.  AirBnB is famous for advising hosts or guests to call the police first before them should there be potential for physical harm.

A search on AirBnB’s website for hosts located in Bedford-Stuyvesant revealed just three offering the entire residence; five offering a private room, and two offering shared space.  Given the US economy is still pulling itself out of an economic chasm, it was anticipated that more Bed-Stuy householders would catch the “boarding house spirit” and use AirBnB as another revenue stream.  Kyra–whose last name is withheld to maintain AirBnB service integrity—agreed to share her experience of being an AirBnB host.

Kyra has a well-appointed brownstone located on the eastern edge of Bedford-Stuyvesant.  She offers two private rooms, each containing a bed, a dresser, a chair, a rug and a waste basket. She gives them keys to their assigned bedrooms to give guests that extra sense of security.

“I started hosting through AirBnb April 2016.  I have had 11 separate bookings between April and now (May 6, 2016).  I had been hosting foreign students sourcing them through language schools for ten years.  When the schools slowed the flow of students to me, I looked into AirBnB.”

Cashflow is the dominant factor in establishing a host account for her.  “It’s a good income supplement and a good way to meet people.  It’s easier than the language school service because I don’t have to cook for them, though I do offer coffee and tea, and then I can do room cleaning once the guest(s) leaves.”

She learned about what other AirBnb hosts are doing or not doing from the comments she hears from people: “Oh! This is clean!” and “You have a nice place!”  They tell her about places that can stand good housekeeping.

Kyra has had dream guests and quirky guests cross her threshold.  She did not express such apprehension about a guest that would have her consider asking her to leave or to call the police.  “I had a chef from Seattle stay with me who was searching for an apartment in New York City.  He cooked for the two days he was there.  Right now, I have a doctor [from China] with her grown daughter.  She gave me a lot of advice about China since I said I wanted to visit there.”

Her quirky guests include a woman that had her underwear hanging in the bathroom and placed her soap in Kyra’s soap dish.  Apparently, the guest felt a bit too familial toward Kyra.  One incident from the Instant Booking option had her turn off that function.

“It was a situation where a woman used my place for a “rendez-vous” with her boyfriend because her mother didn’t permit the man to stay over”.  The guest said she would arrive at 7:30 PM; then, she changed the check-in time to 8:30 PM; and finally, called me at 10:20 PM to say she was in front of the building.  The boyfriend arrived around 11 PM.  He asked to step out to the backyard for a smoke.  He was actually smoking marijuana.  He later asked me for orange juice in a take-away container.  I directed him to the corner convenience store.  After looking over my home, he spotted my Nutribullet blender and asked me to make him a shake.”

She has also been a victim to an attempt of identity theft.  A potential guest sent a query that included a phony Airbnb.com account for her to visit.  She quickly recovered account security by changing her password.  Second to resolving host-guest conflict for AirBnB is maintaining the security of guest and host accounts.

To be an AirBnB or any home share host, hospitality ought to be in the forefront of the mind.  Glossing through reviews of several AirBnB hosts reveals the key traits that lead to success include patience, great social skills, open-mindedness, and being available to answer questions.