I hope behind those closed doors they had a copy of historian Howard Zinn’s “Columbus and Western Civilization” from which the following excerpt is drawn. If they had, they may want to move the current statue to a museum and replace it with a monument to the Indigenous People at the newly-named Indigenous People’s Circle 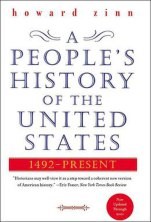 Howard Zinn: Let me make a confession. I knew very little about Columbus until about twelve years ago when I began writing my book, “A People’s History of the United States”. I had a Ph.D. in history from Columbia University—that is, I had the proper training of a historian, and what I knew about Columbus was pretty much what I had learned in elementary school.

But when I began to write my “People’s History”, I decided I must learn about Columbus. I had already concluded that I did not want to write just another overview of American history—I knew my point of view would be different. I was going to write about the United States from the point of view of those people who had been largely neglected in the history books: the indigenous Americans, the Black slaves, the women, the working people, whether native or immigrant.

And so, how must I tell the story of Columbus? I concluded, I must see him through the eyes of the people who were here when he arrived, the people he called “Indians” because he thought he was in Asia.

Well, they left no memoirs, no histories. Their culture was an oral culture, not a written one. Besides, they had been wiped out in a few decades after Columbus’ arrival. So I was compelled to turn to the next best thing: the Spaniards who were on the scene at the time. First, Columbus himself. He had kept a journal.

His journal was revealing. He described the people who greeted him when he landed in the Bahamas—they were Arawak Indians, sometimes called Tainos—and told how they waded out into the sea to greet him and his men who must have looked and sounded like people from another world and brought them gifts of various kinds. He described them as peaceable, gentle, and said: “They do not bear arms, and do not know them for I showed them a sword—they took it by the edge and cut themselves.”

Throughout his journal, over the next months, Columbus spoke of the Native Americans with what seemed like admiring awe: “They are the best people in the world, and above all, the gentlest—without knowledge of what is evil—nor do they murder or steal…they love their neighbors as themselves and they have the sweetest talk in the world…always laughing.”

And in a letter he wrote to one of his Spanish patrons, Columbus said:

“They are very simple and honest and exceedingly liberal with all they have, none of them refusing anything he may possess when he is asked for it. They exhibit great love toward all others in preference to themselves.” But then, in the midst of all this, in his journal, Columbus writes: “They would make fine servants. With fifty men we could subjugate them all and make them do whatever we want.”

Yes, this was how Columbus saw the Indians—not as hospitable hosts, but as “servants” to “do whatever we want”.

And what did Columbus want? This is not hard to determine. In the first two weeks of journal entries, there is one word that recurs 75 times: GOLD.

In the standard accounts of Columbus, what is emphasized again and again is his religious feeling, his desire to convert the natives to Christianity, his reverence for the Bible. Yes, he was concerned about God. But more about gold. Just one additional letter. His was a limited alphabet. Yes, all over the island of Hispaniola, where he, his brothers, his men, spent most of their time, he erected crosses. But also, all over the island, they built gallows—340 of them by the year 1500. Crosses and gallows—that deadly historic juxtaposition.

In his quest for gold, Columbus, seeing bits of gold among the Indians, concluded there were huge amounts of it. He ordered the natives to find a certain amount of gold within a certain period of time. And if they did not meet their quota, their arms were hacked off. The others were to learn from this and deliver the gold.

Samuel Eliot Morison, the Harvard historian who was Columbus’ admiring biographer, acknowledged this.

“Whoever thought up this ghastly system, Columbus was responsible for it, as the only means of producing gold for export…. Those who fled to the mountains were hunted with hounds, and of those who escaped, starvation and disease took toll, while thousands of the poor creatures in desperation took cassava poison to end their miseries.”

Morison continues: “So the policy and acts of Columbus for which he alone was responsible began the depopulation of the terrestrial paradise that was Hispaniola in 1492. Of the original natives, estimated by a modern ethnologist at 300,000 in number, one-third were killed off between 1494 and 1496. By 1508, an enumeration showed only 60,000 alive…. in 1548 Oviedo [Morison is referring to Fernandez de Oviedo, the official Spanish historian of the conquest] doubted whether 500 Indians remained.”

But Columbus could not obtain enough gold to send home to impress the King and Queen and his Spanish financiers, so he decided to send back to Spain another kind of loot: slaves. They rounded up about 1,200 natives, selected 500, and these were sent, jammed together, on the voyage across the Atlantic. Two hundred died on the way, of cold, of sickness.

In Columbus’ journal, an entry of September 1498 reads: “From here one might send, in the name of the Holy Trinity, as many slaves as could be sold…”

What the Spaniards did to the Indians is told in horrifying detail by Bartolomé de las Casas, whose writings give the most thorough account of the Spanish-Indian encounter.

Las Casas was a Dominican priest who came to the New World a few years after Columbus, spent 40 years on Hispaniola and nearby islands, and became the leading advocate in Spain for the rights of the natives.

Las Casas, in his book The Devastation of the Indies, writes of the Arawaks: “…of all the infinite universe of humanity, these people are the most guileless, the most devoid of wickedness and duplicity…yet into this sheepfold…there came some Spaniards who immediately behaved like ravening beasts…. Their reason for killing and destroying…is that the Christians have an ultimate aim which is to acquire gold…”

The cruelties multiplied. Las Casas saw soldiers stabbing Indians for sport, dashing babies’ heads on rocks. And when the Indians resisted, the Spaniards hunted them down, equipped for killing with horses, armor plate, lances, pikes, rifles, crossbows, and vicious dogs. Indians who took things belonging to the Spaniards—they were not accustomed to the concept of private ownership and gave freely of their own possessions—were beheaded or burned at the stake.

Las Casas’ testimony was corroborated by other eyewitnesses. A group of Dominican friars, addressing the Spanish monarchy in 1519, hoping for the Spanish government to intercede, told about unspeakable atrocities, children thrown to dogs to be devoured, newborn babies born to women prisoners flung into the jungle to die.

Forced labor in the mines and on the land led to much sickness and death. Many children died because their mothers, overworked and starved, had no milk for them. Las Casas, in Cuba, estimated that 7,000 children died in three months.

The greatest toll was taken by sickness, because the Europeans brought with them diseases against which the natives had no immunity: typhoid, typhus, diphtheria, smallpox.

As in any military conquest, women came in for especially brutal treatment. One Italian nobleman named Cuneo recorded an early sexual encounter. The “Admiral” he refers to is Columbus, who, as part of his agreement with the Spanish monarchy, insisted he be made an Admiral.

…I captured a very beautiful Carib woman, whom the said Lord Admiral gave to me and with whom…I conceived desire to take pleasure. I wanted to put my desire into execution but she did not want it and treated me with her finger nails in such a manner that I wished I had never begun. But seeing that, I took a rope and thrashed her well…. Finally we came to an agreement.

There is other evidence which adds up to a picture of widespread rape of native women.

Samuel Eliot Morison wrote: “In the Bahamas, Cuba and Hispaniola they found young and beautiful women, who everywhere were naked, in most places accessible, and presumably complaisant.” Who presumes this? Morison, and so many others.

Morison saw the conquest as so many writers after him have done, as one of the great romantic adventures of world history. He seemed to get carried away by what appeared to him as a masculine conquest. He wrote:

Never again may mortal men hope to recapture the amazement, the wonder, the delight of those October days in 1492, when the new world gracefully yielded her virginity to the conquering Castilians.

The language of Cuneo (“we came to an agreement”), and of Morison (“gracefully yielded”) written almost 500 years apart, surely suggests how persistent through modern history has been the mythology that rationalizes sexual brutality by seeing it as “complaisant.”

So, I read Columbus’ journal, I read las Casas. I also read Hans Koning’s pioneering work of our time—Columbus: His Enterprise, which, at the time I wrote my People’s History, was the only contemporary account I could find which departed from the standard treatment.

(Teacher) Bill Bigelow did a study of recent children’s books on Columbus. He found them remarkably alike in their repetition of the traditional point of view. A typical fifth-grade biography of Columbus begins: “There once was a boy who loved the salty sea.” Well! I can imagine a children’s biography of Attila the Hun beginning with the sentence: “There once was a boy who loved horses.”

Another children’s book in Bigelow’s study, this time for second-graders: “The King and Queen looked at the gold and the Indians. They listened in wonder to Columbus’ stories of adventure. Then they all went to church to pray and sing.

Read more of Howard Zinn’s “Columbus and Western Civilization” and other thought-provoking essays from a variety of contributors in Russ Kick’s You Are Still Being Lied To, available on Amazon and in all good bookstores.