The People To Comptroller Liu: You Count! 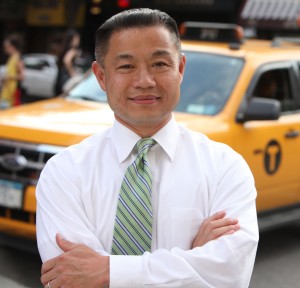 At the 79th Precinct Council’s “National Night Out Against Crime” Tuesday event, walking through the crowds, shaking hands, taking time to talk to the people, Mr. Liu was Number One.

And that’s the way it was the day before, on Monday morning, August 5, in lower Manhattan at a rally in support of him outside of 40 Rector Street – home of New York City’s Campaign Finance Board where matching funds of more than $3M-plus (due to Liu) was denied.

The waves of signage came in all variations: “John Liu for Mayor” messages that were yelled, cried and roared by hundreds of supporters of all races, ages and nationalities.  They easily outnumbered the “resisters”— approximately 90% of Asian descent – who, it was said, were “bussed in” by Liu’s rivals.

“People’s Voice! People’s Money! People’s Vote”!  The chants echoed through the Rector Street canyon: “Give John a Share, Let’s Be Fair” ”What do we want?” “Matching funds!” “When do we want it?” “Now”!

Liu, with the most number of small contributions, was eligible to receive approximately $3.5 million. Currently, for every $1 contributed up to $175 per donor, the city pays $6 in matching funds for a maximum of $1,050 in public funds per contributor. Liu had the largest percentage of small donors.

Inside the hearing on the 6th floor, Amy Loprest, executive director of the five-member CFB, read the decision by Mark S. Piazza, Joseph P. Parkes, S.J., Art Chang and Courtney Hall with Loprest. It was unanimous.  Liu was denied the funds due to campaign “irregularities”. The board said it all boiled down to the recent trial of two Liu campaign workers and a damaging, unreleased internal investigation.

Tuesday, August 6, media announced the awarding of a total of $23.3 million dollars in public funds to NYC candidates, and headlined Liu’s “setback” and “crippling blow”.   Martin Connor, Liu’s campaign lawyer, said (prior to the board’s decision), “It’s no secret that there were problems in the Liu campaign in early 2011, but what the board is proposing is the death penalty for minor transgressions.”  Connor told reporters in the crowded hearing room that the penalty should be based on the “level of wrongdoing”.   The wrongdoing adds up to 35 donations out of more than 6,339.  “Liu’s campaign is the first in campaign history to get this level of scrutiny.”

Father Joseph Parkes, the CFB chair, said “The candidate is ultimately responsible for the campaign’s compliance with the law”.

The CFB ruling was partially based on a report developed by the CFB-hired Thatcher Association. A skeptic asked, “Why didn’t they save money, and do the report themselves?”

“With just five weeks remaining before Primary Election Day, these first public funds payments represent a significant milestone in this election,” said Ms. Loprest.  “Matching funds will allow candidates, at this critical time of the campaign, to focus on what matters most: presenting their views on the issues of the day and their plans for the future of our city.”

Following the verdict, there was controlled outrage as expressed in these comments: “Shouldn’t the board have recused themselves? (Bloomberg selected three CFB members; Quinn, two.) Doesn’t this question their ability to be objective? So how come my money doesn’t count? It’s not about gender, age, color? It’s about the American way, and being fair.  My money is clean.  The people who gave $25, $50 – no one has a right to refuse their right?  Can any of our voices be heard?  It’s a hearing, right? Don’t the people have a right to be heard? Who’s hearing us? We have to show these people, the power of the people!”

“Kangaroo court,” called out a Staten Island resident. “They don’t want to give it to the Comptroller, so (we the people) will have to raise it for him.”

Connor told reporters, “The rules say if they deny us we can appeal.”   But that appeal may not come through until days before the September election.  Too much, too late.

For Arthur Cheliotes, president of Local 1180, Communication Workers which is backing Mr. Liu, the actions of the CFB were a kind of felony:  “A crime has been committed,” he told Our Time Press.   “Now, where do I go to report it?”

Several hours later outside the Municipal Building at One Centre Street, the Comptroller vowed to stay focused: “There’s no time to be distracted.  We have a race to run. The strength of this campaign has never been in the money, it’s always been about the people.”

People like Joe Ann Brown of Brooklyn, seated in the back of the CFB hearing room, who was outraged with the final decision.

“Remember the Central Park Five? Liu was the only one who stood up there with Rev. Sharpton. The only person who stuck with those boys when everyone thought they were guilty.  He never let them down.  We can’t let him down, either.  If you can give millions to some of these politicians who don’t deserve it, and not to these boys… and not to John Liu, then something’s very wrong.”

To Ms. Brown and the 2,000 folks at Von King Park yesterday evening, the hundreds who rallied on Monday in the canyon of Rector Street just off the West Side Highway in lower Manhattan, the dozens of nonmedia observers in the hearing room, and the “average” thousands who have not been polled, there’s a real big difference between Comptroller Liu and the other mayoral hopefuls; they know him.  He’s been out there walking the beat in the city’s diverse neighborhoods: not for a day, nor a month, but for years.  He shows up.

The last time we saw him before the Monday (5) rally on Rector, was at the June 3 transition ceremonies for community education activist Jitu Weusi at Brown Memorial Church in Clinton Hill.  He sat respectfully for the duration of the services near his colleagues NYS Sen. Velmanette Montgomery, NYS Assemblywoman Annette Robinson and Sen. Bill Perkins.

Between then and now, Liu has traversed the city, many, many times, following a broad roadmap of diverse, multicultural events, ceremonies, meetings, appearances and more. Where the people live, on trails possibly unfamiliar to polling data samplers.

So the CFB “verdict” notwithstanding, Comptroller Liu counts big time in various communities.  Big enough for them to call him “Mayor,” five weeks before the Primary.