The Negro Building and Exhibit at the Jamestown Exposition

By Helen A. Tucker
Charities and the Commons 18 (Sept. 21, 1907)
No one could look at the product of Negro brain and hand in the Negro Building at the Jamestown Exposition without realizing what a remarkable showing has been made after forty year’s effort, not only indicative of accomplishment, but full of promise. At one entrance to the Negro Building, by the side of the path, is a small, windowless log cabin, the slave home of 1860; on the other a pleasant wooden cottage, typical of many which are sheltering Negro families today. In Virginia alone, 47,000 homes are owned by Negroes.
The Negro Building is an attractive, well-proportioned, two-story structure, on classic lines, admirably adapted by its many windows to its purpose. It was designed by a young Negro architect of Washington, D. C., W. Sidney Pittman, a graduate of Tuskegee and Drexel Institutes, who has also designed some of the Tuskegee buildings. The contract for the building, together with the incidental contracts, were taken by Negro contractors. Colored mechanics and laborers did the actual work of construction. Even the timber was supplied by a Negro firm. All financial and business matters, including the collection and setting up of the exhibits, were in the hands of an executive committee consisting of three Negroes appointed by the United States Government to supervise the expenditure of the $100,000 congressional appropriation. The building, with the decorations and electric lights, cost about $50,000, and on the day of formal opening the chairman of the committee, Thos. J Calloway, was able to announce that with all expenses met and every debt paid they still had $30,000 left. This speaks well for Negro business ability. 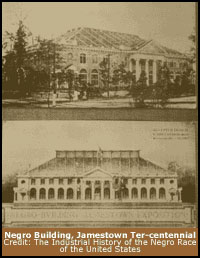 In the early days of planning for the Negro exhibit, there was a feeling among some colored people that to have an exclusively Negro building at the exposition would be of  “Jim Crowism,” but the more thoughtful and discerning realized the truth that the credit for anything they might show in the general exhibits would be largely lost to them. As one of the Negro day speakers said, it would have been necessary to have some- one standing by each article to swear it was made by a Negro and ten more to swear they would believe the witness on oath.
Inside the Negro Building the contents of the building might be classified under the following heads: educational, agricultural, business enterprises, inventions, literary and artistic exhibits. In all, about 3,000 exhibitors are represented. As might be expected, since it is by education that the foundation for all further progress must be laid, a large number of schools, some one hundred and twenty-five, conducted by and for the race, have a prominent place.
These, including both public and private institutions, represent many states and kinds of training – one may turn from the work of a kindergarten in Topeka, Kansas, to that of a normal school in Lexington, Kentucky. From the nature of their work, the industrial schools can make the most striking showing, and there is plenty of evidence in the fine needlework done by the girls, and in the productions of embryo blacksmiths, wheelwrights and carpenters, that the training of the hand is not being neglected.
Hampton Institute has a particularly extensive, interesting and artistically arranged exhibit, illustrating what is done in the various departments of this great school, which is really an industrial village. Here, the furniture made by the students, the rugs woven by them, the handsome, substantial wagon, the well-made harness; the neat, attractive brick fireplace, are their own demonstrations of the value of industrial training and the power to do something well – and they speak also of the trained mind, lacking which such accurate and painstaking work would be impossible.
As a part of the exhibit of Fisk University, the jubilee singers give free concerts, morning and