Strength in Numbers: Broadway Triangle and Bedford Union Armory Protest and Band Together to Fight for Affordable Housing in Brooklyn

The room was small but their voices were many at Brooklyn Borough Hall Monday as hundreds of local residents and advocates banded together to fight for affordable housing and against displacement across Brooklyn.

“Fight! Fight! Fight! Housing is a Right!” rang out through the halls of The People’s House and echoed into the street.

The meeting was going as planned until the announcement of the second item on the docket, the Pfizer site rezoning, at which point Juan Ramos, Chair of the Broadway Triangle Coalition, stood in protest of the submission presented by The Rabsky Group.

Ramos forced the meeting to an abrupt close, refusing to silence himself and claiming the Broadway Triangle rezoning plan serves to discriminate and push out the local Black and Latino communities of South Williamsburg.

“On behalf of the hundreds of people who came out today to this gathering, we firmly object to this meeting even taking place because we feel that this plan went through our community in a way that was unfair to our community, and the way the community saw no plan at the community board meeting. We firmly oppose the development at the Pfizer site and the Bedford Union Armory. Both of which stand to displace thousands of long-term community members,” said Ramos.

Other protestors within the community room then joined in chanting “El pueblo unido, jamas sera vencido”, or “the people united will never be defeated”, as peace officers started forcing protestors out of the chambers.

City Council member Antonio Reynoso(D) stood united with the protestors and supported the actions of Ramos at the meeting.

“They made the decision to shut this [public hearing down] and it looks like they did shut it down. We had over 400 people from just Community Board 1 here fighting the Pfizer site [rezoning plan] who took time out of their day to volunteer and be out here marching and fighting. Do 400 voices like that have any value? We will see through this process. I work on behalf of the constituents of my district and if they decided that shutting down the meeting was the best thing to do, then that’s the right thing to do,” said Reynoso.

Reynoso went on to note the lack of diversity in Community Board 1, claiming that the board isn’t “demographically representative of the community” of South Williamsburg. On June 21, CB 1 issued a recommendation of approval for the Pfizer rezoning plan with conditions. Reynoso’s district doesn’t include the Pfizer site but he has been a staunch opponent of the proposed plan, committing himself to blocking the project on the grounds of its lack of community input and affordable housing units.

The Rabsky Group, who were set to make a detailed presentation to the Borough President’s Office, were blocked in their efforts for the evening. However, they are still committed to the project and believe it is in the community’s benefit to move forward with their plan.

“While we are disappointed that a small group of people insists on stifling public discourse, we will encourage key decision-makers to follow the lead of those closest to the site – the Community Board – which voted overwhelmingly to support this plan. We will continue to make the case that this project, which will create 287 new affordable apartments, and create well-paying jobs and open space, is right for the long-vacant site,” said Tom Corsillo, spokesperson for The Rabsky Group, the developer of the Broadway Triangle Project. 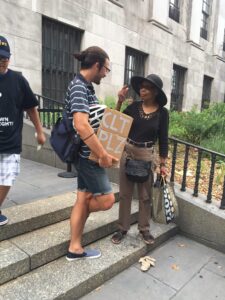 For the protestors, the early close to the meeting was a small victory in a bigger battle for the vacant lot. The project has been a contentious issue for local officials and community advocates, who have been fighting over the site for nearly a decade. Community members, citing discrimination issues, sued the city for an earlier 2009 rezoning plan they claim favored the Hasidic community over Blacks and Latinos. The case has yet to be resolved in the State Supreme Court and is in ongoing negotiations.

Shekar Krishnan, the lead attorney in the case, praised the united front presented by the Broadway Triangle Community Coalition and other local residents and advocates.

“This was the community making their voice heard: about how we will not accept, at all, these discriminatory housing plans being pushed through that will only exacerbate residential segregation in an area that has been segregated for far too long.”

Krishnan continued, “The city cannot approve a rezoning like this because it is then culpable also in violating fair housing laws, in perpetuating this pattern of housing discrimination in the Broadway Triangle. Our community is not going to accept a plan like that where, truthfully, there was no plan for this area and what was produced will only force out more residents of color in one of the most heavily gentrified neighborhoods in New York City,” said Krishnan of Brooklyn Legal Services, Corporation A.

The plan, located on a two-block section site between Harrison and Union Avenues, from Walton Street to Gerry Street, and will include 1,146 mixed-income residential units, 65,000 square feet of neighborhood retail, a half-acre of public open space and 405 parking spaces.

Though the protestors against the Bedford Union Armory redevelopment project weren’t able to make their voices heard within the chamber, they did join in with the Broadway Triangle Coalition to demand the “deal be killed” and lent their numbers to the cause.

United on the steps of Brooklyn Borough Hall before the meeting both groups chanted together, “If we don’t get it, shut it down!” and shared in their plight for affordable housing.

“They got a developer in Williamsburg in the Broadway Triangle called Rabsky. You know what I call them, ‘Rob-sky!’ You know why, because they are trying to rob you and me! Robbing us of our home! Robbing us of our jobs! Segregating us! Injuring us! Displacing us! These guys are as bad as BFC!,” said Bertha Lewis, affordable housing advocate and founder of The Black Institute.

Lewis went on to state, “We want to show that our coalition is growing and that more and more groups are coming on. We also want to send a message to other groups around the city. Brooklyn is ground zero and if they can do it to us, they will do it to you”.

Adams will be expected to make a recommendation for approval or denial within the coming weeks for both the Pfizer site rezoning and the Bedford Union Armory. In the past, Adams has already stated his lack of support for the Bedford Union Armory deal but will be expected to make a formal recommendation during the ULURP process.

After Adams, both plans will move onto the City Planning Commission and then to the City Council for a final vote.