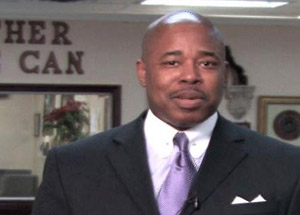 Flanked by the diversity of the Brooklyn Democratic machine, Eric Adams declared his candidacy for Borough President under a crisp, clear sky. “This is a pivotal moment for Brooklyn. We have to turn our popularity into prosperity and leave no one behind,” Adams told the crowd of supporters. “After three decades as a police officer, community organizer and elected representative in this beautiful borough, I have the experience to be Brooklyn’s strongest advocate and the passion to be a champion for every Brooklynite who needs help, wants a better life, and strives to make Brooklyn the best it can be.”

Local elected officials offered their own anecdotes demonstrating their confidence in an Adams Borough Presidency.

“I want you to know that I refer to Senator Adams as ‘Senator Po-Po.’ It’s my way of constantly reminding him and myself where he came from,” said State Senator Velmanette Montgomery, “We gain a voice that we can trust, a voice that we can be proud of.”

“I remember Eric Adams when the police officers had taken a sergeant’s test and they said the Black officers had cheated. [Adams and fellow officers] came down and around City Hall and said ‘Black officers don’t cheat,’” said Assemblywoman Annette Robinson. “He stood up then, and he stood up for other issues within and around the community.”

“When you look at the issues that matter to people, he’s always in the right place,” State Senator Kevin Parker said. “He has been in the forefront of the argument about minimum wage. On stop-and-frisk, his leadership has guided us through that issue. Eric had legislation banning assault weapons three years ago, and was in the forefront on women’s reproductive health rights, the economy in our communities, and the image of our young people.”

Adams has stood for various constituencies across the city on a broad range of issues from term limits and foreclosure to gas price gouging and preeclampsia (a medical condition that impacts pregnant women). Adams hosts an annual commemoration for fallen NYPD Officer Russel Timoshenko.

When Yoseph Robinson — a former hip hop executive who had converted to Orthodox Judaism — was killed in a liquor store robbery, Adams was there to provide emotional and material support to his family and community. Aware of the negative impact on officers and community, Adams crafted legislation to address NYPD ticket and summons quotas.

Eric Adams’ advocacy began long before he was elected to the State Senate. As he moved up the ranks from beat cop to NYPD Captain, Adams engaged in commensurate community activism by founding 100 Blacks in Law Enforcement Who Care.

“When we were the most provocative, the most meaningful, and the most potent during that time before Eric went into politics, most of us were clear that we wanted Eric to go as far as he can go,” said Marc Claxton of the Black Law Enforcement Alliance, one of the early members invited to join 100 Blacks by Adams.

“I am very proud of him. We wish him nothing but the best.”

Claxton recalled that among the most substantive things they did during Eric Adams’ direct tenure with 100 Blacks were “hundreds and hundreds” of community workshops on what to do when stopped by police, senior safety and domestic violence.

“We did anti-bullying before bullying was even a subject in this city,” said Claxton.
Every month 100 Blacks gave $1,000 to organizations and individuals in the city under Adams stewardship.

“We identified groups, such as Bed-Stuy Ambulance Corp.,” said Claxton. “That was Eric’s initiative. We did this for many, many years and that was during the time that Eric was spokesperson at the helm.”
Under Adams’ leadership, 100 Blacks engaged in public policy issues on policing and police/community relations. They testified before city and state hearings. They filed formal complaints with federal agencies over civil rights violations.

“All the stop-and-frisk that nowadays people seem concerned about,” said Claxton, “we talked about it 15 years ago.”

“We provided a lot of information and access. We went on the record and spoke the truth when a journalist or council person or senator called and said ‘I need to understand this particular policy. What’s the truth behind it?’ said Claxton.

Claxton said he “learned a lot about the dynamics of this city and different groups from Eric.” Under Adams, 100 Blacks would meet with diverse groups to discuss tense issues,” said Claxton.
“People understood if he disagreed with you, he’s going to tell you he disagrees with you. But, he still maintained respectful relationships with different people.”

Claxton added, “People don’t understand that he had and has established long-time relationships in a whole lot of different communities.

Nearly 2,500 people have already contributed to Adams’s campaign to become Brooklyn’s next Borough President—bringing his fundraising total of mostly small-dollar donations to about $420,000 as of the last filing on January 15.