It’s young, it’s vibrant, it’s alive, it’s a silent movement that’s about to break out..  According to UrbanWorld award-winning playwright Darius Clark Monroe, Bedford Stuyvesant is the center of the film and arts movement, a Sundance East on the rise.  And while some of us have been pate to the underground party, of sorts, Restoration’s plugged in to this neighborhood’s cultural movements with its annual Bed-Stuy Alive! October initiatives which extend to celebrations of entrepreneurism, achievement, culture partnerships and collaborations.  The emphasis is on healthy values and healthy vibes.  And interview with writer/vocalist  Chrisette Michele who performs Saturday in the Restoration Rocks! Segment of Alive! appears on Page 10.  And an interview with the equally phenomenal poet/writer/actor Saul Williams is below.  A few years back, Saul put to rest the lie that everyone can be a writer as he performed  all over Bed-Stuy, including Bed-Stuy West’s Moon Café,  where he earned high snaps and fives as artist-in-residence.  Thanks to Bed-Stuy’s Carlton Brown, an owner of MIST Harlem, and Brooklynite Michelle Materre of Creatively Speaking, Williams’ groundbreaking film TEY  enjoyed a record-breaking premier at the MH Cinema last Sunday.  TEY tells the story of a young man who is designated to die on a certain day, and how he faces life and death on that day.

Ms. Michele’s songs and satin voice have moved millions of people the OTP was honored that respectively Ms. Michele (Page 10) and Mr. Williams and his TEY director Alain Gomis (below) agreed to share their thoughts with our readers. Special thanks to Restoration, Bed-Stuy Alive!, Brownstoners and New York City residents who are keeping creativity and alive, well and in motion in Bed-Stuy and beyond.. 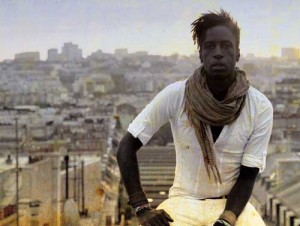 Satchi is on the altar of sacrifice. (But) what I like about the character is, he looks at ambition and his life – he’s supposed to get a job and send money home – and he chooses lifestyle over life choice of earning and ambition.  Being around the stuff he loves is important. Not money.

I relate to that, as an artist and as an actor.  I feel I have not been so overexposed to the “dream” to make me want to abandon values and mores.  At the end of the day, it’s just not as important as one might think it is.

I am interested in the fruit of labor, and what it brings out in me, and how it affects society at large.  Like Satchi.

A few years Saul’s stunning debut in the film SLAM made sonic waves throughout Brooklyn and beyond to even Hollywood.  With his exceptionally moving spoken words and on-stage presence.  Our Time Press was even moved to crown him “the wordsmith of Our Time.”  But as we surmised and he affirmed in the interview last week, Mr. Williams was looking out beyond the spotlight.  He left for Paris, not for an expatriate experience; he was looking for a nice large apartment that afforded him a good rent and one became available, there.   It was a quick choice, he admitted, but it was a turning-point decision that also gave him “the space to think of art and creativity on a higher plane,” a global platform, he said, beyond Hollywood.

The challenge for the artist in America is there’s not much government support.  In other places you do not necessarily have to conform to others’ vision to achieve your goals. I’ turned off by seeing so much of TV shift to these reality (shows) and roles that call for an actor to play doctor, lawyer or cop.  Not that France freed me, it’s that I freed myself from the paradigm: I could have gone anywhere.  What’s important is that I went somewhere, somewhere outside of that box.  I didn’t feel like I was dying because my agent didn’t call me; my career wasn’t over because I was not able to attend what’s happening in LA or Oakland, or to make appearances and be seen on the Network.  To me it’s more important to be seen when there’s something real to show.  No offence to people who dream or come from that generation of people who like everytime there was an opportunity to be on television, took it because it was ‘meaningful.’

My father was a prominent minister who came out of Brownsville, who worked with Dr. King and Rev. Wyatt Tee Walker, but he eventually chose to go to a small community upstate Newburgh, New York because the people needed him.  My parents were fully invested in that move and that work, and in seeing that something could grow from it.

I was familiar with the grits and glam of the preacher’s world; there is such a thing as being “called” in a high end church.  You can choose the church you want to pastor in.  But at the end of the day, my parents valued the arts and artists.  I grew up in the midst of artists like Odetta and Pete Seeger, actors like Arthur French, and people committed to all forms of storytelling who were committed to their world.  And that level of commitment was valuable in their world.  This all easily transferred over to my (interest) in groups like Public Enemy who were more focused on their communities.

On a profound level, that phrase doesn’t belong to the Christian bible.  It belongs to every standardized spiritual text.  The same thing is said in some form or logo. The Word is the control of the sacred breath: Once we were able to shape sounds into words, we were able to express our gratitude for being alive.

In TEY, Williams’ character speaks few words.  We learned that director Alain Gomis wrote the part with the never-speechless Saul in mind.

There was a soul connection based on the face that he wrote the character for me. There was a connection in my spontaneous move to Paris, and how once there I learned there was a director who wrote a film for me, and had a green light on the project.  Up to this point, I was thought of as an actor who could play homeless, crazy guys.  I eventually learned to approach me, and tell me the story of how (Alain) had used a photograph of me to write TEY.  It was surreal because there’s a lot of description of what we see through Satchi’s eyes. And I felt a connection … I’ve always been interested finding great acting work, and this is on that level. The challenge: it didn’t require much speaking.

When SLAM came out Saul was already a dad.  In fact his early poetry, heard in SLAM, was inspired by his daughter, now 17.  His son was born a year later.

Actually all of my writing is reflective of the fact that I was a new dad.  The stuff I’m known for came right after I became a dad, and it was all messages I was trying to send my send to my kids for their future selves: something to lean on, something to read, something that would feed them in some way.  I wanted to give them something toxic-free that they could sing along with.

It seems so easy to sit down and say to a child, “This is how you tie your shoe.”   Yet, I wanted to give them greater life lessons; I wanted to document what I was learning as I was learning with them. You hear me reference Saturn – referring to my daughter – who was born with I was 25.  I felt we could learn together.  I was not this maestro – knowing everything – bringing up a child.

Most important thing to know about parenting is that you’re not always in a position to know it all.  I do know (the parent and the child together) can work through to results.And, too, my kids are not me.  They don’t have my upbringing or any of the same types of interests as me.  Even though they are into music, writing, painting, they still are their own selves.  When I encounter them and what they think is cool… I’m forced to be in a position of having to learn from them, to learn how to go with it.

I am not a fan of that over-concerned helicopter parenting. My parents never read books to see where I would go to college. Prevalent in America?  Not my style.  Most of these parenting techniques do not result in better kids; they create culturally indoctrinated kids who start drinking at 16.  I am learning WITH my children.

We asked Saul about his thoughts on films as “entertainment”?

We have to get away from this idea of entertainment as nothing but escape and humor.  An entertaining film offers a key into another reality, a reality that exists but is not necessarily ours. Good filmmaking, to me, is a simple beautiful story that is full of amazing detail that gives us a chance to look at a reality outside of the world we exist in.   To see a street, a space, a home on a very simple plain level that you would never have imagined.  Nice to go to a restaurant but nicer to be invited to someone’s home. An interesting, entertaining film offers a key into another reality that exists outside our own.  Also, there’s lots of entertainment to be found in simplicity.

Contemplating the choices offered Satchi –champagnes, limos, ideas of what he could do facing his last day on earth, nice to see someone making simple choices.  Yes, there’s a lot of lot of entertainment to be found in simplicity… if people can find it.  Going to a museum and learning how to look at paintings (is an example). One can ask, “What the hell are you looking at?” But it’s deeper than just looking. You’re paying attention to details: stroke, detail, light, color, meaning.  A film is not just a story, it is how it is shot how, it captures emotion, the sounds, the landscape.  And it’s all present in this beautiful film.

TEY, which was a smash in its U.S. premier at MIST Harlem, last Sunday, according to Michelle Materre who directs the Creatively Speaking series at the Cinema, runs daily through this Sunday, October 13. See local listings and MIST Harlem website for times.

Publisher’s note: On the day we interviewed both Mr. Williams and TEY’s French-Senegalese director Alain Gomis, the U.S. government shut down.  We asked Mr. Gomis if he would like to share his thoughts with our readers:  “Yeah,” he laughed, “Welcome to the African life ….”   So now the series adds a Part III which appears next week with Mr. Gomis speaking.  (Bernice Elizabeth Green)