With the belief that an informed constituency is an engaged constituency, St. Senator Zelnor Myrie (D-20th SD) held the first of three town halls on Saturday, May 4, 2019 at St. Francis De Sales School for the Deaf, located on Eastern Parkway. The topic was the annual New York State budget process; the goal to explain the budgetary process which funds various state offices and agencies in understandable terms so that people will be interested and able to engage in this process.

Financing state operations involves the Governor, the state Senate and the state Assembly. Each unit will develop a budget package and later wrangle about the final numbers. Myrie wanted attendees to understand the power that Governor Cuomo has in this operation. The Governor’s Office prepares a budget separate from what the Senate and Assembly puts together. The state Senate and state Assembly will hold hearings on different parts of the budget, which usually are capital projects and services. This process occurs between January 1st and April 1st each year.

April 1st is the day to vote on the budget–just one budget. Therefore, there is much negotiating occurring days and nights leading up to April 1st. Add to this, the Governor can attach non- budgetary items onto this multibillion-dollar plan. For example, policy items such as congestion pricing and banning plastic bags are in this year’s budget.

The 2019 state budget is $168 billion, of which a significant amount was allocated for health care and education. Myrie explained, “This year’s budget features such criminal justice reforms as eliminating cash bail, effecting speedy trials and discovery laws which ensures the presentation of substantive evidence.”

He went on to say, “Other reforms involve early voting, online voter registration and e-poll books. Further, establishing early polling sites has been bandied about and has been met with approval by the NYC Board of Elections that would manage sites and the City of New York is willing to cover the cost. The budget includes funding for the New York State DREAM Act, which gives stability or definition to young adults termed “Dreamers.” 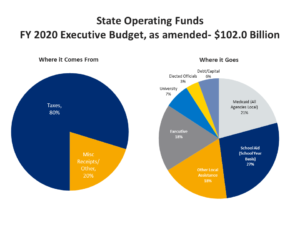 If it takes three months to determine how much money each program and office requires to operate effectively seems daunting, one’s perception is realistic. Myrie contends more time is required to read and examine all of the budget bills. However, there is the concept of “message of necessity” that doesn’t permit “the budget to age.”

Other good news coming out of the budget includes an additional $500 million designated for people with disabilities and the passing of the Homeless Stability Act, which addresses New York’s homelessness epidemic. There are approximately 93,000 homeless people in New York State, of which 63,000 are concentrated in the five boroughs.

Another sticking point for the Empire State is segregation within the City of New York’s public-school system. Depending on the neighborhood and the racial and ethnic composition, certain programs and learning tools are not available. Further, this reporter was informed by a young female African-American student attending the college fair held in April at Brooklyn Technical High School, that some Asian-American students are in the habit of referring to their African-American classmates as the “N” word.

Closing the town hall on positive notes, St. Senator Myrie said the Governor signed the executive order making it possible for ex-convicted individuals to regain their voting rights. This legislation was put together by St. Senator Comrie and garnered support from many other senators. An attendee of the meeting asked, “How can an average New Yorker have a say in New York State politics.” Myrie’s response was, “By e-mailing, calling and most importantly, handwritten letters to the elected officials that explains what you want.”