So how do we understand the paradox of black officials perpetuating a system that largely disadvantages black people?

LOCKING UP OUR OWN

The past few years have seen an increase in awareness and outrage over the senseless killings of black men and women at the hands of law enforcement, and these deaths have also led to a renewed conversation about race in America’s criminal justice system.

It’s a given in this country that race plays a major role in that system, with black people more likely than white people to be arrested for minor crimes, to be dealt harsher sentences, and to be more unfairly impacted by their criminal records. Yet the criminal justice system is also staffed by thousands of black police officers, judges, corrections officers, and prosecutors.

So how do we understand the paradox of black officials perpetuating a system that largely disadvantages black people?

In Locking Up Our Own: Crime and Punishment in Black America, Yale Law School professor and former D.C. public defender James Forman, Jr. examines the fascinating and tragic historical roots of the war on crime, and the role that African Americans played in its escalation.

Using Washington, D.C., a largely African American city, as a window into America’s response on crime, Forman shows how tougher laws and harsher responses were proposed by the nation’s first black mayors, police chiefs, and city council members. These individuals came to power at a historic moment when poverty, crime, drug addiction, and violence were on the increase, and their stringent law-and-order tactics were seen as necessary to protect and heal these communities. In heartbreaking detail, Locking Up Our Own shows how the black community struggled to respond to rising crime, wrestling with dilemmas that remain pertinent today.

It also reveals how incremental steps taken in the name of the civil rights movement gradually eroded the rights and opportunities of the very people they were meant to help.

As a former clerk for Justice Sandra Day O’Connor and a firsthand witness to D.C.’s draconian criminal justice system during his six years as a public defender, Forman is a terrific and humane guide through the thorny topics presented in his book. Locking Up Our Own is a timely and essential work that begs to be read by anyone who craves a way forward at a time when solutions seem rare and out of reach.

James Forman Jr. is a professor of law at Yale Law School. He has written for The New York Times, The Atlantic, numerous law reviews, and other publications. A former clerk for Justice Sandra Day O’Connor, he spent six years as a public defender in Washington, D.C., where he cofounded the Maya Angelou Public Charter School. 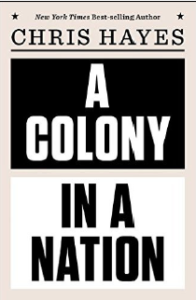 Standing-Room Only at “Truth to Power” Journalist Chris Hayes’ book-signing: Not a Surprise.

This household starts and closes the weekdays with the MSNBC news family. So, of course, we were in the audience when veteran journalist Chris Hayes discussed his searing new book, “A Colony in a Nation,” last Saturday at St. Joseph’s College in Clinton Hill. Hayes has covered shootings throughout the U.S. Of course, we agreed when he told the crowd that when thousands of people all across America are saying the same thing, there’s got to be some truth in it. But he doesn’t leave the rest of America off the hook: he indicated that racial inequality hasn’t improved over the past 40 years, and all of us – black and white – has a responsibility to work towards a solution that’s not outside of us. Following is information on the latest work , A Colony in a Nation, by this New York Times best-selling author and Emmy Award winning news anchor. Our Take: It’s A Must-Read.

America likes to tell itself that it inhabits a postracial world, yet nearly every empirical measure―wealth, unemployment, incarceration, school segregation―reveals that racial inequality has barely improved since 1968, when Richard Nixon became our first “law and order” president.

With the clarity and originality that distinguished his prescient bestseller, Twilight of the Elites, Chris Hayes upends our national conversation on policing and democracy in a book of wide-ranging historical, social, and political analysis.

Hayes contends our country has fractured in two: the Colony and the Nation. In the Nation, we venerate the law. In the Colony, we obsess over order, fear trumps civil rights, and aggressive policing resembles occupation. A Colony in a Nation explains how a country founded on justice now looks like something uncomfortably close to a police state. How and why did Americans build a system where conditions in Ferguson and West Baltimore mirror those that sparked the American Revolution?

A Colony in a Nation examines the surge in crime that began in the 1960s and peaked in the 1990s, and the unprecedented decline that followed. Drawing on close-hand reporting at flashpoints of racial conflict, as well as deeply personal experiences with policing, Hayes explores cultural touchstones, from the influential “broken windows” theory to the “squeegee men” of late-1980s Manhattan, to show how fear causes us to make dangerous and unfortunate choices, both in our society and at the personal level. With great empathy, he seeks to understand the challenges of policing communities haunted by the omnipresent threat of guns. Most important, he shows that a more democratic and sympathetic justice system already exists―in a place we least suspect.