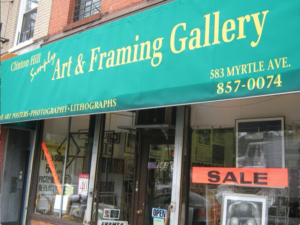 In transitioning urban Brooklyn neighborhoods where residents and local merchant businesses are in a state of constant change and closure, few remaining specialty businesses become a neighborhood fixture and remain iconic amidst aggressive urban development.

In celebrating over two decades overcoming neighborhood boundaries and barriers in a rapidly changing Brooklyn neighborhood L.B. Brown says the one constant is Information—from services to neighborhood history. “We continue to garner new customer bases that cross all demographic profiles. Our customers definitely don’t let the demarcation of neighborhood politics limit their patronage.”

During the yearlong 25th Anniversary Celebration, Clinton Hill Simply Art & Framing Gallery has quietly given to all customers Thank–You gifts, unadvertised discounts and monthly one–day–only sales on the 25th of the month including walk-ins receiving an anniversary gift until December 2016.

Brown says since 2001, residential picture framing and design services began to overtake art sales. Starting February 2017, she will revive her arts mission to promote photography as an art form. Starting with a Black History exhibit, “Snapshots from Cuba”, featuring curated photos from her private collection for public viewing.

For Spring 2017, she will relaunch her educational series featuring Consumer Talks/Demos for the exhibiting artist and residential buyers. She is working on a book—“Guns, Gangs and Gentrification”–about her entrepreneurial experience.

As a female executive at Ebony magazine, with a passion for collecting black art, she recognized a growing trend in the 80’s among middle class and upscale black consumers, then a relatively underserved and underdeveloped art–buying base. As a Clinton Hill resident in the 80’s, she combined her passion with entrepreneurial skills and took a chance on her neighborhood.

Brown says, “A tree can grow in Brownstone Brooklyn”.