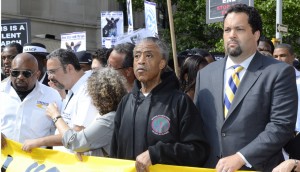 They marched down Manhattan’s 5th Avenue in silence: Black, white, and Hispanic; Christians, Muslims, and Jews; Asians, Africans, and South Americans; Straight and Gay; the able-bodied and disabled with canes and in wheelchairs, students, workers, and the retired, New Yorkers and out-of-towners. The Father’s Day Silent March against Stop-and-Frisk led by Rev. Al Sharpton and NAACP’s Benjamin Jealous stretched 20 blocks.

Organized by the National Action Network and the NAACP, the Silent March was supported by more than 200 groups. Local parents were overheard explaining to their young children n why the march was in their neighborhood.

Council member Letitia James said she was marching in silence “to send a strong message. The message will be heard from here to City Hall, to Albany, to Washington that you have to respect the rights of all individuals. Stopping-and-frisking individuals solely based on the color of their skin and their age and their apparel is unconstitutional and illegal. We can do better than that as a society. I am marching for that and for this little boy so that he will not be viewed as a suspect.

Assemblyman Hakeem Jeffries, candidate for the 8th Congressional Democratic Primary: “The NYPD stop-and-frisk practices have been completely out-of-control for the last 10 years. Hundreds of thousands of individuals stopped, questioned, frisked, embarrassed, humiliated, and in some instances dehumanized each and every years in violation of the 4th Amendment. It is important for the city to come together — people of all races, African Americans, whites, Latinos – to say enough is enough. The 4th Amendment should be respected. We can’t keep needlessly criminalizing innocent, law-abiding young people, particularly in communities of color.”

Assemblyman Nick Perry said he attended to “express my concern about the abusive use of stop-and-frisk and the violation of civil rights of hundreds of thousands of New Yorkers of African American and Latino descent.”

State Senator Bill Perkins said “I am silent in this silent march in support of ending stop-and-frisk. We have a substantial amount of legislation in the Senate and Assembly that we are looking forward to seeing some of it happen hopefully before the end of the session. But, if not, it makes a wonderful statement about where we are coming from in terms of the racism and the profiling. We need to stop the stop-and-frisk.”

State Senator Kevin Parker: “We don’t think it should be a crime to be Black and Latino just walking the streets of New York City, or anyplace. It doesn’t make us any safer. It doesn’t do anything to improve the city. We are here in support of a movement that says that the abuses of stop-and-frisk should end now. There are a number of pieces of legislation pending, including one that I authored with Assemblyman Karim Camara that would create an Inspector General of the NYPD to create oversight of the NYPD. Right now, the question is ‘Who is watching the watchers?’ The answer right now is, ‘No one.’ That, along with some other legislation would make some of the abuses we are seeing with stop-and-frisk illegal. We want to see those bills come to the floor before the end of the session.”

Councilman Mathieu Eugene: “It is important for all of us – elected officials, community leaders, and citywide advocates – to come together. When you look at the numbers, the number of Black and Latino young people who are stopped-and-frisked, you can see there is a problem that should be fixed. Young Black people have the right to go anywhere they want to go. We don’t want young people to feel they don’t have the right to do what they have to do. I think this march is a peaceful to bring justice and to ensure the police officers can do their jobs but also respect the rights of other people.”

State Senator Montgomery: “I am overwhelmed. I am so impressed with elected officials here, labor here, citizens here. It’s the most dramatic statement I have ever seen around a single issue. What happens when police are in communities, particularly communities of color, and how they treat people? This one drastic tactic — stopping-and-frisking people for no apparent reason – does not add to the safety of our neighborhoods. It makes us more hostile, angry with the police department. It doesn’t help. It hurts policing and it hurts young people. This is an important thing to do today. I am happy to see the thousands and thousands of people who are here participating.”

Bill Thompson, 2013 mayoral candidate and former NYC Comptroller said, “This is what is happening in the City of New York: We have 700,000 young men and women who are being stopped purely because of what they look like and their color. There is something wrong with that. I am here to send a message that we need to end stop-and-frisk in NY as we know it right now. This is not effective policing. This is bad policing. I am here with tens of thousands of other people to say this needs to change and change now.”

Councilmember I have been extremely vocal against this policy. It is a violation of our civil liberties and our civil rights. It’s our duty to be here to stand up for our constituents and everyone in the City of New York. This is not the way we want to go – criminalizing generations of young people and entire neighborhoods. This is not safe policing and it is a violation of our rights.

Bill DeBlasio, NYC Public Advocate: “We have to reform stop-and-frisk. Too many of our young people are having negative interactions with police. That is not what we need. We need respect between police and community. We need safety based upon that partnership between police and community. We’ve gotten to 800,000 stops a year. It’s too high on any measure of what will make us safe.”

Daniel Squadron: The way stop-and frisk is going, it creates a divide in the city. For certain people, especially Black and Latino men, their relationship with the police is totally different than with the rest of the city. We are creating criminals of kids. This affects my district, too. I represent a very diverse district. This affects the entire city. It’s a question of conscience.”

District Leader Robert Cornegy: “I decided to participate not only for my own blood children, but for all the children of Bedford Stuyvesant and central Brooklyn who needed someone to advocate for them. It is imperative to be our here to be a voice of advocacy for young people who are marginalized, especially in communities of color.

L. Joy Williams, 1st VP of the Brooklyn NAACP said, “I am marching in support against stop-and-frisk that NYPD is using in our communities obviously more than in any other community. The notion that we should just accept the attack on our dignity and our human rights, and be treated as criminals is despicable. I am here to stand up for our rights as human beings and our dignity.

Rev. Taharka Robinson came to the march to call for a “stop of racial profiling in our communities. There are too many young Black men who are stopped-and-frisked all over the city. The process needs to end.”

Community activist Burchell Marcus said, “It’s completely racist, immoral, and unjust to our community. It is as if they are saying to the community that what they are doing is right when the constitution clearly states you cannot violate the inalienable rights of people. We are here to make sure that Bloomberg gets the message that the illegal practices he is condoning by the police dept. must stop.”