SHE BRINGS IT HOME!

Hundreds from all over Brooklyn and beyond joined the Reverend Anthony Trufant and church congregants in exalting James as the first African-American and the first woman to be elected Attorney General of New York State. The church also was abuzz in reaction to the rare coming together at the event of elected officials, community leaders, members of the law community and the esteemed hierarchy of Central Brooklyn.

Rev. Trufant, shepherd of the Emmanuel Baptist Church congregation effortlessly injected levity into the proceedings by approaching the pulpit whenever speakers became long-winded. Flanked by Speaker of the Council and acting Public Advocate Corey Johnson and the Queen of Central Brooklyn Politics, the Honorable Annette Robinson, James was glowing as one by one, her closest colleagues and friends spoke with love and admiration of the girl from Brooklyn that has reached to the height of Attorney General by speaking truth to power.

The event was hosted by District Leader Olanike Alabi, an Emmanuel congregant, and City Council Majority Leader Laurie Cumbo, who wowed the audience with her boisterous energy, a fabulous pair of knee-high red boots and her toddler son, Prince.

Borough President Eric Adams spoke of James as a person who has “calmed the waters” of city politics. He spoke, tongue-in-cheek, about deferring to James in potential head-to-head campaign battles at every chance, proclaiming, “I’m not running against Tish!” — an ironic admission given the fact that had the Attorney General position not opened as a result of former AG Eric Schneiderman’s resignation, James might have considered a mayoral run, the race Adams reportedly is strongly contemplating.

Speaker Johnson read aloud the note that James left for him when he became Acting Public Advocate, explaining, “We have an Attorney General that is going to stand up for everyone. That’s who she is. It is at the core of her being.” 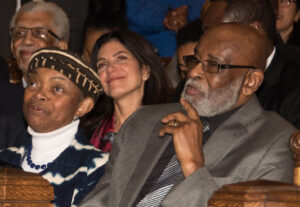 Born and raised in Brooklyn, where she attended public schools, James began her law career as a Public Defender. During her three decades she has always given credit to her church and those mentors in politics who inspired her along her journey.

So, it was an emotional moment for the Emmanuel Baptist Church family and guests when “The Queen” and “The Dean” of Central Brooklyn Politics took the stage together to praise their heiress. The Honorable Annette Robinson explained to the crowd that as Attorney General, James may need to face decisions the community may not enjoy, but she reassured that James will always rise to “the side of right.” She then presented James with a mantle made in Ghana, a shawl designed to protect her from evil.

The Honorable Dr. Al Vann spoke next, adorning James with his memories of her growth and development in the political arena, all the while displaying his sharp, matchless wit and long, acute memory of the people and events that shaped Central Brooklyn over the past six decades.

After a video presentation of her historic January 1 swearing-in in Albany, NY at which Rev. Trufant held the Bible, Letitia James took the stage, stunning and regal in a cherry-red dress. She spoke slowly and deliberately, thanking her pastor whom she lovingly referenced as the “timekeeper” and thanking every speaker for their words of faith, love and encouragement.

Speaking for 17 minutes, Attorney General James revealed some of the issues she’s already tackling in her new role, including voter suppression, joining a coalition of attorney generals in a lawsuit against the federal government to block the allowable download of blueprints that would be used to produce 3D printings of untraceable guns and more.

Referencing the presidential speech scheduled for the same night, James stated, “And as this president takes to the television at 9 o’clock, let me say it loud and let me say it clear: Immigrants and refugees are welcomed here!”

She also spoke directly to community concerns of powerlessness in the hands of profiteers, corporations and the overall “corruption eating away at the bedrock of our society.”

After summarizing the position of Attorney General as “a steward of justice,” she proclaimed, “Under my watch, we take that power back!” and she vowed “to leave no stone unturned.” It was a worthy event for a worthy leader. And a worthy reason to miss the president’s speech.

(All photos by Yaw Asare Aboagye_