Crown Heights is a well-known neighborhood in Brooklyn, NY, and is a host to many citizens in Brooklyn’s famous Bedford-Stuyvesant area. It could also potentially be a host for a new building from Cornell Realty, a property management company based in Brooklyn. However, there has been some concern and even backlash against this project from MTOPP (Movement To Protect People). The MTOPP is also not alone in this movement–there are members of the public who have concerns when it comes to their neighborhood. As a result, a public hearing was held at the school MS 61. 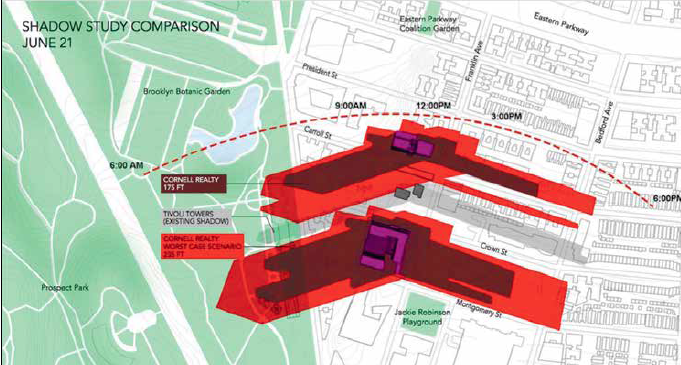 During the hearing, MTOPP handed out printed statements: “The Department of City Planning(DCP) has certified and approved the Cornell Realty application … This is viewed as a continuation of the racist policies of DCP to allow negative environmental consequences to occur in low- to moderate-income communities of color, whereas the more affluent white middle-class communities are afforded the opportunity to be kept informed and to mitigate(decrease) negative environmental impacts in their neighborhoods. The statement also said that Cornell Realty lied on their EAS and did not perform an analysis on waste and sewage. This all comes from a printout provided by MTOPP at the hearing. For context, shadow studies help developers become more aware of the city area/grid.”

However, Cornell Realty provided me with a statement of their own. “The need for mixed-income housing in Crown Heights is urgent, compelling and growing, and the plan to reactivate the underutilized Franklin Avenue properties will help meet it with nearly 150 income-targeted apartments. We appreciate the feedback we have received from the community so far and look forward to continuing this dialogue as the public review process unfolds.” This statement is from Tom Corsillo of Cornell Realty Management and was provided to me by representative Mike Johnston on the record. Johnston also stated that, “Experts have studied the environmental factors with shadows included and no significant factor was found.” According to Johnston, these experts were “purely objective and worked with city guidelines.”

I also had the opportunity to speak with Warren P. Berke of Community Board No. 9 who. has been on the board for five years. Berke stated that this was a “Public hearing directed by the City Charter to hear from the public.” No further comments were given due to this being a public meeting.

During the meeting statement assessments were provided. Andrea Johnson, a research director at TerreFrom, and Carlos Torres from Scalar Architecture, provided their own. “This shadow assessment has primarily been focused on open spaces… It is recommended that once the proposed development building form and envelope have been finalized, there can be an EAS… such as this one.”

Alicia Boyd, who is a prominent activist in the community said, “On EAS, Cornell decided they were going to lie on their EAS and then they were going to fabricate on the EAS… This gives us ground to challenge the EAS.” Boyd then continued her statement that followed with, “What are we asking with this challenge? We’re asking for Cornell Realty to go back to the table and come back and do an EAS…in Black communities, the city planning does not think Black communities are worthy of environmental impact statements but it constantly allows developers to come to our communities, then the development goes through… Now, when they go to white communities that’s something different; they say there is a negative impact so how are we going to mitigate that?”

Speaking with Ms. Boyd (one on one) and asking what is the end game overall, and she told me, “Stopping the project is the end game with the hope to do an EAS properly and lawfully. This will be done through political pressure. However, if worse comes to worse, a lawsuit is prepared called TRO (temporary restraining order). The goal is also to prove that [the developer] lied.”

At the adjourning of the meeting, no official statement was given. However, hopefully, the wait won’t be too long to figure out what will be happening within this community in Brooklyn.