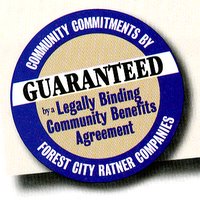 The following article regarding the Atlantic Yards Community Benefits Agreement was published by OTP in August 2005. We reprint it now to see what was promised to get community support, versus what has been achieved with two of the main signatories, the ACORN and BUILD organizations, no longer around.
There is the High School for Construction Trades, Engineering and Architecture, opened a year later some free tickets and use of a suite for the less popular events, and a call to NYCHA residents for possible jobs as “Concession Cashiers and Counter Servers,” who must be “able to work different shifts”.
The seeming difference between the promise and the reality is something to be examined as rezoning and development negotiations move forward across the city. DG

Rev. Sharpton, who has never backed a Ratner project, threw his support behind the developer because he believes, “This project gives the most to our community”. He went on to say that Extell, the developer behind the UNITY alternative, has not made as much of an effort to assess the needs of the Black community or engage its leaders. Sharpton believes that opponents of the FCRC proposal need to put aside their differences and consider what the CBA has to offer. “Only one of two people will win in this process. We can’t stand by and be outside with an attitude, unemployed, [with] no affordable housing while we have two rich guys arguing, one with a commitment to our people and the other who’s going to come in with an overnight do-it-yourself attitude,” says Sharpton.
Senator Velmanette Montgomery, one of the leading forces behind the UNITY alternative, says she is still analyzing the CBA and is particularly concerned with the enforceability of the agreement. However, the CBA does contain specific procedures, from mediation to litigation, if the developer breaches the agreement. Montgomery, who represents the district in which development is being built, says, “I feel compelled to be guided by my constituents and their sentiment is that issues of traffic impact, environmental impact, the size of the project and taking of private property have not been fully addressed. Before we get to the benefits plan, which are 10 years out, we should be talking about the impact the development is going to have on the community”.
The Community Benefits Agreement, which was signed on June 27th by Bruce Ratner, Mayor Bloomberg and a consortium of community leaders, seeks to provide economic and housing opportunities for members of the project’s surrounding community.

Workforce Development Component
In order to address disproportionately high unemployment rates for people of color, Brooklyn United for Innovative Local Development (BUILD), one of the authors of the CBA, is working to develop and implement the workforce terms of the agreement. As it stands, the agreement requires the developer to hire at least 35% minority and 10% female construction workers, as well as award 20% of contract dollars to minority-owned construction companies.
Many immigrant minorities have access to capital via loans from their national banks, a financing option that’s unavailable to African-Americans. To aid those who may not otherwise have access to much-needed capital to bid, the director of BUILD’s small business development, Michael West, says, “Forest City Ratner is using its financial leverage with financial institutions to make available loans, lines of credit and other resources to minority business, construction businesses and other businesses that need those capital input. Of course, there’s a process that they are going to have to go through to qualify, but those resources will be available to minorities that are not tapped into banks and foreign countries where they have access to capital”.
Our Time Press questioned the broad definition of the term “minority” and wonders what percentage of the contract dollars promised to minorities will actually go to Black- and Hispanic-owned companies. Assemblyman Roger Green, who is working with BUILD, says the information is still forthcoming, but believes attention should be focused on getting a commitment on the construction managers of the project. Green revealed that Atlanta-based McKissack & McKissack, the oldest African-American construction company in the country, would in fact be the construction managers for the first phase of the arena development. Decisions on remaining managerial posts are yet to be made.
Among the many initiatives of the workforce component of the agreement, one of the standout long-term initiatives is the creation of a High School for Construction Management and Trades. “The school will focus on construction technology, construction management and facilities management; students who graduate from the school their senior year will receive a regents diploma and a union card,” says Green. Another attractive initiative is the Employment Linkage and Targeted Job Training, which seeks to match the participant’s level of skill with that required by employers’ business objectives.
As with every development that affects low-income communities, the promise of jobs remains a primary buzzword in the fight to win over residents. However, many of the jobs promised tend to be minimum-wage positions with no room for career growth. Green says, “The pre-construction, construction and post-construction will all be tied to project labor agreement with prevailing wages. That’s being hammered out now; we did our part by defining the workforce development component, but organized labor now has to come to the table and essentially establish a Project Labor Agreement”.

Housing Component
ACORN is leading the development and implementation of the housing initiatives prescribed by the CBA, which calls for 50% of the 4,000 to 4,500 units to be designated affordable housing. “This project includes 2,250 units of affordable housing starting for people who earn $13,000 on up,” says West. According to the terms of the CBA, FCRC and ACORN have committed to long-term apartment affordability and not only affordability at initial leasing.
One of the largest points of contention with FCRC’s proposal has been the developer’s intention to use eminent domain to obtain 13 of the 24 acres needed for the project. The CBA briefly addresses this concern by acknowledging that the developer will provide rental units to displaced residents, but does not make any effort to negotiate the use of the controversial measure. At the rally, Assemblyman Green said the abuse of eminent domain was more of a human rights issue than a property rights concern, but he went on to say that residents in low-income communities are being displaced on a daily basis because of exorbitant rents. He suggested that some Prospect Heights residents’ homes might have to be sacrificed for the greater good of the community, low income to upper income, as a whole. Green quoted Dr. King in saying, “An injustice anywhere is a threat to justice everywhere”.

Community Facilities & Amenities Component
The DBNA will take the lead on this initiative, which includes the construction of a health care center and six acres of open space for community use. The developer will also make the arena available to community groups as well as designate a number of seats for seniors and youth throughout the year.

Environment Assurances
The First Atlantic Terminal Housing Committee (FATHC) will oversee this component of the agreement; establishing a Committee on Environmental Assurances to address the short- and long-term environmental issues that will affect the surrounding community as a result of the intended project. Environmental issues to be addressed include, but are not limited to: an on-site and off-site rodent abatement program; a staging plan for construction that minimizes the effects of idling trucks; a pedestrian and vehicular traffic plan; and encouragement of all contractors to use low sulfur diesel in trucks operating at the project.
The Metropolitan Transportation Authority(MTA) is slated to make a final decision between Extell Development Corporation and Forest City Ratner Companies before the end of the summer. The hope is that whichever group wins the bid, the promises to involve the community in the development process will be kept and consideration will be made of the effects this project will have for years to come.
For the complete Community Benefits Agreement please log on to Brooklyn United for Innovative Local Development’s (BUILD) website at http://www.buildbrooklyn.org (THIS SITE IS INACTIVE)