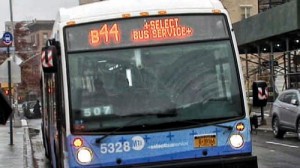 MTA officials said they don’t expect any major fare problems on the B44 Select Bus Service they rolled out this week on Nostrand, Rogers and Bedford Avenues from Sheepshead Bay through the Brooklyn College hub, East Flatbush, Crown Heights, Bedford-Stuyvesant and into Williamsburg.

The extra long buses will run express with 17 stops including two stops in Bed-Stuy – on Fulton Street and on Nostrand and Lafayette Avenues. The 9.3-mile route currently serves 40,000 daily passengers with limited and local buses.

However, the B44 select bus will replace the limited bus and comes complete with bus lanes and improved “bus bulb” sidewalk extensions with on-street fare collection machines that allow passengers to pay before they board and transit signal priority to reduce travel times.

Since the fare must be taken in a machine at the bus stop before boarding, some local residents have expressed concern that it could lead to more fare-jumping arrests, particularly in some of the lower-income neighborhoods the B44  transverses.

MTA spokesman Kevin Ortiz responded that there will be enforcement agents on some of the buses, but it shouldn’t lead to anymore fare-beating than on trains.

“We have select buses in the Bronx and Manhattan, and this has never been a problem,” Ortiz said.

“SBS on the B44 will boost ridership and provide seamless service for our customers in Williamsburg, Bedford-Stuyvesant, Crown Heights, Flatbush and Sheepshead Bay,” said NYC Transit President Carmen Bianco.  “And with the introduction of offset bus lanes and bus bulbs, customers will have easier access to the buses and we’ll see increased pedestrian circulation space at bus stops throughout the corridor.”

As part of the B44 select bus, Bed-Stuy residents who now see their part of Nostrand Avenue in disarray, were also told the city’s Department of Design and Construction’s ongoing construction between Flushing and Atlantic Avenues is slated for completion by late 2014.