School System Out of Control? Is the Problem Leadership, Curriculum?

By ordering police officers into some high schools, Mayor Bloomberg continues the sad American tradition of control and incarceration which has been embedded in the American character and systems for centuries.

The acceptance of guns in the schools by parents is sadder still, particularly when a better solution to school governance can be found in It Doesn’t Have To Be This Way: A Handbook on How to Create a Positive Environment in Our Schools by Frank N. Mickens, principal of Bedford -Stuyvesant’s Boys and Girls High School.
In 15 short chapters, with titles like Effective Leadership, Building The Team, and Students Incentive Programs, Boys & Girls High School Principal Mickens outlines the strategies and commitment necessary to implement the kind of turn-around that he has achieved at Boys and Girls High School, from being among the worst, to one of the best managed high schools in the city.
Now in his nineteenth year at the school, Principal Mickens says that at Boys and Girls, he works with the police to help secure the perimeter of the building along with seventeen teachers, deans, school officers and himself. 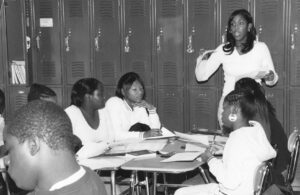 Inside the school, Mickens says he “can’t imagine having three or four police inside the building.  They are not trained to be in here, and they have an adversarial relationship with young people before they even come into the building”.
“What you need is leadership, a committed staff and parents who support you.”  Beyond that, Mickens says that you get effective teachers in the classroom and provide an environment where people can teach.   He has deans on every floor and the message is clear, “You are not going to disrupt the classroom.  And if you do want to disrupt the classroom, I’ve got something for you.”  And he says it in such a way that we can easily see how he can effect an abrupt  change in behavior and a desire not to learn what “something” is.
Mickens sends another message also: If a student wants to achieve, they are offered a myriad of programs and opportunities to find an interest and grow with it in a safe learning environment.   Last year, he promised every student with a Regent’s diploma a $500 scholarship and gave out ninety-six  of  them.
With a school population swollen to forty-four hundred students, drawn from neighborhood housing projects and middle schools that are considered “troubled”, to have achieved this island of calm is a remarkable feat. And logic would say, ‘let’s try to duplicate.’  In fact, Mickens has been asked to consult with various school districts around the country.   One school system which has not called to say, “Hey Mick, how do you do it?”  is New York City.   Mickens says that sometimes “when you as a black man stand up and say, ‘No, we’re going to do it this way,’ they can’t handle that.”
It is odd that in a system headed by a billionaire businessman mayor, and a corporate attorney as chancellor, that with schools failing all around them, there has been not one call to a proven turn around specialist, asking how to turnaround a school in trouble.   Instead what the City is doing is acknowledging failure and phasing out Erasmus, Wingate, and Prospect Heights high schools in order to create five alternative schools.   During this period the schools are no longer accepting ninth graders, which  is increasing pressure on the already- overcrowded Boys and Girls High.  Mickens frankly wonders if the city wants to make Boys and Girls a holding pen while they experiment with these smaller schools.
Mickens feels that the education department and the city are not being held accountable by the black community.  “We allow them to get up in our pulpits and there is no discussion, no dissent.”
“That’s why I’m so hard on these kids, because they have a hard world to face out in this world.   You can’t be a punk out here.”  Principal Mickens says, “The mayor and the chancellor are doing the best they can, but most successful kids have parents who work two jobs and expect their children to work hard also.  Once the expectation to succeed is in the home, then our job is easier.”  Mickens says that one of the reasons there is talk of putting police and not resources in the schools is “because we’re afraid of our children.  Sometimes I think that as a people, we’ve lost respect for elders and the young people in our communities.”