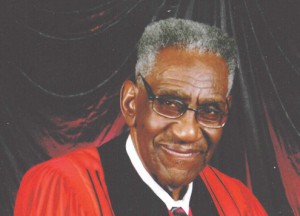 First Baptist Church is proudly commemorating 60 years of the continuous pastoral leadership of its founding minister, Rev. Clarence Norman, Sr. “I think it’s the greatest blessing a minister can have to be able to spend his entire ministry, his entire career, with the same congregation,” said Rev. Norman. “It is only through the goodness of the Lord that I’ve been able to do it. I have had a wonderful journey. Life has been good to me.”
While a student at Wilberforce University in 1953, Rev. Norman said he came home for Christmas and was met by a group who wanted to start a church. “I agreed to work with them to get the church started, and said I would stay with them for one year,” he said. “I stayed a second year, then a third year. And that turned into 60 years.”

Back when First Baptist was formed, Rev. Norman said it was easier for a new church start-up because a storefront could be rented for $100, something he said can’t be done now. The church started with 20 people and within three months had a congregation of 100. “Our church grew very rapidly. People were in the mood at that time. We started in Williamsburg at 122 Throop Ave,” said Rev. Norman. “It was a churchgoing community.”
First Baptist is known for its strong community activities. “We determined at the very beginning that First Baptist would have what I call a secular ministry, a ministry that addresses itself to the needs of people here and now, as well as in the afterlife,” said Rev. Norman. “We organized a local development corporation (LDC) in 1987, the community arm of the First Baptist Church. The LDC is involved in housing, social service programs and educational programs. We have been able to become involved in the rehabilitation of more than 20 buildings here in the Crown Heights area. We have three senior citizens buildings. And we have one home for people with special needs.”

Along the way, First Baptist has had congregants who aspired to political office. “If they were qualified people and good people, we tried to help them. We organized politically right in the community back in 1973-74. We supported candidates. That’s how Clarence got started,” said Rev. Norman, referring to his son, former Assemblyman and Brooklyn County Leader Clarence Norman, Jr.

“Judges didn’t come and join First Baptist,” Rev. Norman said. “We were able to help make our own judges.”
“One of the greatest blessings of my life is my family. I have a wife, two sons, three daughters and 11 grandchildren,” Rev. Norman said. “That’s the joy of my life, and I share that with our congregation.” Rev. Norman said the church puts great emphasis on the responsibility of men. “First Baptist has a large amount of men, because we speak to the men. We try to make men aware of their responsibility as men, as husbands, as fathers,” he said.

“We don’t have a nursery at First Baptist. We want our babies, our children to be right in service,” Rev. Norman said. “If they cry, I try to preach a little louder than they are. That’s all.”

Assistant Pastor Rev. Daryl Bloodsaw believes it is significant “that one man that God called to speak on his behalf has spent his entire ministry at one location. That almost never happens”. Rev. Bloodsaw added, “It is something for all churches to celebrate.”

“I’ve been blessed because I’ve had good people to work with, people that I have loved through the years, and they’ve loved me,” said Rev. Norman. “It’s been a good journey. I’m 82 years old. If I went to sleep tonight I would have no regrets. I’ve lived a full, meaningful life. I’m a happy man.”

First Baptist Church is celebrating Rev. Norman’s historic milestone with a series of events beginning Feb. 13 — including special preaching services, a banquet and a piano concert — and culminating on May 5, 2013.