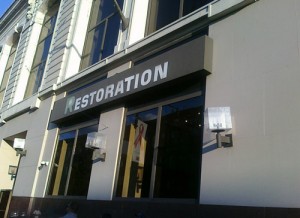 The Restoration Plaza Corporation remains committed to its mission of serving the entire Bedford-Stuyvesant community from its large African-American professional and middle-class base to those still mired in poverty.

So said Restoration President and CEO Colvin Grannum, who was born and raised in Central Brooklyn and remains an esteemed attorney, activist and resident of the area.

“The key to fighting gentrification is promoting family economic stability,” he said. “The goal is to get people into qualified jobs where they can move up the career ladder. Earning a living wage is a key component to economic stability and it helps in preventing displacement from the community.”
Grannum noted that when Restoration was first established, Fulton Street did not have the same thriving business district as it has today, which the Plaza now anchors and whose tenants include three banks, a full-service supermarket, an Applebee’s, several thriving nonprofit arts organizations, the College of New Rochelle and social service centers.

Additionally, through the corporation’s initiatives, a Fulton Street Business Improvement District (BID) was created and millions of dollars in streetscape improvements have occurred, he said.

Grannum said Restoration has also divested from several thousand units of affordable housing that it controlled in recent years but has found better managers of low-income housing to take the reins.
“Our decision led to improved facilities and there has been no displacement because of economics. No person has been evicted due to lack of affordability. We see it as a huge win for the community,” he said.

Grannum said Restoration believes strongly in a mixed-income housing model as a catalytic force to create an environment conducive to forging new social networks between the haves and have-nots.
“Bed-Stuy has always been a mixed-income community with a high concentration of low-income residents,” he said. “But we’ve always had doctors, lawyers, engineers and teachers along with the biggest stock of brownstones in Brooklyn. The question is how to make it all work together for the better of the community.”

Grannum’s comments about the future of Bed-Stuy came in a wide-ranging conversation
a week after this newspaper reported that the Restoration Board had evicted the Committee to Honor Black Heroes (CHBH) and that rumors were circulating the Plaza would be turned into a high-end hotel.
CHBH was started by the late community activist leader Sonny Carson, who was one of the founding fathers in the establishment of Restoration as a federally orchestrated public-private partnership brokered by U.S. Senator Bobby Kennedy in 1967. Restoration’s original mandate held that local grass-roots activists, policymakers and corporate entities work together to build the community.

“There is no hotel. We haven’t even made a preliminary effort to develop a high-end hotel,” said Grannum. “We always got along with Sonny Carson. Our goal is not to kick people out, but to be of assistance to them. For a decade, we tried to be patient with Heroes, but it didn’t work and at some point you have to take action for the well-being of the other tenants.”

Grannum said CHBH signed a lease for a very nominal rent which they never paid and the organization did not treat the office like a commercial space in that people often slept in the office and used the community bathrooms in the morning to wash up.

“We are respectful of the work they (CHBH) do, but you can’t let one tenant disregard the rules,” he said.