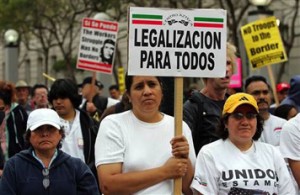 Lost in the national debate over Comprehensive Immigration Reform (CIR) is discussion of amnesty imposing serious harm on African-Americans, particularly descendants of the United States chattel slavery system. Three members of the U.S. Commission on Civil Rights (in their individual capacities) wrote a letter to the Congressional Black Caucus (CBC) stating the “effect of granting legal status or effective amnesty to illegal immigrants*… will likely [disproportionately] harm lower-skilled African-Americans by making it more difficult for them to obtain employment and depressing their wages when they do obtain employment.” The letter [sent April 11, 2013 to CBC Chair Rep. Marcia Fudge] cautioned “The increased employment difficulties will likely have negative consequences that extend far beyond economics.”

The letter – written by Vice Chair Abigail Thernstrom and Commissioners Peter Kirsanow and Gail Heriot – revisits stark data from a 2008 Commission briefing regarding the impact of illegal immigration on the wages and employment opportunities of African-Americans. Ideologically diverse witnesses all testified that illegal immigration “disproportionately impacts the wages and employment prospects of African-American men” causing “a discernible negative effect”.

Professor Gordon Hanson’s research showed that “Immigration… accounts for about 40 percent of the 18 percentage point decline [from 1960-2000] in black employment rates.” Professor Vernon Briggs wrote that illegal immigrants and blacks (who are disproportionately likely to be low-skilled) often find themselves in competition for the same jobs, and the huge number of illegal immigrants ensures that there is a continual surplus of low-skilled labor, thus preventing wages from rising. Professor Gerald Jaynes’s research found that illegal immigrants had displaced U.S. citizens in industries that had traditionally employed large numbers of African-Americans, such as meatpacking.

“The obvious question is whether there are sufficient jobs in the low-skilled labor market for both African-Americans and illegal immigrants,” stated the letter. “The answer is no.”

Professor George Borjas of Harvard submitted testimony stating: “A 10 percent increase in the size of an education/age group due to the entry of immigrants (both legal and illegal)… reduces the wages of native-born men in that group by 3.7 percent and the wages of all native-born workers by 2.5 percent”; and a “10 percent increase in the size of a skill group reduced the fraction of native-born blacks in that group holding a job by 5.1 percentage points.”

The findings applied to native-born low-skilled white males, but to a lesser degree than African-Americans.

According to the Bureau of Labor Statistics, the seasonally adjusted January 2013 unemployment rate for all black Americans—not just those with few skills—was 13.8 percent, nearly twice the white unemployment rate of 7.0 percent.

“The economy has a glut of low-skilled workers, not a shortage,” the letter stated.

The Commission found, “Not only do illegal immigrants compete for jobs with African-Americans, but that competition drives down wages for the jobs that are available. Harvard Professor George Borjas wrote in the Commission’s 2008 briefing: Illegal immigration reduces the wages of native workers by an estimated $99 to $118 billion a year.”

The Commission also found that “Immigration, both legal and illegal, resulted in a disproportionately large increase in the number of high school dropouts in the labor pool. This caused a drop in wages among the poorest and least-educated members of the workforce. As discussed above, these people are disproportionately likely to be African-American men.

Furthermore, there is evidence that wages for these men have not just failed to increase as much as they would have in the absence of illegal immigration. Their real wages, the number of dollars they take home at the end of the week, have actually diminished.”

African-American displacement from low-skilled employment has escalated since Mayor Bloomberg signed an Executive Order in 2002 that effectively turned NYC into a “sanctuary city”. With NYC turning a blind eye to unauthorized immigrant labor, there are signs of wage depression and exploitation of nonvetted and nonunion low-skill workers.

NY Attorney General Eric Schneiderman has conducted several employer prosecutions for wage abuse. In one case, a home health care company failed to pay wages to a total of 109 workers for months while hiring new workers who also did not get paid.

In another case, a Bronx construction company failed to pay prevailing wages to workers on a city-contracted affordable housing project. Some of the workers were paid in cash and excluded from certified payroll reports submitted to HPD while other workers (listed on the reports) were given the reported wage but were required to return a portion of their wages to the company owner/managers each week.

One city-based moving company was ordered to pay restitution to workers who were not paid overtime even when working 75 hours per week. A local fashion boutique chain of stores was found to have underpaid the minimum wage and withheld overtime to more than 100 workers.

A construction subcontractor for a tile restoration project at JFK Airport was required to pay his employees over $50 per hour for Laborers and Mason Tenders and over $70 per hour for Tile Setters. Instead, the owner paid his workers only $10 to $30 per hour by issuing paychecks then required them to kick back a majority of the cash to him, something vetted unionized workers would not likely do.

AG Schneiderman has also prosecuted several identity theft schemes and individuals who prey on unauthorized immigrants. These are only some of the abuses that have been identified.

Yet, according to the Commission, the consequences of illegal immigration for black men and the black community in general are not limited to wages.

The letter to the CBC pointed to stark consequences: “Both lower wages and incarceration likely contribute to one of the most serious problems facing the African-American community today: the dearth of intact nuclear families. The disintegration of the black family began to accelerate during the 1960s. It is one of the great tragedies of modern America that the disintegration of the African-American family has shown no signs of abating.  Seventy-two percent of African-American children are born out of wedlock.  It is now commonly recognized that children born out of wedlock are far more likely to experience a host of negative outcomes than are children raised by their own biological, married parents.”

The Commission’s 2008 briefing found a serious impact of illegal immigration on African-American family formation. “Married men are more likely to be employed and to have higher earnings than unmarried men, although the relationship between marriage and economic success is complex. However, it is obvious that men who are unemployed or are incarcerated are far less appealing prospective spouses than men who hold down a steady job.  Yet, there are fewer and fewer jobs available—and at lower wages— for men in traditionally masculine industries,” stated the letter.

The 2008 Commission briefing and the April 2013 letter to the CBC stated frankly: “Giving amnesty to illegal immigrants would only exacerbate this problem facing low-skilled men, who are disproportionately African-American. The dearth of job opportunities gives these men less confidence in their ability to support a family, and gives women reason to fear that these prospective husbands will be only another mouth to feed.”

The April 2013 letter states: “Granting amnesty to illegal immigrants will only further harm African-American workers  by depriving African-Americans one of their few advantages… which levels the playing field a bit”: E-Verify, a tool available for private employers to establish that their workers are in the country legally.

Commission members Thernstrom, Kirsanow and Heriot issued this caution to the CBC: “Before the federal government decides to grant legal status to illegal immigrants, due deliberation should be given to what effect such grant will have on the employment and earning prospects of low-skilled Americans generally and black Americans specifically. We respectfully submit that granting such legal status is not without substantial cost to American workers.”

When asked about the letter Rep. Hakeem Jeffries said he had received it and “I expect that letter will be actively discussed” at an upcoming CBC meeting. As of press deadline, Rep. Jeffries has not responded to requests for his impression of that meeting.

“In terms of employment, many of the 11 million who are undocumented are already working,” said Jeffries. “It is my view that if you bring individuals out of the shadows and into the mainstream economy you reduce the likelihood that they will be exploited by employers at lower wages and safety conditions that create a hazard. By raising those standards for the formerly undocumented immigrants, you raise the employment standards for everyone. That will result in a benefit.”

Regarding E-Verify Jeffries said, “The Democratic negotiators are pushing for tough employer standards and it appears that some on the other side of the aisle aren’t interested in making sure that employers are asked to comply with the law in as comprehensive a way as possible. That will be one of the issues that will become important in this immigration debate as it moves forward.”

Rep. Jeffries was also asked about the possibility of a poison pill embedded within CIR legislation which might create two tiers of voters: unauthorized immigrants who would receive full citizenship with unfettered voting rights and African-Americans who are subject to periodic reauthorization of the Voting Rights Act, particularly Section 5, which is pending a decision from the U.S. Supreme Court.

Jeffries replied that from a voting perspective many of his colleagues support “a robust pathway toward citizenship for everybody which is consistent with the American way. We don’t believe in this country in dual classes of citizenship where some individuals are subjected to a lesser form of rights and opportunity than others based on their country of origin”.

The CIR bill will contemplate temporary probationary status; fines, taxes and employment verification; and learning English requirements as a step in the direction toward legal residency, said Jeffries. “Then legal residency for those who are undocumented or out-of-status who would have to go to the back of the line behind those who are already on line to become legal residents. Once you get your legal residency then there is an opportunity thereafter to apply for citizenship,” Rep. Jeffries said. “It is a very rigid system that is being contemplated, but ultimately one that will result in full citizenship for those who go through the process entirely.”

*Although the Associated Press has recently decided to stop using the term “illegal immigrant”, the U.S. Commission on Civil Rights utilized the term throughout the 2008 hearing report and three commission members used the term in their letter to the CBC.