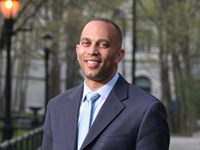 It has been three months since Brooklyn sent one of our best and brightest to Washington, D.C. Rep. Hakeem Jeffries is settling in to his new role after emerging victorious from a contentious primary against Councilman Charles Barron for the seat held by retired Congressman Ed Towns.

“It is a tremendous opportunity to represent the people of the 8th Congressional District – communities like Bedford-Stuyvesant, Ocean Hill-Brownsville, East New York, Canarsie and Coney Island – down in Washington, D.C.,” said Jeffries. “I’ve gotten the opportunity to work
closely with the Congressional Black Caucus, as well as the Democratic leadership and members on both sides of the aisle attempting to advance the business of the American people on issues like gun violence prevention and comprehensive immigration reform.”

Rep. Jeffries sits on the House Budget and Judiciary Committees. “I made the case that based on my legislative experience negotiating budgets in Albany and fighting on behalf of the communities that I represented, as well as my prior experience as an attorney and several pieces of legislation that I introduced and successfully passed related to both the civil and criminal justice system,” said Jeffries. “I had both the interest, the background and the opportunity to effectively serve the communities that I was elected to represent through membership on both the Budget and Judiciary Committees. Thankfully, it worked out and I’m doing the best I can to advance an agenda that stands up for working families and middle-class folks, communities of color on both the Judiciary and Budget Committees.”

The congressman explained the budget process: “There are no subcommittees on the House Budget Committee. We meet entirely as a committee primarily around the budget document that must be submitted each year by both the House and the Senate. The president then submits a budget. All sides will then have to get together to negotiate a final product. That process will begin in mid-April.”
Jeffries said he voted against the House budget put forth by Budget Chairman Paul Ryan (who lost his vice presidential bid on Mitt Romney’s ticket), and is more supportive of the Senate budget which he thinks is more responsible because it takes a balanced approach to dealing with
our economy. “The Ryan budget attempts to balance itself on the backs of children, working families, middle-class folks, senior citizens, and the sick and the afflicted,” said Jeffries. “It is an irresponsible budget and I communicated that on the House floor and will continue to do so.”

Acknowledging that the federal budget is funded by continuing resolutions due several years of no budget agreements, Rep. Jeffries said he hopes there will be a budget framework in place for the 2013 – 2014 fiscal year. “The problem that exists is that many of us on Capitol Hill are unwilling to sign off on a budget that dramatically cuts Medicaid, turns Medicare into a voucher program, cuts $168 billion in spending for higher education, doesn’t guarantee that Social Security will be protected from privatization, and adopts $85 billion in sequestration cuts that will cost the economy approximately 750,000 jobs,” said Jeffries. “That’s the Paul Ryan budget. It’s irresponsible in the view of myself and many others. We are going to continue to press that point. If we are unable to come to an agreement about a budget that is fair and decent and humane, then we will continue to move forward with a continuing resolution.”

Jeffries said sequestration cuts were largely adopted within the continuing resolution, with the exception of Defense and certain other aspects of public safety. He voted against the continuing resolution because it signed off on things like cuts to Head Start, Meals on Wheels programs for seniors and Superstorm Sandy aid, as well as significant cuts to funding for public housing residents. The sequestration cuts will result in approximately $190 million being cut in NYCHA funding. “NYCHA already lacks the resources necessary to make repairs in a timely basis, fix broken elevators and improve the physical condition of the public housing developments that are in its portfolio,” he said. “An additional $190 million in cuts is unacceptable.”

When asked about the 29 million fewer citizens who voted in the 2010 mid-term elections than the 2008 presidential election which led to a Republican-dominated House that opposes President Obama’s policies at every turn, Rep. Jeffries said it’s everyone’s obligation to participate in the democratic process. “That’s what makes this country strong. I am not in the position to tell people — in my governmental capacity — how they should vote,” said Jeffries, “but I am in a position to suggest that people need to pay close attention to the ideas that have been put forth by everyone down in the Congress, including Paul Ryan – the current chair of the Budget Committee – and make decisions based on what’s in their own best interests as they participate in the electoral process. Elections have consequences and those consequences impact people in terms of what our governmental officials put forth.”

Citing the current national debate on solutions to gun violence, Jeffries pointed out the NRA – a classic special interest – that is fully engaged in trying to do things to prevent the Congress and
other state legislative bodies from enacting sensible efforts to stop or slow down gun violence.

“That is one of the reasons why it is important for the public to engage all levels of government and to pay attention every two years including in the mid-term election cycle, and not just every four years, when the president is on the ballot,” said Rep. Jeffries.

Rep. Jeffries sits on two Judiciary Subcommittees: Courts, Intellectual Property and the Internet and Regulatory Reform. He requested those committees because he believes the technology and innovation sector will increasingly be important for our economic viability in New York City and across the nation. A strong tech sector would temper the dominance of NYC’s real estate market and financial sector which are subject to extreme cyclical booms and busts that impact employment and tax revenue.

“After 2008, I came to the conclusion that for the future viability of our community and city, we’ve got to strengthen other sectors that exist in the Big Apple. The obvious one is technology and innovation,” said Rep. Jeffries. “We have the Brooklyn Tech Triangle that has been developed in our county – which includes the Navy Yard, Downtown Brooklyn and DUMBO.

There are several technology and innovation companies that have located themselves there providing employment. We also have schools like City Tech, which is a public university, as well as NYU Polytechnic Institute, which are training young people for these opportunities. The
President, during the State of the Union Address, mentioned the importance of investing in so-called stem fields – science, technology, engineering and mathematics.”

Jeffries has three goals as a member of the subcommittee: “First, support the continued development of the technology and innovation economy in New York City and this country; second, to make sure that we allow for start-up companies to continue to develop if individuals have entrepreneurial ideas they want to turn into reality; and third, make sure that we invest resources on the public side and from the private sector in science, technology, engineering and mathematics education all across the country with an emphasis on making sure that resources are put into inner-city communities like those that I represent to make sure that our young people are prepared for these opportunities.”

Rep. Jeffries wants to make sure that young people (in general) and young people of color coming out of Brooklyn have equal access to the jobs that will be available in the technology and innovation economy which will provide a vehicle for them to support themselves and their families in a meaningful way. “You have black scientists and inventors who have made significant [contributions] in this country and for the world,” said Jeffries. “We’ve got a new generation that we need to prepare to continue the work that those black inventors have done since the founding of this country.”

The Internet is currently unregulated although there is some discussion going on in Congress regarding the proper way for the government to interact with the Internet. “The regulation of the Internet and the rules related to copyright, trademark and patent all fall under the jurisdiction of the Subcommittee on Courts, Intellectual Property and Internet that I belong to. We want to essentially allow it to thrive so that the companies like Google and Facebook and Twitter and
Yahoo! and others which have sprung up, created hundreds of thousands of jobs and hundreds of billions of dollars of economic activity each and every year, continues to occur here in America,” said Jeffries. “We are losing manufacturing jobs but we are gaining jobs in technology and
innovation.”