During the Rediscovering Lost Values Tour we embarked on a journey and delved deep into American history. Specifically, how the rights of people across the world have been violated and focusing on the Transatlantic Slave Trade, segregation, Jim Crow and the events that led to the Voting Rights Act.

What resonated to me most throughout the entire tour was the lunch counter sit-in simulation inside of the National Center for Civil and Human Rights Museum in Atlanta.

Many members of the group, including myself, experienced a simulation. I was seated in a row of diner-style chairs and was instructed to put headphones on. The staff of the museum told me to place my hands on the counter and close my eyes. During the simulation, I heard threats, my chair vibrated vigorously to simulate the kicking and all the movement going on around me.

As I was sitting at this counter, my first thought was that I would have retaliated. I remembered Black people did not have rights and retaliation would have led to the death of one’s family or self. Peacefully protesting was our only recourse.

Studying about the history of my people and the blood that was shed for us to have rights that all humans deserve, truly makes me appreciate Dr. King, Bayard Rustin, Ameila Boynton Robinson, Rosa Parks and all the important figures of the Civil Rights Movement. This trip has  opened my eyes and caused me to want to use all the emotion I have from this experience to create change for the betterment of others and myself. 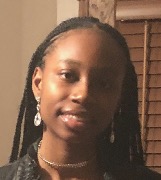 In Greensboro, North Carolina, there were a series of nonviolent protests called the Greensboro Sit-ins. These sit-ins were started because of the Greensboro Four: Ezell Blair, Jr., David Richmond, Franklin McCain and Joseph McNeil on February 1, 1960. This event occurred in downtown Greensboro at Woolworth’s lunch counter where African Americans were not allowed to eat at the same counter as whites. The police were called and so was the media. The fact that police officers could not act on the four students due to the lack of incitement and/or stimulation caused whites to become exasperated.

When the Rediscovering Lost Values Tour visited the National Center for Civil and Human Rights in Atlanta, Georgia, we had the opportunity to experience a simulation of a lunch counter sit-in. This is an experience I will never forget.

As I sat at the counter, I put on the headphones, closed my eyes and put my hands on the counter. I began to hear a bunch of threats being thrown at me in my left ear and my right ear. It felt so real! I put myself in the shoes of my ancestors and felt the racist segregationist kicking me, shaking my chair, calling me n****r and threatening to stab me in the neck with a fork. This made me very upset and angry. I know the people who were involved in the sit-ins were angry, but they didn’t let their anger get the best of them, they used it to create change.

Being able to experience the lunch-counter simulation shows me how strong our people are. Shows how determined they were to create change for future generations even if not their own. This experience truly has motivated me! 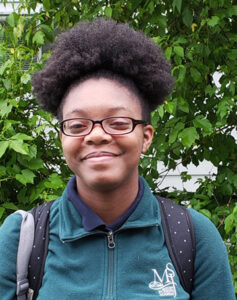 That’s all the difference was

But it was enough to justify:

Husbands ripped from their wives

Children ripped from their parents

Dragged out of the safety of their homes

Innocent teens being shot and killed

Kids and teens tried as adults

Just because of the color of their skin 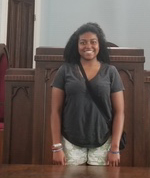 Dr. King: “Our lives begin to end the day we become silent about things that matter.”

Dexter Avenue King Memorial Baptist Church is memorable in that it brings forth experiences of African Americans during the Civil Rights Movement. Although Blacks were frequently being mistreated by whites, they looked forward to congregating and worshipping with each other once they entered through the church doors. Churchgoers knew once they entered the building, church was a safe haven for themselves and their family members.

Dr. Martin Luther King, Jr. led the congregation from 1954 to 1960. In his years of life, Dr. King stood against segregation and oppression. Dr. King was not only the leader of the Montgomery Bus Boycott and the organizer of the march from Selma, Alabama to Montgomery, Alabama, he was also the leader of the African American Civil Rights Movement. The murals in church depict the struggles and prejudice of the Civil Rights Movement. As told to me by the Tour Director, Ms. Wanda Howard Battle, the church played a pivotal role during the Civil Rights Movement and in history today. I felt, and still feel, honored and privileged to have had the opportunity to enter into the same sanctuary where Dr. King delivered many sermons.

I’m thankful for having the opportunity to have an opportunity. As my mom always reminds me, “To whom much is given, much will be required.” Therefore, I will not be silenced! 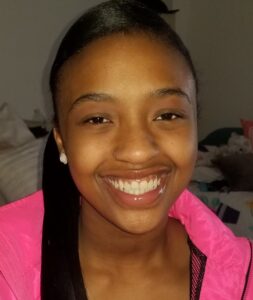 During my time on the Rediscovering Lost Values Tour, I learned a lot about Black History. I thought I knew about my history, but this trip broadened my horizons about not only Black History, but the history of other groups and the oppression they faced.

When visiting the Center for Civil and Human Rights in Atlanta, Georgia, I learned about human rights and that, for example, in China they enforce censorship on the citizens and their Internet usage. In China, the citizens are not permitted to talk about any controversial topics on social media; if they refer to anything that questions the government’s ability or choices, that will create severe bots on the site to neutralize the “problem” and steer the conversation away from the controversial information that may cause other people to form their own opinions and think that maybe what’s going on isn’t right.

The museum has a simulation of a lunch counter sit-in. In school, our class watched videos about the training sit-in participants had to endure to ensure that they would not fight back and make the sit-in peaceful and nonviolent. As our group walked up to the lunch counter, we sat down, put on headphones and placed our hands on the counter and closed our eyes. With our eyes closed, we listened. During the simulation, my chair began to shake and I heard voices of men who were a part of the nonviolent protest and what they went through. They were hassled, beaten, threatened and they were all attacked by a mob. After the simulation was over, I had a new perspective on what the participants went through, the experience is something that changes from just reading and watching videos about it. The simulation should be experienced by all students and adults. 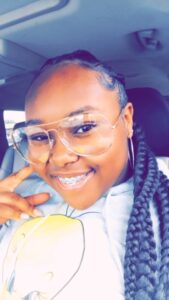 March 7, 1965 was a terrifying day in American history. “Bloody Sunday,” the day where approximately 600 people crossed the Edmund Pettus Bridge in an attempt to march from Selma, Alabama to Montgomery, Alabama for voting rights. State troopers violently attacked the peaceful demonstrators to stop the march.

When the Rediscovering Lost Values Tour went to the National Voting Rights Museum and Institute in Selma, Alabama, I learned that Southern State Legislatures passed and maintained a series of discriminatory laws that disenfranchised African Americans across the South, prohibiting us from voting. Some of the disenfranchising laws included charging African Americans a poll tax or requiring us to pass a literacy test for the right to vote.

I saw weapons that were used by the white state troopers to prevent the nonviolent protesters from crossing the Edmund Pettus Bridge. They used pen guns, tear gas, bats and all types of things, out of hate and cruelty. 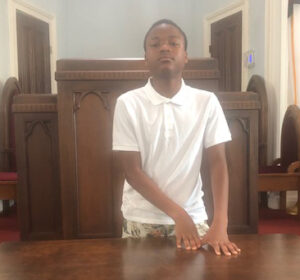 This is my third consecutive year going on the Rediscovering Lost Values Tour. On this year’s tour, we ventured off to the south and visited a number of museums and historic sites. Some of the places that we visited were EJI (Equal Justice Institute), the National Voting Rights Museum and Institute, Edmund Pettus Bridge and the National Center for Civil and Human Rights in Atlanta.

The place that had the most profound impact on me was the Edmund Pettus Bridge. Although we visited the bridge on the previous trip, we walked the bridge, which made me feel like I was walking in the footsteps of my ancestors. I felt powerful, fearless and proud as I marched across that bridge. The thought of me walking on the same bridge as Dr. Martin Luther King, Jr., then, ultimately, President Barack Obama, was very empowering. The blood shed on that bridge that Sunday was disheartening and sad, but it was a sacrifice that I am very grateful for.

Another reason why the bridge had an impact on me was because it represents perseverance and strength. Despite all of the slaughtered and brutally-beat people, others still came out and built up the courage to stand up for their rights. Every person on that bridge was trying to gain the right to vote, even white supporters.

Americans should never disregard the right to vote, especially when our ancestors were murdered and beat to gain voting rights. I am truly excited to exercise my right to vote when I come of age. I thank you, Mr. and Mrs. Robinson, for giving me an opportunity that not a lot of African American youth get to experience. 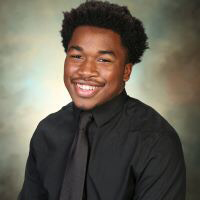 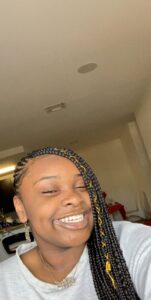 “Bloody Sunday,” March 7, 1965: As 600 people crossed the steel-arched bridge spanning the Alabama River, marchers gazed up staring at the name of a Confederate general and reputed grand dragon of the Alabama Ku Klux Klan, Edmund Pettus. The name stared right back at them in big block letters emblazoned across the bridge’s crossbeam. My ancestors marched with dignity and pride in church clothes for a right that so many take for granted today – the right to vote.

When they crossed the bridge, they were met with pure, vicious violence, evil and wickedness. After the brutality African Americans faced on that bridge that was witnessed nationally, the effects of “Bloody Sunday” galvanized public opinion and mobilized Congress to pass the Voting Rights Act, which President Johnson signed into law on August 6, 1965.

Today, the bridge is now a landmark in history. 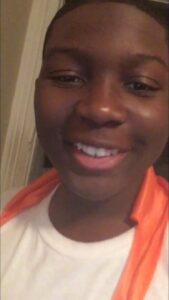 Jimmie Lee Jackson was born on Dec. 16, 1938 in Marion, Alabama. He was the youngest deacon at his church. He fathered a daughter and fought in the Vietnam War. Even as a veteran, Jimmie Lee experienced southern exclusion and was denied the right to vote.

Jimmie Lee tried to register to vote five times in the State of Alabama and was denied every time. On February 18, 1965, Jackson participated in a night march in protest of the arrest of a field secretary for the Southern Christian Leadership Conference. Local police and state troopers attacked the marchers.

Jackson took his mother Viola and grandfather to safety in a nearby restaurant.  State troopers pursued Jimmie Lee and his family. When Jimmie Lee attempted to help his mother from a brutal police assault, he was shot twice, and then beaten as he tried to flee the building.