Rediscovering Lost Values 2018- On the Road with 8 Scribemasters

Last months, eight Brooklyn-based students, ages 12-17, and their 10 guardians visited three states in three days for a journey through the hidden chapters of American history omitted from classrooms, textbooks and core curriculums.

They toured the battlegrounds of the Civil Rights movement; spoke to people who participated in the struggle; toured institutions where  images, texts, art and relics are on display;  and even walked in the footpath of The Rev. Martin Luther King Jr.

The experience enlightened them in a way that has changed their lives, their thoughts, aspirations and even habits. They vowed to share their discoveries with friends, other family members and their schools, through the various media forms.

Daily open discussions and debriefings, organized by community activist couple Rev. Taharka W. Robinson, founder of “The Rediscovering Lost Values Tour” — now in its 11th year —  and his wife and “Values” partner Bianca Robinson offered daily opportunities for the students to express their feelings and share their thoughts on their experiences — within the context of today’s world.  There was a collegial air about the journey, but it was more than a field trip.

He and his team which included Bruce Paul Green, head of the Brooklyn Anti-Violence Coalition,  lectured at the foot of the Selma Bridge; offered reminders of each day’s place in history, like the May 17th (1954) anniversary of the Brown vs Topeka Board of Education; and permitted their charges to query “visiting professors” —  real people in various positions, from Miss Kim, a hotel culinary chief to the communications chief of the Equal Justice Institute,  and “Rediscovery’s” accompanying dean, the Hon. Annette Robinson. who framed the stories, and provided the “value” of prayer and song.

Our Time Press deputized the students as jr. journalists with Bianco Robinson as their editor.  The series begins today with scribemasters Shelby Hudson and India Cordero’s commentaries. – Bernice Green 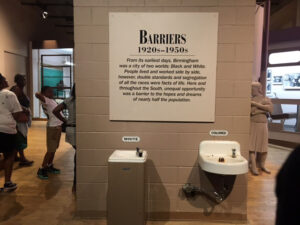 Once we entered the Birmingham Civil Rights Museum, we were directed to a room to watch a film before we went on the self-guided tour. The film depicted the horrific treatment Black people endured during Jim Crow between the 1920’s and 1950’s.  After the film was over, we entered an exhibit and the very first showcase was two water fountains. One fountain was labeled “colored people” and the other was labeled “whites only.” The fountain which was labeled colored people looked old and was covered with rust and the whites only water fountain was clean, more urbane and aesthetically pleasing. 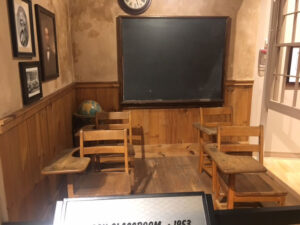 These two exhibits really impacted me. To think that people created laws that allowed Black people to be treated unfairly because of the color of their skin and to put forth the belief that white people were superior to Black people because of the color of their skin was evil. However, despite the brutality and laws working against them, our ancestors fought for equal rights.  I am thankful they did not give up!

As we walked inside of the 16th Street Baptist Church, I could not help but to imagine the traumatic day on September 15, 1963 when the church was bombed and 4 young girls were killed. There were actually 5 girls in the bombing. The youngest, Denise McNair (11), Addie Mae Collins (14), Carole Robertson (14), Cynthia Wesley (14) and another girl, Sarah Collins, the sister of Addie Mae Collins. Sarah Collins was in a stall in the church’s bathroom when the blast occurred. The stall protected her from the blast above but not from the glass that flew in her right eye. Doctors had to remove her right eye and replace it with a prosthetic eye.

Though renovated, the church still keeps its features from before the bombing. A very interesting fact about this church is the Jesus-stained glass. After the explosion, the body of Jesus was not destroyed; only the face was blown off. The thought of the blast being on the same side as the stained glass but only Jesus’s face was destroyed left me in awe. One of the new features added to the church was a blue stained glass that has an African-American male dressed in all-white with his arms spread apart reaching to the sky. One of his hands is faced towards the sky while the other is opened towards the worshippers, revealing his palm. As told by our tour guide Mr. Bragg, one hand represents “Oppression” while the other shows “Forgiveness.”

The last point I would like to share is about the bomber, Rob Chambliss, a white supremacist who terrorized, murdered and injured young girls that were preparing to worship the Lord in a church, a place that is supposed to be sacred and safe. I was outraged when I learned that it took 14 years for Chambliss to be tried and convicted for killing 4 young girls.

The 7 young people and I felt very sad and disturbed after watching the short documentary of the 16th Street Baptist Church Bombing and speaking with our tour guide Mr. Bragg–we were all speechless.

To know more information about this historical moment and church, I recommend you to travel to Birmingham, Alabama and see this for yourself. This is a place that everyone should experience.