REBURIAL FOR 400 AFRICANS IS COMMEMORATED IN SIX CITIES 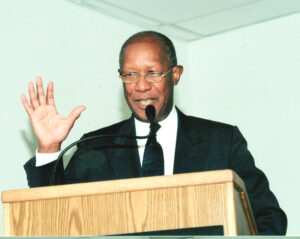 The Schomburg Center for Research in Black Culture held a press conference to announce the “Rites of Ancestral Return: Commemorating the Colonial African Heritage,” a series of public events memorializing reinterment of the remains of more than 400 Africans who were exhumed in 1991, after their discovery was revealed while digging to build a new government building in lower Manhattan. The section of the graveyard, which has come to be known as The African Burial Ground, is considered by many Africans and African-Americans as “sacred ground” or “Our Ground Zero”.
“The African Burial Ground represents the important roles and major contributions that enslaved African men, women and children made to the development of the colonies, economy and culture of America,” said Howard Dodson, chief of the Schomburg. “This is a historic and crucial link in America’s story not just in the North and Dutch New Amsterdam, but in the South. With the ‘Rite of Ancestral Return’, we celebrate the contributions of our ancestors.”
The area, just north of City Hall, and west of Foley Square and the State Supreme Court Building, is just a part of a vast burial ground where 20,000 Africans had been enslaved here in New York City. They were buried in a segregated area, which is now the seat of the city’s municipal government. Africans are buried throughout the area, including under City Hall.
When the discovery was made, activists, led by the late Abubadika Sonny Carson, demanded the halting of digging at the site. The move was resisted at first by the U.S. Government, but under mounting pressure, work was stopped. The Black community of New York and many other U.S. cities held ceremonies, memorials and sacred rites at the site and formed a committee to deal with the government’s plans for the site. Many heated meetings were held and although the main demand was to not build on the site at all, was not won, many other community calls were adhered to. A decision was made to conduct a study of the remains to determine what happened to many of them, how they lived, their lifestyle, etc. The community demanded that the study be made by a preminent Black university, Howard University, and their research team led by Michael Blakey, Ph.D.Eloise Dix and Ollie McLean represented the Committee of Descendants of the African Ancestral Burial Ground. Ms. McLean told of the trials and tribulations during the struggle to get due respect for those ancestors buried at our “Gound Zero”.Elder Adunni Oshupa Tabasi, a member of the former Federal Steering Committee of the African Burial Ground, rebuked those who called the ancestors “slaves,” adding that they were captive Africans. She said “we dishonor them by referring to them as slaves.”  She also displayed two New York Times articles describing the 60-million-dollar Holocaust Museum and its additional wing in lower Manhattan, and demanded that we seek no less for the more than 20,000 buried there and millions who suffered in the Middle Passage and subsequent enslavement.
Howard Dodson, newly appointed head of the reinterment plans, announced “Rites of Ancestral Return: Commemorating the Colonial African Heritage” September 30 thru October 4, a five-city memorial tour of four of the bodies (one adult male, one adult female, one male child and one female child) prior to their return to New York for burial. Ceremonies will be held in Washington, D.C., Baltimore, MD, Wilmington, DE, Philadelphia, PA and Newark, NJ.  At 11 am on Friday, October 3, a flotilla will transport the remains across the Hudson River to Wall Street (where slaves were sold at the original stock market, the colonial slave market) in lower Manhattan.

A procession up the Canyon of Heroes will then follow north to Foley Square, the site of the largest monument to Africans in the U.., “Triumph of the Human Spirit,” by sculptor Lorenzo Pace and a ceremony at the African Burial Site (Duane and Elk Streets). Reinterment will take place at the burial ground on   October 4.  Baltimore’s Tonya Hardy, executive Director of the Commission on African-American History & Culture; Margaret J. Owens, senior consultant, Mayor’s Office of Economic Development in Wilmington, Tanya E. Hall, Executive Director of the Philadelphia Multicultural Affairs Congress of the Convention and Visitors Bureau, and the Rev. Dr. M. William Howard, Jr., pastor of Bethany Baptist Church in Newark, NJ, laid out their plans to honor the ancestors during their final farewell.  On Saturday, September27, the Schomburg will screen four videos: The African Burial Ground: An American Discovery; Feel It in My Bones; Then I’ll Be Free to Travel Home and Slavery’s Buried Past.
On Tuesday, September 30, there will be a tribute ceremony at Rankin memorial Chapel at Howard University, Sixth St. and Howard Place, NW.
Baltimore will hold a Tribute Ceremony at Willard W. Allen Masonic Temple on Wednesday, October 1, 1307 Eutaw Place beginning at noon. Later in Wilmington, DE. at 6PM a Ceremony/Procession at The Rocks, followed by an 8:15 Tribute Ceremony at Mother African Union Church, 9th & Franklin Street.
In Philadelphia on Thursday, Oct. 2, at 11AM, there will be a tribute ceremony at Mother Bethel AME Church, 419 South 6th Street (Richard

Allen Avenue) and in Newark, NJ, a tribute will take place at 6pm at Bethany Baptist Church, 275, W. Market Stree
The Howard study will produce three reports: a bioskeletal, an archeological and a historical volume of the findings.  These findings are the basis for the re-interment and the other central components of the overall project. The schedule for completion of the Howard papers is as follows: Final History Report, December 2003; Final Bio-Skeletal Report (Anthropology) December 2003; Final Archaeology Report, July 2004; Integrated and Popular Reports, March 2005, GSA has asked the U.S. Army Corps of Engineers to identify and locate all docume

nts created over more than ten years of this project. Ultimately, these documents will be collected, inventoried, and maintained in an archive that will permit researchers to access the information about the African Burial Ground. KB / IPS