Real Estate Matters: Deborah Ann Leary and Mr. Jimmy Leary, Father and Daughter “Getting Started” and Not Giving Up

Part II of Three Parts
By Bernice Elizabeth Green
Several people walked away from security jobs this week at 406 Tompkins Avenue, moved by stories or memories of families, friends or neighbors turned out into the streets: displaced. Not a pretty picture, and apparently they didn’t want to stand around and watch Mr. Jimmy Leary of Jimmy’s Candy Store being forced to leave his storefront enterprise of 41 years.

Mr. Leary’s youngest daughter Deborah Ann Leary (“Ann”), says she learned over the years from her father that taking care of business requires deep personal investment. And, for Ann, it also means speaking truth to power, loud and clear with determination.

So she exhibited tremendous cool under the pressure of the past six weeks, since her Dad was locked out of his store on May 27th, with SheShe, his cat, locked inside, even as she admonished, “Please, don’t get me started!”

This week the landlord’s representatives have unlocked the store for the purpose of Mr. Jimmy, Ann, their family members and supporters taking whatever they own from the rental. The family has taken careful inventory, and reported, yesterday, that “considerable merchandise and cash money are missing.”

With the fire and fierceness of all the great community leaders that ever walked Tompkins Avenue, Ann is as determined to get to the root of this matter as intently and determined as the man who made the mistake last week of attempting to tape record her conversations. She was not feeling to good about that, and there are other things not to feel good about: 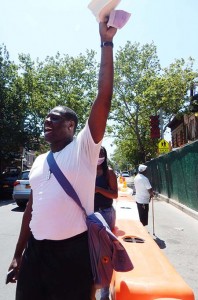 The stark headlines of The Daily News, The New York Post, Enquirer and other papers with May 26 and May 27th dates, the keys to the property dangling unnoticed on a chain and blending into the woodwork, or the smell from open cat food cans, trash strewn about in a backroom where the cat apparently lived alone for weeks, reportedly fed by the building’s owners.

Merchandise and stuff carelessly jammed in and piled to the ceiling in a corner separated by an apparent sheetrock wall from a soiled toilet.

The loneliness of the remaining one aluminum can of Pepsi in the commercial glass-front refrigerator that previously was stocked with cold drinks on May 27th when her father was forced to leave the premises.

At around 11:00am yesterday, nearly 20 hours after a building collapsed at Fulton and Tompkins during a demolition effort, it was reported, there was another roar and those walking by Jimmy’s Candy Store on Tompkins at 406 or standing nearby, heard it. Ann “got started” with all of the depth and breadth of a Sojourner, the fight of a Joan of Arc, the toughness of Venus and Serena.

“In a situation like this anything can set you off,” Ann said, “but for me it really was about the death of a business, the demolishing of a dream; it was the sleepless nights worrying and sweating and thinking about how it all was not fair: the bad paperwork, the court documents made out to the wrong names, the insults and the disrespect.

“It was about my entire family caught up in this mess, and still trying to do the right thing. Here we are working hard to make a deadline, packing up my father’s dream, in there taking down the monument that my father built and putting it in boxes.

“Do you know what it’s like to watch someone build a dream, and then you help dismantle it. It’s not right!”

To Ann, it’s more than a matter of not-right and wrong; it’s about who gets to decide what’s right and what’s wrong, and how the definitions are flip-flopping as rapidly as the community appears to be changing.

“They tell me I’m wrong, but I know I’m right. I’m just getting started!”

Last Saturday, Ann was invited to speak to members of a Jefferson Avenue Block Association– just to “explain what was going on.”

When she revealed details of her father’s plight, it was as if the floodgates opened. Most everyone there had a personal story or knew of someone who had — as Ann describes it — “an interesting situation.”

Last Friday at a press conference called for and led by Ann’s cousin, popular community leader Sharonnie Perry, the poignant comments from New York State Assemblywoman Annette Robinson, Ms. Perry, and other community advocates hit home and is working to break the silence: if you got to sell, sell high. If you can sell low, sell to those who respect you.

“And if you rent, and you’re disrespected, know your rights and speak out. The problem,” says Ann, “is fear. I don’t understand why so many people are so afraid to speak up and admit to what’s happening on their blocks and in their homes?”

At Ms. Perry’s conference, about forty or more people, mostly community residents, formed the core of a larger, more diverse body, bringing the number of actual conference participants to a couple of hundred.

“Drivers honked their horns, people yelled out of the windows of city buses, cars, and all kinds of trucks. Even a sanitation truck. They were white people and black people. They raised their fists in the air. They yelled out, ‘It’s about time, it’s about time.’ And ‘Keep it up! Keep it up!’ Some people came up to me and asked ‘How can I join your organization?’ Others asked questions about the signs held by our young people.”

Ms. Helen Legette, a longtime elder friend of the Learys lives on the 406 block. Ms. Helen sends up prayers and offers the gentle spiritual consolations Ann needs. Ann purchases Ms. Helen’s groceries and drives her to the polls when it’s voting time. Yesterday, Ann returned the wheelchair that was stored at Mr. Jimmy’s Candy Store for Ms. Legette.

Mr. Barry, who’s been a friend over years, selling daily newspapers for Mr. Jimmy is out of a job, he says. But he’s sticking around for his friend, Mr. Jimmy.

It is Mr. Jimmy’s wish that a grocer friend purchase some of the goods that Jimmy won’t need anymore: masking tape, rope, batteries. Ann found a 1966 Jet Magazine, and a tattered 1937 newspaper comic strip and the NY Daily News’ November 1963 headline announcing the assassination of John F. Kennedy. Of course, she’s keeping those items.

“Every peppermint ball, every penny cookie, every Mary Jane, every flashlight, every Dream Book cost my dad money. Everything in this store costs,” she said. So of course an inquiry from an outsider about Mr. Jimmy’s two old-fashioned 1950’s phone booths just fueled Ann’s “getting started” flame; how could anyone think her Dad, a businessman, would part with gifts of such value. Dalton Taylor, owner of The Victorian antiques emporium, will store them until Mr. Jimmy wants to sell or finds his own a space for them.

Ann reports that workers hired to “secure” the building instead opted for having the personal security that comes from peace of mind: “almost every last one of them threw up their hands and waved good bye. ‘I’m outta here!”

Yesterday afternoon, a woman came to the site, and told her son, he wasn’t working security for the property owners. (He had just gotten the job). “She was real mad. She said, ‘Hell no! Not Mr. Jimmy’s store. My son won’t be working here tomorrow.’” (Our Time Press spied three new security officers at their posts at about 6p, yesterday. Ann, a retired Corrections Officer, commented that just about everyone needs a job, “these days.”)

As we go to press, it was reported that tomorrow (17) is the last day the building’s owners’ representatives are allowing the Learys access to the storefront to clear out their possessions. It was also reported by Ms. Perry that she will return to continue the process of her unique and working brand of community intervention in these real estate matters.

Mr. Jimmy described to us his initial impression when the doors to his store were opened to the light, to fresh air and to his entrance: something had changed; “it was like walking into a death chamber.”
Both Ann and Mr. Jimmy are grateful for the community support, and overall they feel blessed. Meanwhile, Ann is determined to right this situation for her father, and she is seeking some compensation.

Then she asks, again, with well-chosen words that in their simplicity aptly describe the current state of affairs of gentrification’s intense imbalanced socio-economic side: “How can you dare to think that Your Wrong is right and My Right is wrong?”