On Saturday, June 5, Ronald Reagan, 40th President of the United States, passed away. For the next several weeks, I would imagine that we’re going to hear a number of platitudes about how Reagan made Americans feel good about themselves again, about how he beat back the world threat of Communism, and about how he was the Great Communicator, able to use his acting skills to create a rapport with Americans the likes of which we had not seen up until that time. And to be fair, these accounts have more than a ring of truth to them. Reagan did make
a number of Americans feel good and he was able to communicate a set of powerful principles and practices to people in a way that resonated with them.
I remember the impact his policies had on my neighborhood, my parents, and on me. But as is normal when anyone dies, the rough edges are made smooth. And with someone of Reagan’s stature, what’s left when the historical account has been paved over with good intentions is an individual with few to no flaws. Given the way African- Americans felt about and lived under Ronald Reagan, this process of historical revisionism is problematic. His presidency was anything but sunny for us.
Take the first place Reagan first announced his candidacy for the 1980 presidential run. He didn’t announce it in Iowa, nor in New Hampshire. He didn’t even announce it in California, the place he came to prominence. 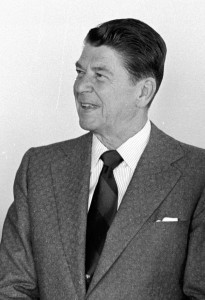 He announced it in Philadelphia, Mississippi. The only event of historical note to ever happen in Philadelphia, Mississippi, up until that point, was the murder of three civil rights workers (Andrew Goodman, Michael Schwerner and James Cheney) in 1964. Other candidates, including those from the Democratic side of the aisle, made it to Philadelphia, Mississippi as well. Southern voters are a powerful bloc. But in Ronald Reagan’s case, when he appeared before the citizens of Philadelphia, he spoke of one thing – his support for states’ rights. And no matter the argument, I’ve seen printed that Reagan meant the phrase in the context of the “Sagebrush Rebellion,” that focused on wresting control of western grazing lands from the federal government, we all know what “states’ rights” means in the South.
After he was elected, things didn’t get much better. Take, for instance, the COINTELPRO affair. COINTELPRO was a unit of the FBI formed to combat what was perceived to be the Communist insurgency. It was later used by J. Edgar Hoover to spy on, and commit both character assassination and literal assassination of black activists. In 1980, two COINTELPRO officials, L. Patrick Grey and Edward S. Miller, were convicted of having “”conspired to injure and oppress the citizens of the United States” while working for the project. The convictions of Grey and Miller were seen by many as a limited victory, but a victory nonetheless for those interested in the principles of practice of democracy.
But Grey and Miller never spent a day in jail. In 1981, while they were awaiting appeal, Reagan pardoned them. Oddly enough, he never pardoned political prisoners such as Geronimo Pratt, Dhoruba Bin Wahad and countless others incarcerated wrongly because of the actions of agents like Grey and Miller.
Beginning in the late 1970s, urban America was hard hit by poverty, crime and a growing drug scourge with a little name: crack. Reagan’s response was draconian. In order to drum up support for repealing welfare, Reagan began giving speeches featuring the tale of a woman on welfare who had basically made bank off of running scams. Through a number of aliases (80, according to Reagan’s account) and social security numbers (dozens) this “welfare queen” was able to buy a Cadillac. He never flat-out said this was a black woman, but the Cadillac and the reference to Chicago housing projects were as clear a code as his “states’ rights” comment in Mississippi. Naturally, the story was later debunked by the media (there’s no way in hell you can live large on AFDC), but by then the damage had been done, powerfully fusing race, class and gender to kill support for the safety net. Americans are now much less likely to support governmental solutions to poverty, particularly when images associated with the poor are black and female.
Reagan believed that the leaders of organizations like the NAACP were “race merchants” whose only livelihood was generated by focusing on a mythical racism that didn’t exist. As a result, his door was never open to them. Instead, he supported an attempt to generate an alternative black leadership network – one rooted firmly in support for neoconservative principles. The Fairmont Conference, as it came to be called, was sponsored by Thomas Sowell and included a pantheon of black conservatives who have gone on to become major figures.
Among the many attendees was one Clarence Thomas. Though black conservatives (who should be differentiated from conservative blacks) have never had a strong constituency within African American communities, they thrived in Reagan’s administration and were often called upon to make statements on behalf of a constituency that in some crucial ways they never truly represented.
Remember the Reagan Democrats? Those disaffected working- class white voters who were most responsible for Reagan’s re-election in 1984? A group of Democratic operatives interviewed a number of white working class men and women outside of  Detroit in order to see what made Reagan Democrats vote for Reagan. Every social ill America faced, every problem of the Democratic Party was blamed on one group of people: African Americans. Why did America lose its moral standing? Black laziness. Why were Americans jobless? Black racial preferences. (I’m not quite sure how black people could both steal jobs  from real Americans and be too lazy to get jobs in the first place at the same time, but that’s another story.)
So even though these Reagan supporters detested Reagan’s actual policy preferences, they gladly supported Reagan because they felt he stood up for them against the various ills they explicitly associated with black people.
Finally, the following data points, taken from Adolph Reed’s The Jesse Jackson Phenomenon, bring it home:  Between January 1981 and the summer of 1984 white long-term unemployment increased 1.5 percent; among blacks, however, the rate of increase was 72 percent.
Moreover, if all budget reductions proposed by the Reagan administration had been enacted, the following programs with disproportionately black constituencies would have been cut by the following amounts: Legal Services, 100 percent; Public Service Employment, 100 percent; Aid to Families with Dependent Children, 28 percent; Employment and Training, 43.9 percent;  Compensatory Education, 61 percent; Work Incentive Program, 100 percent; Food Stamps, 51.7 percent and Child Nutrition, 46 percent.
So let me be clear. Inasmuch as I imagine that living the last years of one’s life as an Alzheimer victim would be horrible on one’s family, much less on one’s self, I would not wish President Reagan’s fate on anyone. My condolences go to his wife, and to his immediate family.
But I became politically aware during President Reagan’s tenure. I remember the impact his policies had on my neighborhood, my parents, and on me. For many of us, Reagan didn’t bring “mourning in America.” He brought the deepest darkest night.
About the Author, Lester Spence is an Assistant Professor in Political Science and Afro-American/African Studies at Washington University in St. Louis. Visit the www.africana.com/channels/blackworld.asp for more information.