Randy was one of the geniuses living in the neighborhood and when Senegalese Chef Pierre Thiam and I ran into him one afternoon we offered to host a small gathering to celebrate this new CD. He said sure and, “How about next week?” And so, the owners of Our Time Press and Legacy Ventures collaborated with Pierre to spread our wings, to fly high, and to open the doors on December 29, 2013 to friends and family of Randy Weston, a music king who was part of our extended family. 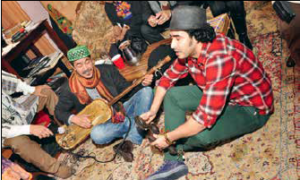 The idea was to promote within our community of one of the greatest musicians who ever lived via, “A Conversation with Randy Weston and Billy Harper” (in celebration of the new Weston/Harper album, “The Roots of the Blues”). We thought that pulling this off in just five days would be the highlight of a routine Christmas. We thought wrong. In fact, to put it in terms of a music movement, that Sunday afternoon was the sweetest of suites!

We decorated the house with Sunnyside Recording posters of Randy. The first guests to arrive were gifts, unto themselves: they were percussionist Candido de Guerra Camero (“Candido”), then 92, and Billy Harper, arguably the greatest sax player to ever come out of Houston. They were on time at 4:00pm. Other music luminaries flowed in, one after the other, to the beat and the sweep of African Rhythms. We were too in awe to even think about what had been accomplished in so short a time. Randy, Billy and Randy’s wife, the gracious Fatoumata, put out the clarion call, sans social media backup, and nearly 50 superstar musicians, blues impresarios and fans showed up. 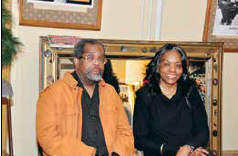 Seated in front of a tall oak mantle, the musicians orchestrated the afternoon, hitting perfect notes with stories about their lives and their love for the music, fielding questions and pitching their own. Mr. Weston returned often to his roots — his father, his mother, the training he received, and the home his parents purchased in 1946 on Lafayette Avenue, and so it was fitting that great food was cooking in the host’s kitchen. The appetizers prepared by chef Pierre Thiam were superb. And he was greeted with a round of applause when he emerged from the kitchen.

Randy was beaming, holding court in a big chair by the fireplace and surveying the fertile landscape of great minds, talents and hearts. He rose and went up to greet each person and made his appreciation known to the kitchen crew. It was palpable in our home just how much he was valued, and he was nourished by it.

The music masters talked about classical blues, traversing the world from Brooklyn to Africa to their hometowns of Brooklyn & Houston, and back. It still flows through the arterial connection of our home and distinct heritages. As Harper said, it’s in the DNA, in the atmosphere. Just waiting to be sounded out. 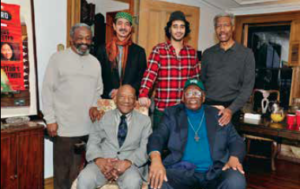 Gnawan musicians, introduced by Mr. Weston, performed sensational music cross-legged on the floor. Their playing never clashing with the soft sounds of The Roots of the Blues CD in the background. It was more than a memorable experience. It was like opening the door to all the music, the classics of the cultures, that ever was. It was like being in the presence of all the musicians of the Diaspora that ever existed.

When Candido, the great Cuban-born percussionist– one of the first to use congas in jazz music—first walked through that basement gate, we were opening the door for our return to childhood jazz-based roots. Everyone the master percussionist had ever performed with: Dizzy Gillespie, Stan Kenton, Billy Taylor, Babatunde Olatunji, Machito, Gene Ammons and so many more with whom he walked when they lived, entered in spirit with him. I was reminded that the Sunday celebration marked the 40th Anniversary year of Candido performing with Weston on the album Tanjah. The two musicians, great friends, first recorded together on Randy’s 1960 groundbreaking Uhuru Afrika classic album.

The soundtrack of The Roots of the Blues played throughout the afternoon and the conversations conjured the spirits of Billie Holiday and Mahalia Jackson – the only two women singers who brought Randy to tears. Guests communed in the presence of the likes of the late scholar and jazz aficionado William Mackey as well as the hosts’ own ancestors — with images, notes, diaries, journals, mementos scattered in corners of the parlor, on the piano and in “Pierre’s kitchen” when he used certain utensils.

Only thing missing were the children, peeking from the bannisters, in awe of grown people grooving and the presence of something colorful, great and grand, something for them to tell, to read, to sing. And to pass on. But author Carol Friedman remembered them, leaving on the piano two gifts in her Nicky the Jazz Cat series.

From beginning to end, four hours later, too cool and kind of blue, it was: all that jazz and classic blues, African food fragrances, good words and vibes.