Putting a Halt to Elder Abuse 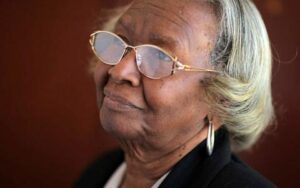 An African proverb wisely advises: Your children are your social security.  This means parents can be confident that their adult children will keep them housed, fed, and clothed in their golden years, so treat them well when they are growing.  But is this proverb true in today’s society?  Sadly, many elders must continue to work beyond age 65 and, even sadder, too many suffer in silence due to neglect and outright abuse by their adult children.

Take JJ (full name withheld), a man in his early 60s, who battles with his two brothers over the care of their elderly mother and father.  JJ’s parents have experienced abuse and neglect at the hands of his brothers who reside in the family home.

“My parents own a home in St. Albans, Queens in which my brothers live.” One brother is 60 years old, a functioning alcoholic, who holds a therapist position at a medical center in Brooklyn.  The other brother, 58, is unemployed.  JJ knows of incidents of verbal abuse meted on his father, now age 85, and mother, 83.

In 2012, he had his mother moved to a nursing home due to a chronic condition.  In 2013, JJ was awarded power-of-attorney for his parents.  “My brothers were not cleaning the home nor cooking for our parents,” is an example he gave of the neglect and abuse.

January 2016, he relocated his father to the same nursing home as his mother.  Since this move, JJ has worked methodically to remove his brothers from the family home.  He tried physical efforts which legally backfired on him.  Hence, his latest strategy is shutting off the utilities.  Mid-April 2016, the water was turned off.  Within the first week of May 2016, the electricity will be turned off.

These elders are fortunate that at least one child struggles to correct the situation.  What happens when all the adult children take advantage of an aging parent?  “Mary Jackson” (not her real name), a woman in her late 50s who lives in Bedford-Stuyvesant, Brooklyn (east of Malcolm X Blvd.) recalls the life of an elderly neighbor who lived in her block.

“It was drug related.  Her kids were addicted to crack and alcohol.  The lady, in her late 60s or early 70s, suffered with alcoholism that brought on a stroke.  This made her stop drinking.”    She used a walker within her rented home and was pushed in a wheelchair when moving outdoors.

The period in which “Mary Jackson” tried to intervene was between 2008 and 2010.  The [adult children] were in the house using crack, abusing and threatening her for money, explains “Jackson.”  This older woman had four adult children ranging in age from late 20s to 40s.

“The lady wouldn’t admit to the stealing and demands.  I noticed it going on for a couple of years before approaching her.”

Many elders tend to want to keep their household tumult under wraps even when it tumbles into the street.  “Mary Jackson” persisted in her inquiries, but the woman continued to deny any problems.

“I would visit her in her home and find the refrigerator empty. Her response was “I eat” and “Nobody is taking my money,” recollects Jackson.  The elder did ask Mary Jackson to buy her cigarettes and candy which were opportunities for Jackson to check on her physical and housing conditions.

“After so many declines for help, I eventually stopped asking about it but did call abuse hotline.  They did come one time, recalls Jackson.  The elder died in 2010.

Note: Both JJ and “Mary Jackson” are actual people who were interviewed.  They shared their experiences under the condition of anonymity.  The ages, locations, conditions, and dates of the elder abuse cases are their accounts.

Apparently, the tug of the umbilical cord in mothers and even fathers is too great to seek help and/or safety from abuse by family and acquaintances.  However, there is help and protection available.  NYC Department for the Aging (DFTA) offers several resources.  There are the senior clubs and senior centers located throughout the five boroughs.  Besides nutritious meals, comradery, exercise, trips, lectures, and arts and crafts, these centers are oases from harm.  The center directors and program assistants help the seniors to put pride aside to get the life-saving assistance they need.

DFTA’s website (www.nyc.gov/html/dfta/html) contains many uploaded publications.  Titles include The United States Department of Justice, Elder Justice; NYS Office of Victim Services; and Under the Radar: Elder Abuse Prevalence in New York State.  Under the Radar, published in 2011, identified New York City as having the highest reported rate of documented elder abuse (3.8 per 1,000).  Call 311 to connect with DFTA or visit a local senior center.

The NYS Office for the Aging’s (SOFA) website (www.aging.ny.gov) has a downloadable publication entitled Older New Yorkers Guide to Resources.  It has chapters devoted to legal assistance, nutrition, crime, and consumer complaints.  SOFA’s website has a link to NYS Office of Children and Families Services (OCFS, http://ocfs.ny.gov/main/psa/adultabuse.asp) regarding adult abuse.  Adult Protective Services is the division responsible for handling reported adult abuse.  There are six forms of adult abuse including financial exploitation, active & passive neglect, physical abuse, emotional abuse, self neglect, and sexual abuse.  DFTA is the local arm of SOFA. Call 311 to reach Adult Protective Services or DFTA.

In search of legal services for the elderly, this reporter sought out Bedford Stuyvesant Community Legal Services located at Restoration Plaza to learn this organization had recently merged with Brooklyn Legal Services (BLS) and renamed such.  The receptionist there explained they had an Elder Law Unit, headed by Frady Nachman, which operates from the 105 Court Street office.  Further, the receptionist acknowledged JASA Legal Services for the Elderly and Family Justice Center for their strong competencies in resolving elder abuse cases.